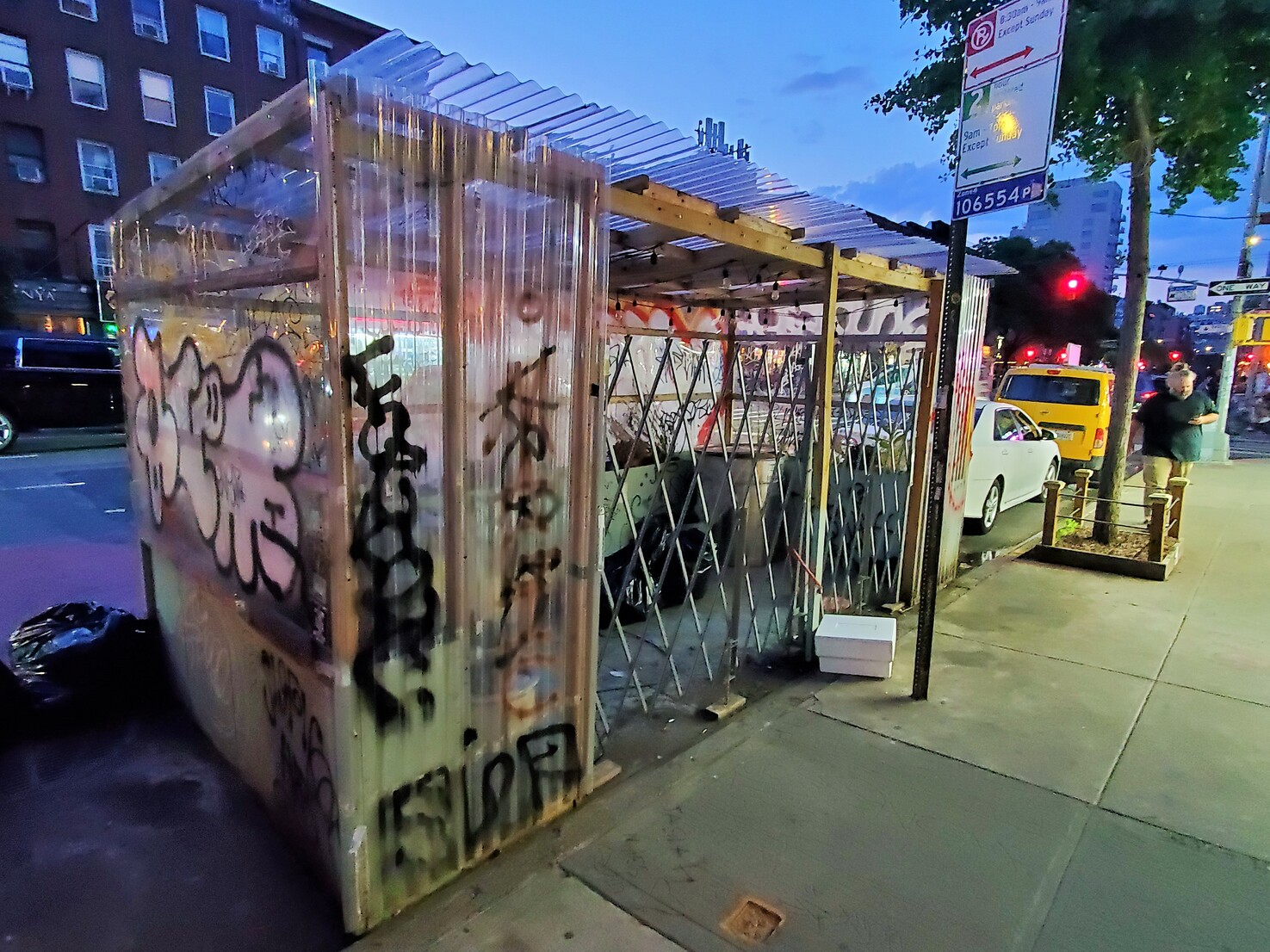 A restaurant shed on First Avenue in the East Village, apparently being used for storage. That's one thing about Open Restaurants that Mayor Adams says should not be allowed — though he supports the overall program. (Photo by The Village Sun)

After new lawsuit, mayor says he’s ‘a big supporter’ of outdoor dining but ‘modifications’ are needed

BY LINCOLN ANDERSON | After the city and state were slapped with a lawsuit to immediately halt “lawless” outdoor dining, Mayor Adams stood firmly behind the divisive program, declaring that “nightlife is a multibillion-dollar industry.”

Last Friday, a group of three-dozen frustrated residents from around the city filed suit, charging that the Open Restaurants program — launched during the depths of the COVID pandemic — should now end A.S.A.P. since there is no longer any health emergency to justify it.

Indeed, in March, Adams ended the Key to NYC vaccine requirement, which mandated that anyone over the age of 5 show proof of vaccination to enter an array of indoor venues, including restaurants.

Yet, speaking at a press conference Monday, Adams, when queried about the lawsuit, stood behind Open Restaurants. He said he’s “a big supporter” of the program, adding that some restaurants are still hurting financially from the pandemic and need the program.

“The question was about outdoor dining and the lawsuit,” he said. “I’m a big supporter of outdoor dining. As it has been reported previously over and over again, the nightlife is a multibillion-dollar industry. And our restaurant owners have gone through a very difficult period. Some of them are still back in their payments. And whatever I can do to help our restaurant industry that employs dishwashers, waiters, busboys and -girls, this is an important industry and it is an indicator of our city. And so the lawsuit is going to play itself out. But I’m a supporter of the outdoor dining.”

However, the mayor added, “I think we need to modify it because some of the outdoor dining locations have become a hazard. They have become places that’s not suitable. And I think there’s a way to modify to standardize what the structure should look like, and they have to be used. It can’t be used for storage. It can’t be used for all other things. But I’m a supporter of the outdoor dining. And I believe it was a lifeline for the restaurant industry.”

The lawsuit, filed by attorney Michael H. Sussman, notes that the mayor’s and governor’s justification for continuing Open Restaurants on an emergency basis has shifted — from health and a need for social distancing to economic reasons.

“In recent months,” the suit states, “[the city’s and state’s] chief executive officers and other leaders have relied upon an economic rationale for extending [Open Restaurants]. However, such a rationale does not provide a sufficient legal basis for an emergency order in New York absent the existence of an underlying public health or natural emergency, neither of which now exists.

“In reality, no public health emergency exists,” the suit argues, “and, therefore, there is no premise for [Open Restaurants].”

Another day in Hell’s Kitchen and the reality of zero regulation outdoor dining. pic.twitter.com/B0TczRBvwM

New York State and City have suspended or abandoned all other pandemic emergency orders and programs — including test-and-trace, vaccine and mask mandates, home food deliveries for the elderly and shut-ins, and free hotel rooms for those with COVID who need to self-isolate, eviction protections and enhanced unemployment benefits. However, the plaintiffs charge, emergency orders “continue to be selectively issued for the benefit of the restaurant and nightlife industries.”

Earlier this year, the City Council was poised to move ahead with crafting legislation to make Open Restaurants permanent. But that effort was abruptly paused indefinitely in March when an earlier lawsuit against outdoor dining brought by community residents, and again represented by Sussman, was victorious in State Supreme Court. Ruling on that case, Justice Frank Nervo said the city had failed to do a proper environmental impact study for the massive program, which has spawned 12,000 dining sheds around the city, many of them clustered in Downtown Manhattan. The Adams administration is currently appealing that earlier ruling.

While the mayor is a fan of outdoor dining — previously gushing that it makes New York City “just like Paris” — the lawsuit plaintiffs and many residents, for their part, complain that the roadway sheds cause noise, trash, rats, public urination, a loss of parking and curbside access and make it harder for emergency vehicles to navigate streets and respond to incidents.

In March, the LES Dwellers made a video spoofing a beret-wearing and mustachioed Adams and Ydanis Rodriguez, the Department of Transportation comissioner, eating at an outdoor dining shed as rats nearby feasted on discarded junk food and smelly cheese. Shown serving the two as a waiter was Andrew Rigie, the head of the New York City Hospitality Alliance, the restaurant industry’s main lobbying group.