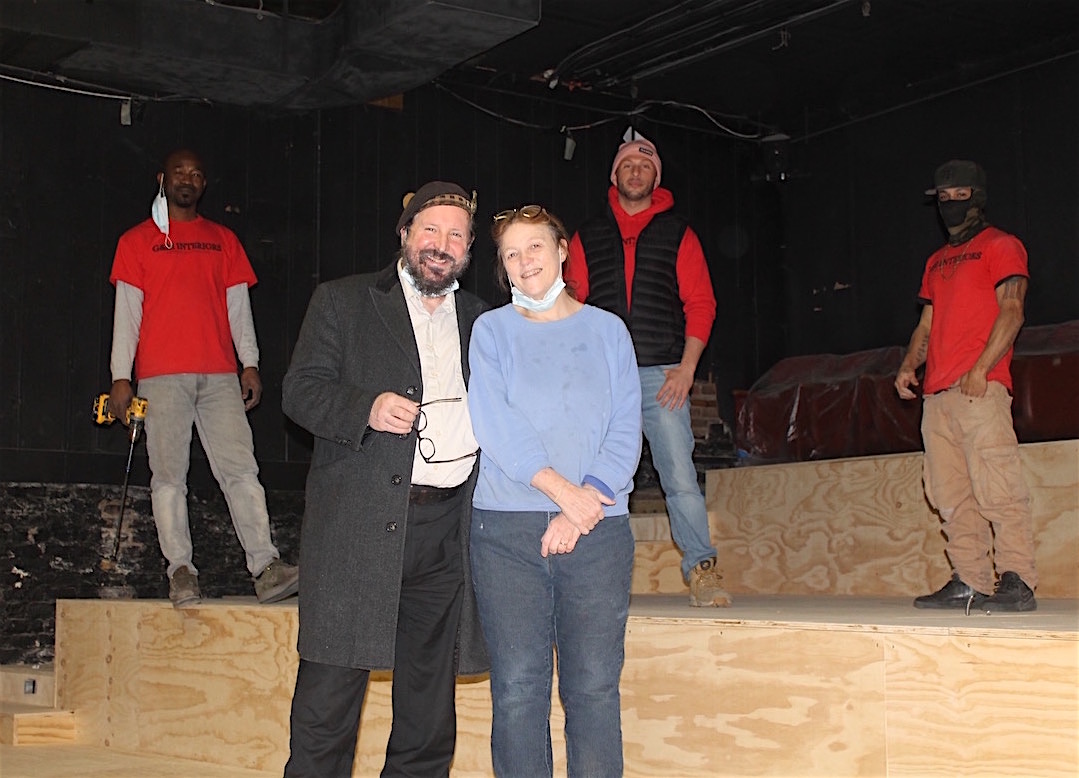 Lorcan and Genie Otway in the Theatre 80 space in early December with, from left, master builder Oren Wilson, contractor Greg Markarian and apprentice Rich Hernandez. The carpenters were in the process of transforming the space into a cabaret layout. (Photo by The Village Sun)

New life as a cabaret for Theatre 80 St. Mark’s

BY LINCOLN ANDERSON | Life is a cabaret, old chum. … Or at least it will be at Theatre 80 St. Mark’s for the foreseeable future during the pandemic.

Because live-performance venues in New York City are not allowed to reopen, Lorcan Otway, the East Village theater’s owner, has taken a novel approach. He has yanked out six rows of the venue’s seating and converted it into a roughly 50-seat cabaret dinner layout. There will be tables and chairs — spaced apart, of course, in a socially distanced manner.

“It wasn’t physically hard, it was emotionally hard” to remove the seats, Otway noted. “We’ve always considered ourselves an Off-Broadway theater. That was hard to give up.”

It’s not the first time Otway has been involved in overhauling the theater. His father deepened the space by digging down about 6 feet, and the young Otway pitched in.

“When I was 7 years old, Dad and I dug this all out by hand, with several artists, too,” he recalled.

Music at the new cabaret space will be “incidental,” as in, considered background music, which is allowed under the State Liquor Authority’s pandemic regulations. The theater, however, won’t be able to advertise the shows or charge for tickets. Musicians will be paid by audience donations — not by bucks dropped in a passing bucket but by diners doing Venmo on their phones.

Also to ensure safe COVID-era conditions, the venue has been outfitted with a new high-powered system that will completely recirculate its air every two minutes with a mix of filtered and fresh air.

Before it launches as a cabaret, though, the space will start out simply by serving food. The cuisine will be a mix of fare from Foxface sandwiches, one of Theatre 80’s tenants, and British and Irish pub food by chef Domingo, formerly of Telephone Bar.

Also on tap is a virtual fundraiser. In the Theatre 80 cabaret’s first big event, it will host a virtual benefit for a cause associated with Middle Collegiate Church, which was gutted by fire in early December.

A tentative date for the affair, which will be all live, has been set for Sat., Feb. 20.

In April 2015, after the Second Ave. gas explosion that killed two men and destroyed three buildings, Theatre 80 hosted a benefit for the disaster’s victims, including the displaced tenants. Upon seeing the destroyed church, Otway knew it was time for a repeat performance.

“When we went to see the church — catty-corner to the explosion that we did the benefit for — it’s the first thing we thought of. We’re part of the neighborhood,” he said.

The virtual concert will be done mostly inside the theater space. The performers will each have a set time to come in individually or in groups to do their acts. There will also be one or two performances done outside in front of Middle Collegiate Church. Victorio Rios, “a soprano in California,” will also Zoom in for the fundraiser, Otway said.

Spoken-word artist Penny Arcade will be on the bill.

“She’s one of the most progressive people I know,” Otway noted, “but she’s a free thinker.”

Dennis Creary, president of Blacks on Wall Street and a board member of the foundation for the theater, the Howard Otway and Florence Otway Opportunity Project a.k.a. HOFOOPro, is organizing the virtual benefit.

The church has insurance, which will cover much of its rebuilding costs. So, Creary said, in terms of the fundraiser, the idea is to work with Middle Collegiate to identify a cause that is important to the church. One option might be the Women’s Prison Association, which occupied the building just south of the church and whose 22 residents were displaced by the fire.

Creary said, in addition to Penny Arcade, N’Kenge will perform in the fundraiser. The star was playing The Moon in “Caroline, or Change” when the pandemic shut down Broadway. Cabaret singers Shana Farr and Leslie Middlebrook Moore, another HOFOOPro board member, will also lend their talents.

Moving forward, the Theatre 80 cabaret will feature country-western music nights and also be the home base for the Manhattan Symphony Orchestra. In addition, the space will still have the “political programming” that Otway, a big free-speech advocate, relishes.

Inside, the cabaret space is terraced, since it would have been too much work to flatten out the theater’s sloped seating area — plus, at some point, hopefully, the theater’s seats will be reinstalled. Brass railings have been added, but not too many, so as not to interfere with sight lines. On each table, Otway plans to add a small light featuring a cast of the iconic “absinthe girl.”

Absinthe is one of the signature drinks of the William Barnacle Tavern, which is also located in the theater building.

The pandemic has been a disaster for the theater but, of course, has also hurt the other parts of the Theatre 80 complex. In addition to the tavern and Foxface sandwiches, the building also contains the American Gangster Museum and a bed and breakfast.

Along with his wife, Genie, Otway keeps the entire operation humming. Their outdoor seating area is definitely a cut above the norm.

Sitting outside Theatre 80 you can enjoy heated benches while having a hot buttered cider, with absinthe, whisky or rum or, if you prefer, virgin.

The street structure has a nautical theme, featuring boat paintings by Otway, fittingly framed by winter beach foliage. The Canadian Dominion flag from the 1920s proudly flutters from a pole. This was the flag Prohibition-era rum-runner ships flew so the U.S. would not stop them, Otway explained.

When Genie and Lorcan are outside in the dining structure, friends and neighbors often stop by and chat or say hi in passing.

“The idea of dining on the street has done a lot to bring people together,” Otway noted.

The William Barnacle Tavern did not sell takeout drinks early on during the pandemic because, as Otway noted, Governor Cuomo was infuriated at the non-socially distanced crowds on St. Mark’s Place in early June.

“It was too dangerous,” he said, “as we were responsible for drinkers within several hundred feet of our door, if we sold the drink or not.”

Like everyone else in the hospitality and entertainment business, Otway’s business is suffering. Cuomo’s forcing bars and restaurants to close their outdoor seating by 10 p.m. is not helping.

“They’ve cut out our best hours,” he said. “Bars make the most money between 11 and 4 in the morning.”

At the same time, he said, “I’m not anti-Cuomo. I think he’s doing his best.”

Having to pay property taxes, though, during the pandemic — when businesses are being restricted in their operations — is totally unfair, in Otway’s view. He has to make two hefty payments per year, totaling $150,000. The city should simply have deferred the property tax, he said.

“It’s absolutely a taking, it’s a crime,” he said, indignantly. “You can’t not allow people to do business and then charge them a tax.”

Pre-COVID, theaters were already facing a crisis, as Otway tells it.

“We have lost 75 theaters in the last 10 years,” he said. “COVID is just the latest chapter for Off-Broadway. There has been a war on the middle class and small businesses. In any other country, we’d be subsidized,” he said of theaters like his.

In the larger picture, none of what is happening is random, in Otway’s view, but part of a relentless real estate juggernaut that eyes Manhattan’s turf as the ultimate prize.

“COVID’s the final push for the greatest land grab since the American Indians,” he said. “The working class are being driven out of this neighborhood. This was a much more diverse neighborhood in the ’60s and ’70s because you had black ownership. You had two black theaters.”

Otway referred to other local businesses that have gotten community support, like Astor Place Hairstylists and The Strand bookstore. Right before Thanksgiving, when the barbershop was set to shutter, a group of wealthy customers swooped in to fund it for at least the next 75 years. In October, Nancy Bass Wyden, The Strand’s owner, saying that the store’s revenue had dropped by 70 percent, begged book lovers to make purchases, and they answered in record numbers; the next day, the store saw its highest sales ever for a single day in October and its Web site crashed due thousands of orders.

For his part, Otway has some longer-range plans he hopes could put Theatre 80 on firm footing into the future. He is exploring naming rights, which would involve a corporate sponsor — such as, say, the Capital One Center for the Performing Arts at Theatre 80, for example.

He is also looking into branded events, like a summer festival, that the corporate sponsor would also put its name on.

Above all, Otway wants theater — and Theatre 80, in particular — to be valued for the cultural treasure that it is.

“Theater has a place in the community beyond four walls and a stage,” he said. “There’s a soul, it’s a living tradition. People are on a stage where Gary Burghoff performed, Bob Balaban and Patrick Stewart performed. Billy Crystal started here as an usher. Emma Thompson and John Lithgow filmed ‘Late Night’ here two years ago.

“We have to stop wringing out hands and get out and fight for these institutions.”

On the positive side, Otway confidently predicts that, thanks to the vaccine’s arrival, there will be a booming economy as soon as September. He didn’t say what he based his opinion on, but he was bullish New York City will soon bounce back.