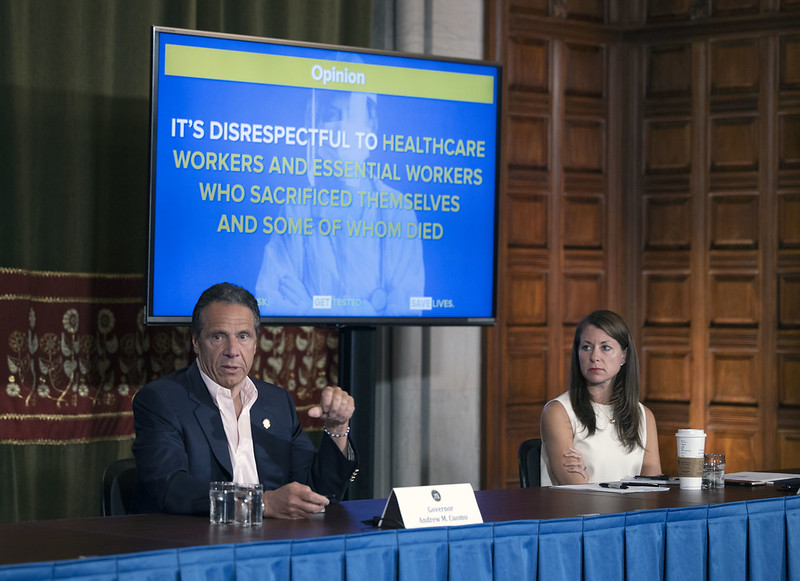 Governor Cuomo, speaking on Sun., June 14, warned that irresponsible bar and restaurant operators who allow crowds to congregate outside their premises will lose their liquor licenses. At right is Melissa DeRosa, the secretary to the governor. (Photo by Mike Groll/Office of Governor Andrew M. Cuomo)

And for dudes and dudettes chugging brews and drinks on the street, the governor is putting them on notice, too, that they could face individual penalties.

Above all, Cuomo says if the situation continues, he could “reverse” the reopening for Manhattan — and also for the Hamptons, which has seen similar crowding outside bars.

The Phase One reopening for New York City — ending the shelter-in-place “lockdown” — was June 8.

On Sunday, the governor said New York State is doing great, so far — “the best in the nation,” as he put it — in terms of reopening while avoiding a spike in coronavirus cases. But he warned that he doesn’t want that hard-won progress to slip backward. Some other states that have reopened, such as Utah and Oregon, have seen COVID-19 spikes and have had to shut down again.

“You get undisciplined, you’ll see those numbers change in a week,” Cuomo said.

He said there had been an avalanche of complaints from around the state about large gatherings, especially outside bars and restaurants, social distancing being violated and people not wearing face masks.

“We have gotten 25,000 complaints…of businesses that are in violation of the reopening plan,” he said, calling it a record number for a short time period.

“What’s alarming about the 25,000 is the volume, but it also shows how smart people are and how offended people are that they’re calling and complaining,” he noted. “They’re afraid for themselves. They walk past the business. They see the businesses violating the rules and they are saying, ‘My health is jeopardized — my health,’ and that’s why they’re complaining.”

Videos of the scofflaw bars are “not hard to find,” Cuomo said.

State Senator Brad Hoylman, who has a bill pending to extend takeout alcohol for two years, said that, after seeing the videos, he is now reconsidering the bill.

“They’re also violating the law,” he stressed, adding, “A bar or restaurant that is violating these rules can lose their liquor license.”

State Liquor Authority inspectors are out in the field checking out the complaints and a task force of state investigators is also on the case, Cuomo noted.

“We are not kidding around with this,” he emphasized. “You’re talking about jeopardizing people’s lives.”

The crackdown will extend to individual bros, too.

“If you are an individual you can’t violate the open-container law,” the governor warned. “You can’t stand on the sidewalk drinking a beer.”

He added that social distancing and wearing face masks in public are the law and that failure to do so are “legal violations.”

That applies to cops, as well, Cuomo noted. Protest marchers have complained that police are mostly not wearing face coverings.

“Protesters and police, the law applies to you,” the governor said. “Police department, your job is to enforce the law. Why don’t you follow the law? It’s a very bad signal when you see police people who are not wearing a mask and not following the law.”

Cuomo put the onus on “local government” to monitor compliance with the phases of reopening, as well as the wearing of face masks.

But Cuomo said rather than “reverse a statewide position” — as in, roll back the reopening for the whole of New York State — he would be targeted about it.

“I’m going to reverse it in those areas where those local governments did not comply with the law,” he explained.

“Manhattan and the Hamptons are the leading areas in the state with violations. They are rampant and there’s not enough enforcement.”

The governor also accused revelers who refuse to wear masks of dissing hard-working healthcare workers who have been putting their lives on the line.

“It is just disrespectful not to wear a mask,” he said. “It’s disrespectful to the healthcare workers and the essential workers who sacrificed themselves for 100 days, some of whom died and gave their life to crush this COVID virus.

“It’s also disrespectful to the people who you could infect,” he added. “‘Well, I’m 25, I’m a superhero, it’s not going to bother me.’ First of all, you’re wrong, it could kill you, but that’s your life. It’s disrespectful to the other people who you could infect. It’s disrespectful to a parent, to a grandparent, to a cousin, to a brother, to someone who you run into on the sidewalk and you don’t even know, but happens to have a compromised immune system because they’re battling cancer or because they’re battling H.I.V. and you infect them and you wind up killing them.”

Mayor de Blasio, through a spokesperson, fired back at Cuomo’s remarks, arguing that “imprisoning” people is not the solution.

In an e-mail to the media, a City Hall spokesperson said that since March, the de Blasio administration has been “doing aggressive outreach to restaurants and bars in the East Village to ensure they are aware of the relevant PAUSE guidance.

“This includes distributing ‘Take Out, Don’t Hang Out’ posters for all these biz to display in their windows,” the rep wrote.

“Our social distancing ambassadors also assisted local bar owners who needed help with crowd/line management — including chalking sidewalks so customers knew where to stand 6ft apart from each other … .”

On Monday, the mayor was out sick, the first time for him during the coronavirus pandemic.