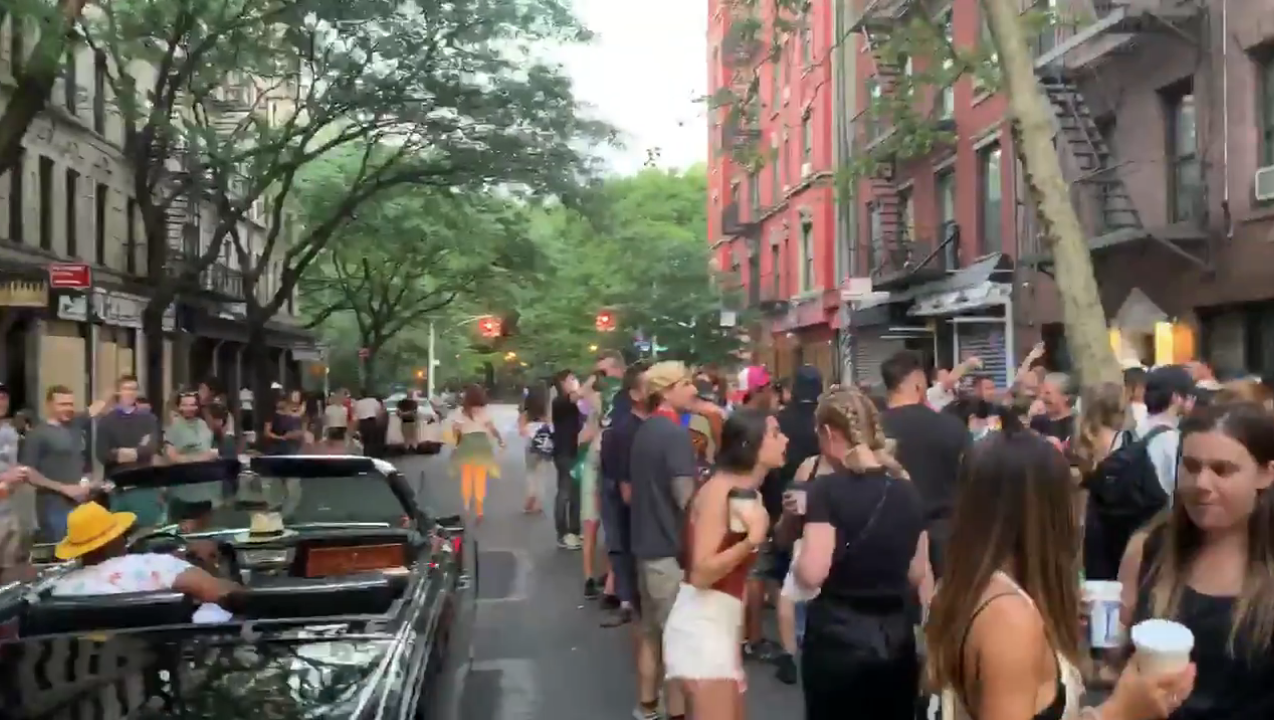 A screen grab from the video showing crowds not practicing social distancing — or wearing masks — outside East Village Social, on St. Mark's Place.

BY THE VILLAGE SUN | To-go booze could go bye-bye, if it was up to Brad Hoylman.

The state Senator is furious after seeing a video showing social-distance defying revelers partying on St. Mark’s Place and packing the street.

Hoylman’s district contains the East Village. He also happens to be the main sponsor of a bill to extend takeout alcohol for an additional two years. But now, he says, he’s seriously reconsidering that idea.

In March, per Governor Cuomo’s executive order, the State Liquor Authority temporarily changed its regulations to allow bars and restaurants to offer both takeout and delivery alcohol. The order originally was set to expire on Sat., June 27, unless it gets extended, which Cuomo certainly can do.

Instead of the governor having to repeatedly extend the provision, though, Hoylman had wanted to offer a longer-term extension through a legislative change.

However, the state senator now is saying he might modify his bill to allow alcohol delivery only — and just scrap the takeout part. Plus, he says, it’s time to crack down “immediately” on people drinking outside and turning New York into Bourbon St. And he said Cuomo should not grant an extension if the problem persists.

The video, published by local blog EV Grieve, shows crowds lining the street between First Ave. and Avenue A on Friday night. Many are not wearing masks as they schmooze and swill alcohol from to-go cups.

The action in the video is centered around East Village Social, a bar known for its live music. However, during the “New York State on Pause,” the bands have been playing on the sidewalk in front of the place, drawing ever-larger crowds.

A month ago, The Village Sun reported that bands — like the East Village All-Stars, featuring a Satchmo-styling Smidge on trumpet — had been playing outside the bar; but the crowds in the street were smaller back then.

Hoylman called the video — and others like it, showing crowds outside bars in other parts of town — “disturbing.”

“It’s dangerous and irresponsible to abandon social distancing while the pandemic continues to rage,” Hoylman warned. “The State Liquor Authority should immediately bring inspectors to Manhattan to assess the situation and work to enforce open-container laws.

“New Yorkers are dying every day from COVID-19,” he stressed. “As the senator who represents much of the heart of Manhattan, I know small businesses are hurting. But there’s no excuse for the large crowds we’ve seen congregating on St. Mark’s Place and elsewhere in Manhattan. In the middle of a pandemic, that’s putting lives at risk. … A liquor license is a privilege that comes with a significant responsibility to protect the public interest.

“If these violations of social distancing continue, Governor Cuomo should immediately reconsider his executive order permitting takeout and delivery alcohol service,” Hoylman declared. “As the Senate sponsor of legislation that would extend this executive order for two years, I’m reassessing whether to amend it to limit it to alcohol delivery only and ban to-go sales, to have the legislation apply only outside New York City, or to withdraw the bill altogether. In doing so, I will continue working closely with community boards and local stakeholders to determine the best way forward.

“My bill was meant to be a lifeline for restaurants and bars facing extinction because of COVID-19,” Hoylman stated, “not an opportunity for these establishments to totally disregard open-container laws and social-distancing requirements. The failures of these establishments to follow the law will create a public health disaster, not to mention creating noise and quality-of-life issues.

“Restaurants and bars need to get their act together,” he declared. “Public health is too important to get this wrong.”

Meanwhile, on the other side of Downtown, takeout alcohol is also raising alarms in the West Village, which is also in Hoylman’s District 27. In an op-ed piece on Friday in The Village Sun, local resident Nancy Pasley said bar and restaurant owners on Hudson St. and Seventh Ave. South are “boldly hosting on-street drinking parties.”

“Many bars and restaurants now put out multiple tables and chairs — by the dozens, in some places — for the revelers,” Pasley wrote. “The crowds completely block the sidewalks, forcing pedestrians into the street, even those using wheelchairs or with babies in strollers.”

Some places are blaring loud music outside, too, she said.

In her piece, she argues that takeout alcohol should be cut off once bars and restaurants reopen.

“In short, a permission intended as a temporary lifeline is being widely abused,” Pasley wrote. “Rather than extended, it should be terminated once the restaurants and bars are allowed to serve at tables indoors and the reason for it has expired, and the abusers should be penalized.”