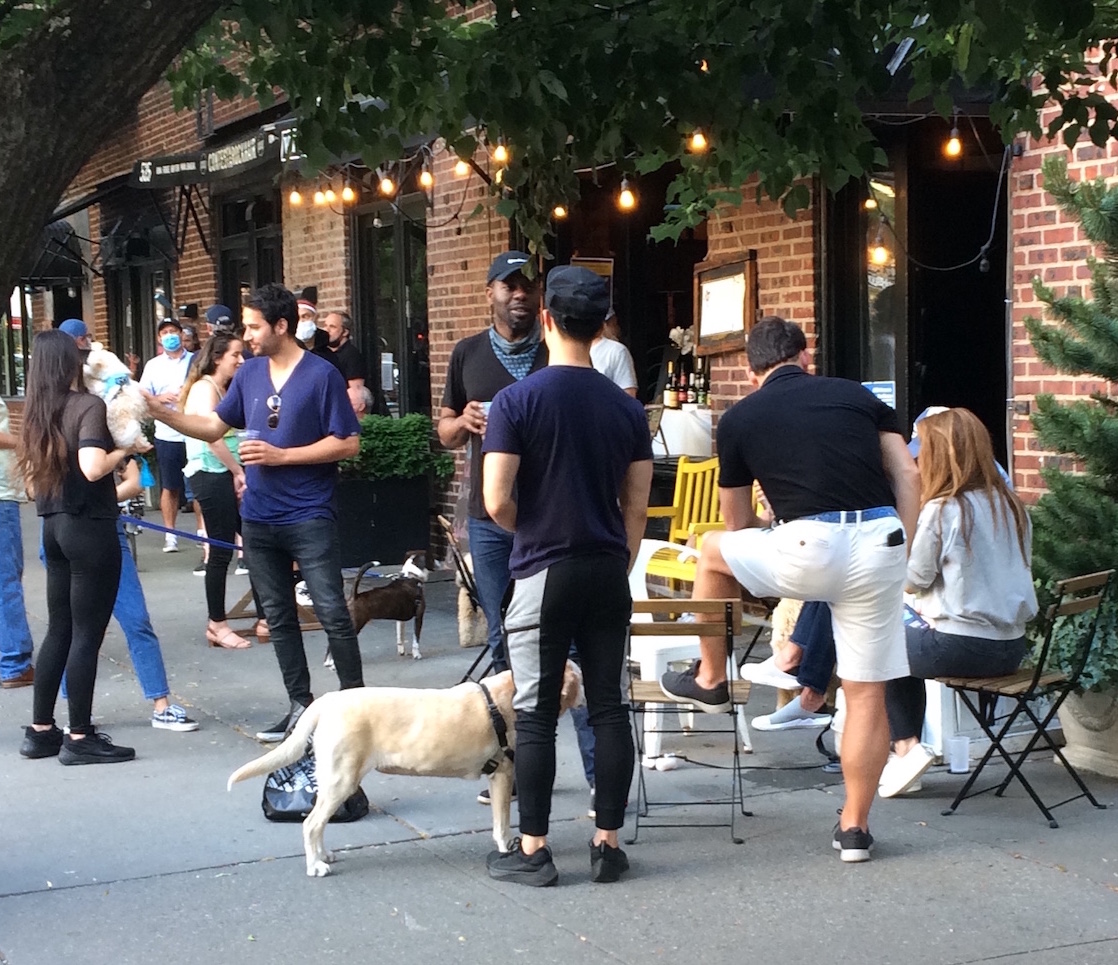 A crowd with takeaway drinks — which they didn't take away — jammed the sidewalk outside Wild, at Hudson and Charles Sts., on Sun., June 7. Most were not wearing face masks. (Courtesy V.C.)

BY NANCY PASLEY | Our restaurants and bars have had operations severely curtailed during the pandemic shutdown, which isn’t over yet. In a well-meaning effort to help them, they have been allowed to sell takeout drinks, but only with food, not snacks, and in a “sealed container.” And, of course, customers are to maintain social distancing while taking orders.

Specifically, according to guidelines issued by the State Liquor Authority in March, bars and restaurants “should not be open except for ‘to-go’ or delivery service, with customers in the establishment solely for the purpose of pick-up, with NO consumption of food or drink, and NO lingering [emphasis in the original]… in service of the policy goal of preventing the congregation of people to slow the spread of coronavirus.”

Now that the weather has warmed up, however, too many establishments ignore these restrictions and are boldly hosting on-street drinking parties and full-scale outdoor dining, resulting in chaos in Greenwich Village.

Many bars and restaurants now put out multiple tables and chairs — by the dozens, in some places — for the revelers. The crowds completely block the sidewalks, forcing pedestrians into the street, even those using wheelchairs or with babies in strollers.

These parties are loud and raucous. Some establishments even have blaring loudspeakers.

Many of these are places that have existing sidewalk-cafe licenses and are fully aware of license terms, including maintaining adequate open sidewalk space and no music. But they are also fully aware that the licensing agencies, the city’s Department of Consumer Affairs and S.L.A., are chronically underfunded and slow to take enforcement action.  Nor are the police — who in the past have had to shoulder the enforcement job — now in a position to do so.

What’s more, there is a pending state Senate bill, S 8392, that would extend takeout drinks for two years after we have completed the reopening. The situation may be different Upstate or in other areas of the city, but for us in the Village it would perpetuate a disaster. At a recent Community Board 2 hearing on the bill (held virtually on Zoom), all the residents in attendance spoke against it and all the board’s State Liquor Licensing Committee members opposed it, offering multiple examples of the serious ongoing problems.

In short, a permission intended as a temporary lifeline is being widely abused. Rather than extended, it should be terminated once the restaurants and bars are allowed to serve at tables indoors and the reason for it has expired, and the abusers should be penalized.

To compound the problem, there is a pending City Council bill, Int. 1957-2020, that would allow restaurants and bars to take over more streets and sidewalks for their businesses. It is intended to operate as soon as we are in Phase 2 of the reopening, in just a few weeks.

Permitted locations would be designated by the city’s Department of Transportation, which is supposed to listen to restaurant associations that want spaces designated but is not required to consult, much less ask approval from, community boards, block associations or anyone else representing the public.

If an applicant tells the Department of Consumer Affairs that a space is designated by D.O.T., D.C.A. must grant a license. Similar self-certification has led to multiple problems in many construction projects. Both agencies already have too many other responsibilities to give this adequate attention.

The bill further would give the Department of Health and Mental Hygiene a mere seven days to establish requirements for operations, which presumably would have to include bathroom availability, noise and odor control, hours of operation and much more. This is an all but impossible task. And there is absolutely no provision for an effective enforcement mechanism — that is, no more than there has been for the rules for takeout drinks.

Given the existing abuse of the takeout drinks situation, one does not have to be a confirmed cynic to predict that this will be disastrous for Greenwich Village. At the Community Board 2 hearing on the proposal, restaurant and bar owners were extremely eager to take over entire sidewalks, as well as streets.

“No one drives on my street,” one of them assured.

And the operators said they were looking forward to the hours being from morning until late at night, seven days a week — and even to making this permanent despite its billing as temporary during the coronavirus pandemic.

Meanwhile, again, no residents at the meeting spoke in favor of the plan — all spoke strongly against.

It seems highly unlikely that the area’s many problem bars and restaurants will behave any better than they have so far.

Bars and restaurants in our neighborhood, and indeed in much of the city, are typically on the ground floor of residential buildings. People live upstairs, next door, around the corner. We need the streets and sidewalks, and we use them daily. We go for walks, we run errands, we take our children out in strollers, we ride our bikes, we depend on stores that need traffic lanes and parking spaces for deliveries. These are the uses for which the streets and sidewalks are intended. They should not be taken over by private interests.

Yet the press releases by elected officials praise the financial benefits to eating and drinking establishments without any mention of protection of the public interest.

We do love our local restaurants and bars and want to see them survive, even though some, by their disregard for their neighbors, do not seem to love us. We also love our peace and quiet and our quality of life, without which we would not want to live here. The public interest should not be sacrificed to private financial interests. This city proposal, in particular, needs to be greatly modified with serious input from the public, or just voted down.

If you agree, now is the time to contact your city and state representatives.

Pasley has lived in Greenwich Village since 1971.