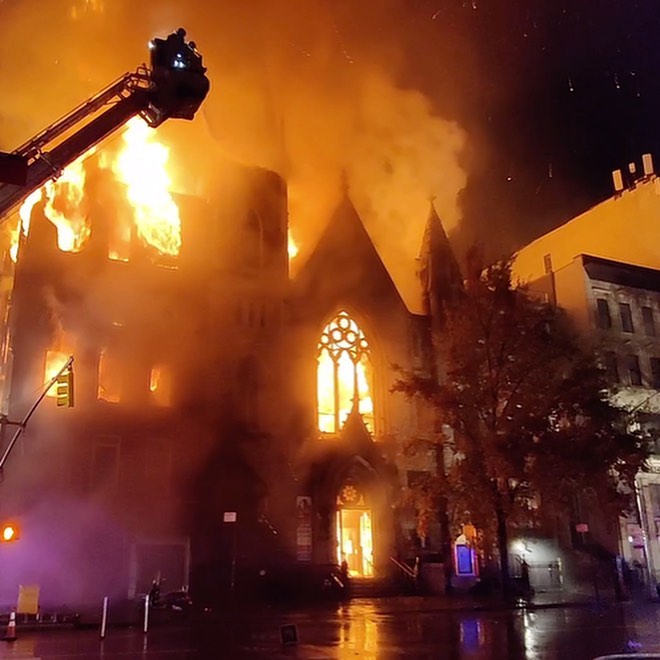 The blaze — which rapidly rose to a six-alarm fire — reportedly started in a vacant five-story building at the southeast corner of Second Ave. and E. Seventh St. Ten months ago, that same building was gutted by a fire, though that time the flames did not spread to the church.

In Saturday’s conflagration, both the house of worship, which was built in 1892, and the abandoned building suffered roof collapses. Middle Collegiate Church’s Tiffany stained-glass windows were destroyed.

During the pandemic, the congregation has been worshiping online.

The building to the south of the church, 110 Second Ave., houses the Women’s Prison Association. News reports described a chaotic early-morning scene as women in slippers and robes fled in panic onto the street.

Twenty-two women who were displaced from the W.P.A. residence have reportedly been relocated to another of the organization’s residences, at 347 E. 10th St. near Avenue B. Founded in 1845, W.P.A. was the nation’s first organization devoted to helping formerly incarcerated women redefine their lives.

The fire caused the closure of several blocks of E. Seventh St. and Second Ave.

Due to the fire at 48 East 7th Street in Manhattan the following streets are closed.

In a statement, City Councilmember Carlina Rivera said the community is “heartbroken” over the horrific fire.

“Today, the East Village community is devastated and heartbroken at learning of the six-alarm fire that damaged or destroyed at least three buildings along Second Ave. between E. Seventh and E. Sixth Sts.,” she said. “Two of the buildings — Middle Collegiate Church, which appears to have been devastated, and the Women’s Prison Association (WPA)’s Hopper Home, which received smoke damage and other possible effects — are pillars of our community.

“We do not know the cause of the fire, which remains under active investigation. We hold the firefighters who were injured in the blaze in our thoughts, and I want to thank all the first responders who risked their lives to extinguish this fire. While I am thankful that no deaths have been reported, my heart is so very broken for the victims of this tragedy, who have been generational leaders in our community for social justice and equality.

“My office is working closely with the FDNY, OEM, NYPD, DOB and all other relevant agencies as they continue to assess the damage to 47 E. Seventh St. — which was vacated earlier this year — Middle Collegiate Church and the Hopper Home,” Rivera said. “I promise that we will ensure this incident is investigated thoroughly. We are also working to ensure that the 22 women who were residing at the Hopper Home, and had to evacuate to WPA’s nearby family shelter, are provided with stable housing options and support. Donations to Middle Collegiate Church and WPA can be made at middlechurch.org/donate and wpaonline.org/donate, respectively.

“Middle Collegiate Church is one of the great, landmark institutions of our community, having served New York City for almost 400 years and for over a century providing the East Village with spiritual and physical resources,” Rivera said. “They’ve taken care of so many during our city’s darkest moments, from 9/11, to Superstorm Sandy, to the Second Ave. Explosion. And the Women’s Prison Association has provided housing, employment and assistance for justice-involved women for generations. The damage this fire has caused goes far beyond the structural effects alone.

We are devastated and crushed that our beloved physical sanctuary at Middle Collegiate Church has burned.

And yet no fire can stop Revolutionary Love. pic.twitter.com/R8D3NVjAiY

“But we know that our East Village community is strong and we will be there beside them every step of this recovery, however we can. As we begin this difficult work, I am inspired by the words of Middle Collegiate Chruch’s Reverend Jacqui Lewis — someone who I’ve considered a close friend and adviser for many years — when she said this morning that, ‘No fire can stop Revolutionary Love.’ I will take that spirit into my heart in the coming days and weeks as we continue our response and recovery.”

In the wake of the disaster, the church will hold an online event on Zoom on Saturday at 7 p.m. called “A Space to Grieve.” (To join, use the link bit.ly/space-to-grieve⁣ or visit the church’s Web site.)

“While we know the Church is not a building — we also hold that this physical space has been the site of revolutionary work,” a message on the church’s Facebook page says.

“It has been the connecting point for so many around new ideas, around progressive theology, around dismantling white supremacy.

“It is where a lot of you found God — right in those pews.

“It is where some of you felt safe, known, and loved for the first time. ⁣

“So come: Cry. Howl. Sob. Just bring yourself, and know that — however you’re feeling — it will be held in tender care.⁣

“We are still family, this fire doesn’t change that. God weeps with us in our grief. May God surround us in love.⁣”