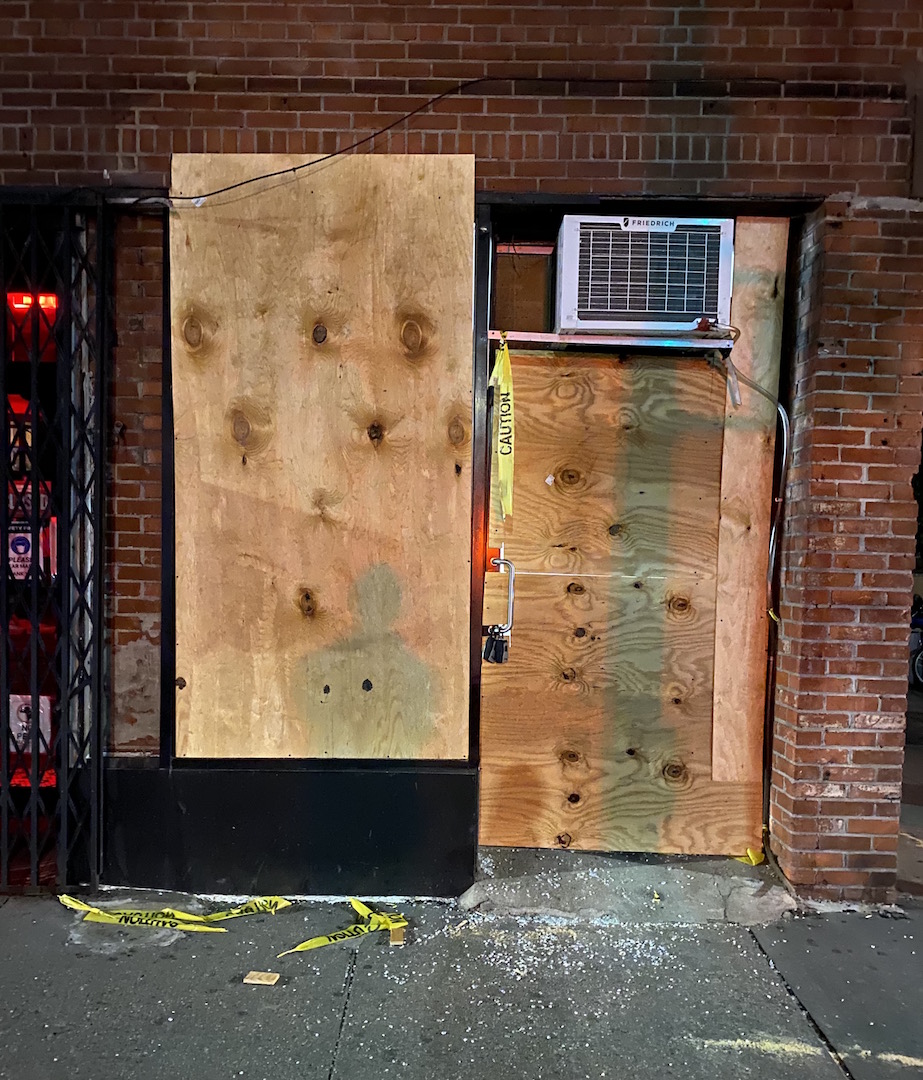 What a bummer: The Mobile Guru Verizon shop at 11th St. and Sixth Ave. was looted. (Photo by Arthur Schwartz)

My elation turns to anger

BY ARTHUR SCHWARTZ | At around 6 p.m. Monday, just as I finished interviewing Brooklyn Borough President Eric Adams on my WBAI radio show, I heard chanting coming down 12th St.

I walked to my stoop and watched 3,000 to 4,000 people march by, holding signs, chanting.  The crowd was mostly young, mostly white, mostly wearing masks, and respectful of the community they were proceeding through, and of the memory of George Floyd.

I assumed that because of the looting on 14th St. the night before, at the GameStop and other stores (looting which caused Republic Bank to shut down for the week), that the police were keeping crowds off of 14th St.

My youngest daughter watched with me and even joined the chanting. Her high school had had two administration-run meetings last Friday and Monday, which were scheduled to be short but which the students had forced to proceed for hours.

I was in high school in 1968 when Dr. King was shot, and many poor communities went up in flames, and when 15-year-olds like me were forced to think about racism, and how deeply ingrained it was in our society.

It was good to see my daughter, and her slightly older sister, having to grapple with those issues without being lectured about them by a parent. And the march, for them, and for me, was an affirmation about the future.

Then, at 10 p.m., I went out for a walk, ahead of the curfew. When I got to Sixth Ave. and 12th St., I noticed that there were no garbage cans. I also noticed that not one car was parked on the street.

Then I got to the corner of 11th St. and Sixth Ave. and saw glass all over the sidewalk. The Mobile

Guru Verizon store, a minority-owned business, had had its windows smashed, had been totally looted, and had been all boarded up. It had been shut since mid-March, and now was clearly destroyed.

Clearly, after dark, someone under cover of the “protests” had thrown a wire garbage can through the window and had stolen what was in the store. My blood boiled. It was hijacking our movement. It was an attack on a neighbor. And it only provided validation to those, like Trump, looking to be the defenders of Law and Order.

My mind rolled about what I would have done if I had been there. And I know that I would have gotten in their way. Looters are just punks looking to profit off the true anger so many feel. They have no place in our movement.

Schwartz is the male Democratic district leader for the 66th Assembly District, Part A, which includes Greenwich Village.