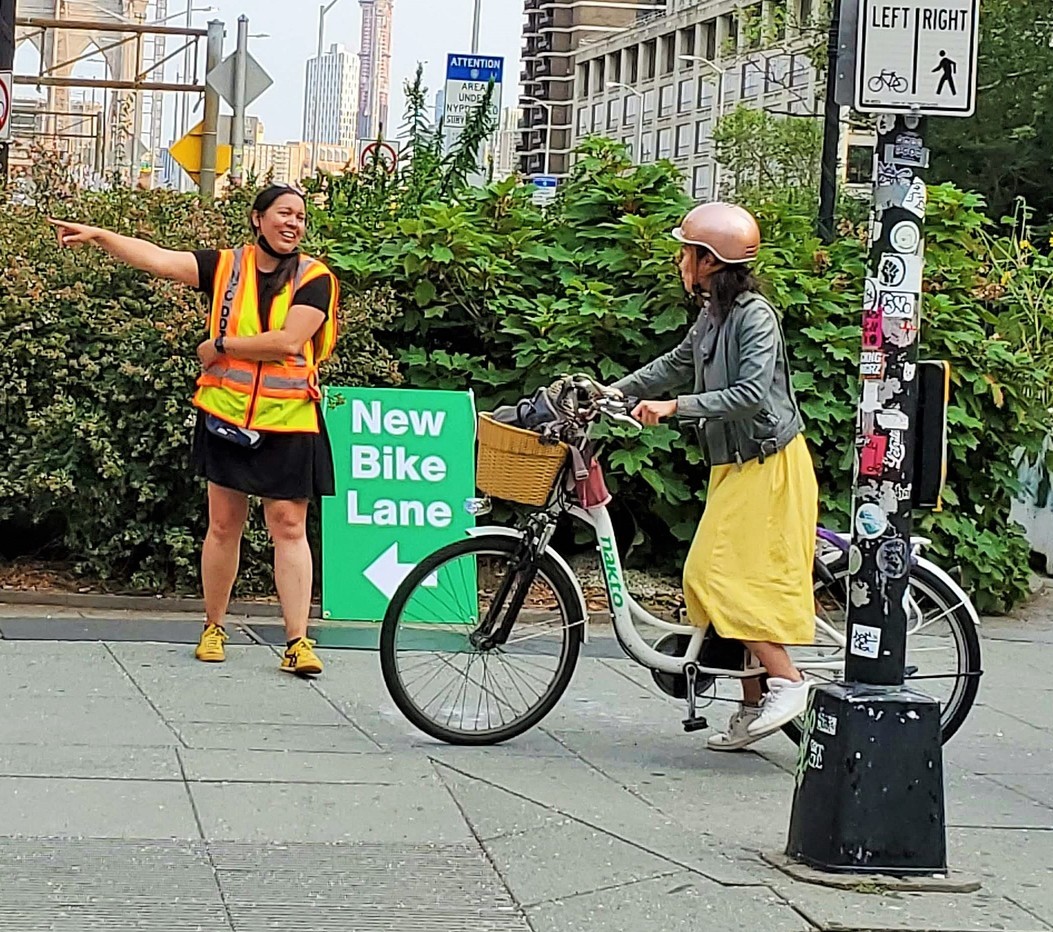 A Department of Transportation worker, left, helpfully pointed the way for a cyclist at the Manhattan entrance to the Brooklyn Bridge. (Photo by The Village Sun)

BY THE VILLAGE SUN | On Tuesday the city opened a new, protected two-way bike lane on the Brooklyn Bridge, making it a lot easier for cyclists to travel across the historic span.

But for a couple of Department of Transportation workers, things suddenly got a lot busier.

With the change, a lane of the bridge’s Manhattan-bound roadway has now been dedicated to bikes, while pedestrians have been given the run of the central boardwalk.

Tuesday afternoon, a woman wearing a bright-yellow-and-orange safety vest could be seen rushing about and gesticulating at the foot of the bridge’s Manhattan side, trying to keep cyclists and pedestrians separated.

Basically, D.O.T. is now trying to ensure that pedestrians wanting to go to Brooklyn stay to the right while cyclists veer to the left as they enter the bridge on the Manhattan side. Other pedestrians also might be heading left to cross Centre Street or get to the City Hall subway station.

“It’s a huge mixing area,” the woman acknowledged, declining to give her name.

There was a sign prominently posted saying, “NEW BIKE LANE,” with an arrow pointing left, but it apparently wasn’t registering with everyone.

Asked if the city would paint some pavement markings on the bridge entrance plaza to help cyclists and pedestrians know which way to go, the D.O.T. worker said, the agency is currently “assessing” the situation and will see how things go.

Would D.O.T. station a person there permanently? Again, she said, “Assessing.”

Another issue is the crosswalk on Centre Street, where more than a few pedestrians are treading across faded “sharrows” that they likely have no clue are part of a bike lane. If the D.O.T. worker was telling pedestrians not to walk on the “sharrows” (as she did The Village Sun), meaning cyclists aren’t “sharing” it anymore, shouldn’t this part of the crosswalk then be made into a painted-green bike lane? Maybe this is coming.

At any rate, cyclists definitely appeared to be loving the new layout.

“Yay, bike lane!” one helmet-wearing rider cheered as he pedaled across Centre Street toward the pristine path.

Raising some eyebrows, Mayor de Blasio had been scheduled to attend Tuesday’s press conference announcing the new bike lane’s opening but failed to show up.

In addition, a new protected bike lane — walled off for a block or two from car traffic by concrete Jersey barriers — has been installed along Centre Street connecting to the bridge. However, the preexisting path still peters out by the courts at Worth Street, not picking up again until about 10 blocks later in Nolita at Spring Street. So there’s still a big gap without any bike lane at all along this route.