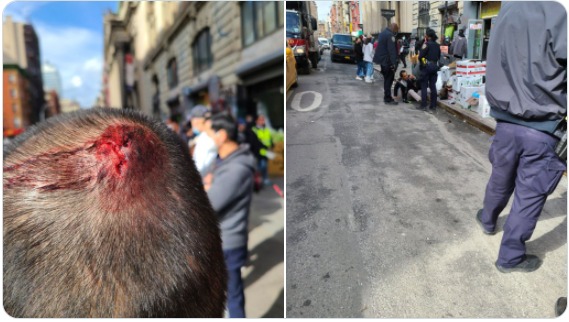 A bystander posted photos of the aftermath of the fight on Grand Street. (Photo by JWONG / Twitter)

Men hurt in fight on Grand St. but neither presses charges

BY THE VILLAGE SUN | Two guys got into a bloody scrap at Grand Street and the Bowery on Thursday and both came away the worse for it.

A Twitter post by a witness brought the incident to light. The tweet noted the fight was right outside where a homeless drop-in center is being proposed.

According to police, just before noon on Feb. 17, a 35-year-old man went up to a 25-year-old man and asked for a cigarette. Somehow, a fight then broke out between the two and both of them wound up getting injured.

The younger man suffered a nasty-looking laceration to the back of his head while the other guy hurt his knee.

Someone called 911 and police responded to the scene. However, the 25-year-old told cops he didn’t know how he got hurt. He was taken to New York-Lower Manhattan Presbyterian Hospital for treatment, where he was reported in stable condition.

The other man told the cops he fell and hurt himself. He refused medical attention.

It wasn’t immediately clear, at least not from a police spokesperson, if the men were homeless or where they were living since neither wanted to file charges against the other, so police did not take down their information.

A police source said, “It just looks like two dudes who may or may not have been fighting each other, and they didn’t want to get involved with the police.”

The Twitter poster noted that the scuffle’s location was right outside 231 Grand St., where a new homeless drop-in center is proposed. The Village Sun recently reported on Paul’s Place, a similar type of drop-in center and so-called Safe Haven — featuring 70 lounge chairs available for overnight stays, plus 24 longer-term “stabilization” beds — that will be opening on W. 14th Street as soon as next month.

Nearby Sara D. Roosevelt Park and the surrounding blocks have been a magnet for drugs and violence and homeless individuals, so the Chinatown-area drop-in shelter and its supportive help could provide a valuable service.

The dust-up’s location was also just a block and a half away from where Christina Yuna Lee, 35, was brutally slain in her apartment by a push-in attacker a week ago. News reports described the alleged killer as homeless, saying he was staying nearby at the Bowery Mission at the time of the crime.

The poster, JWONG, stated that one of the men in the scuffle was arrested, which was not accurate, according to police. She tweeted that, “according to local press,” one of the two was “a homeless individual roaming the area in the past several months and is emotionally disturbed.” That could not be confirmed by The Village Sun. She also said the guy who fell and hurt his knee was an “old man,” but 35 is not even considered middle-aged.