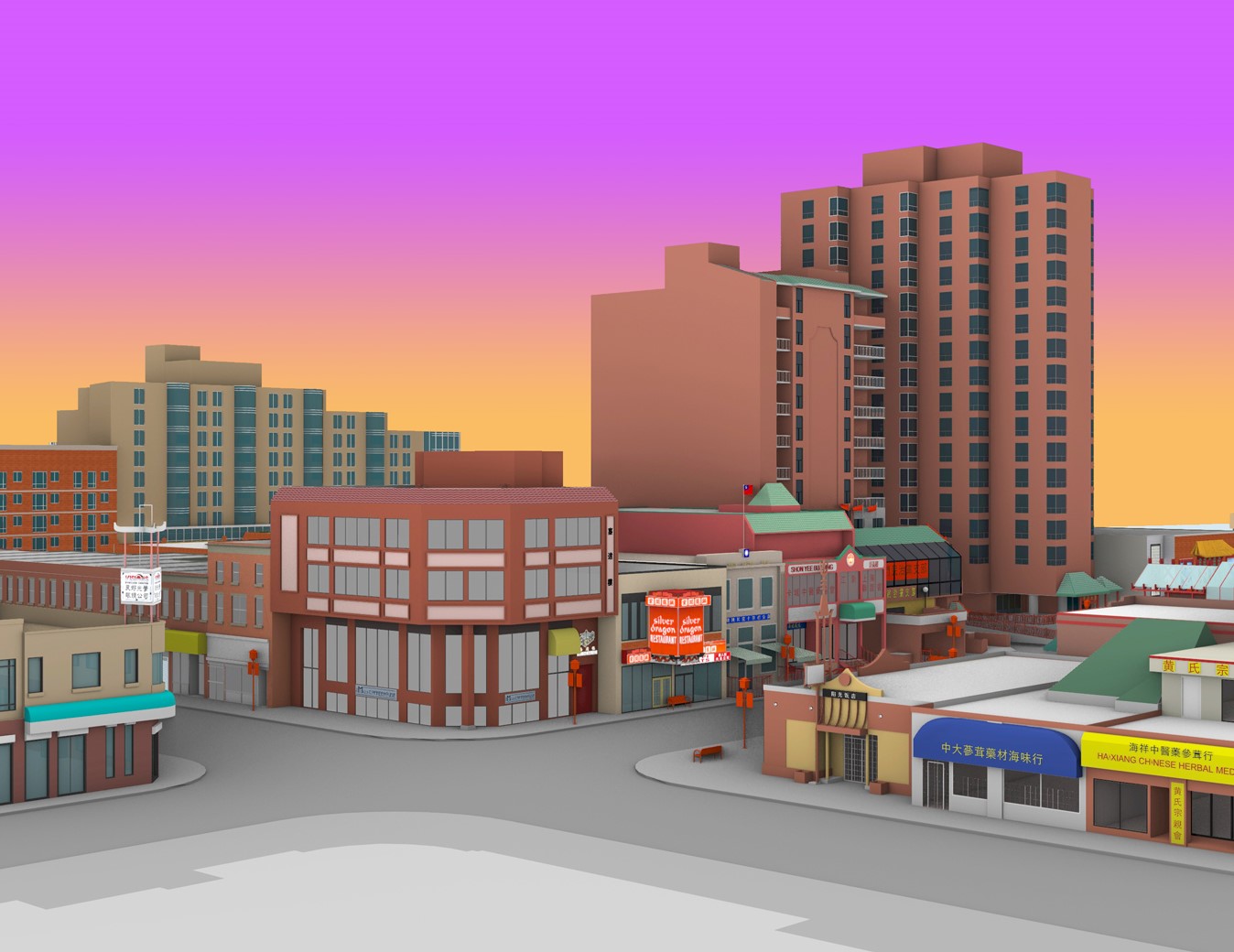 A digitally mapped section of the Chinatown in Calgary, Canada, done by Cheryl Wing-Zi Wong. (Courtesy the artist)

Over the next eight months, Wong will be creating 3D architectural models of Chinatown’s core — starting with Mott, Pell, Bayard and Doyers Streets — documenting the stories of longtime residents and small businesses alongside the spaces they occupy.

“History is often quite subjective and a lot of oral histories aren’t really memorialized in a place,” she told The Village Sun. “So this hopes to create a place where this can all be archived.”

At the “intersection of art and architecture,” her undertaking is part of a residency with the Brooklyn-based Laundromat Project, with additional support from the Columbia University Graduate School of Architecture.

It’s the second project in a series titled “Reflective Urbanisms” that Wong began two years ago by mapping the Chinatown of Calgary, Canada, during an artist residency with that city. While one might not think Calgary’s and Manhattan’s Chinatowns have a lot in common, Wong believes they share a broader history.

“One of the most common threads for almost any Chinatown is that it’s a place founded on exclusion, founded on racism,” she said. “These are ethnic enclaves because nobody else wanted Chinese people to live in their area.”

Wong believes that taking a closer look at the physical structures making up these neighborhoods reveals this history of exclusion, as well as how “most of them have become flourishing communities.”

Unlike Downtown Manhattan’s Chinatown, which has remained relatively intact for more than a century, resisting encroaching development and displacement pressures, Calgary’s Chinatown was displaced three times by public policies that some call racist.

In its current location, bordering Calgary’s central business district, the neighborhood was further marginalized by the construction of a federal office complex, the Harry Hayes Building, in the ’70s, which, according to Wong’s research, displaced more than 30 homes and 200 residents. Despite occupying space within the relatively small neighborhood, the building’s main entrance faces away from it — an architectural decision representing to this day a “source of contention” in the community, according to Wong.

In Manhattan’s Chinatown and the Lower East Side — two neighborhoods with fluid and at times interchangeable boundaries — neighborhood activists are currently fighting against the development of four supertall towers that they charge will lead to mass displacement. The community is also pushing for the passage of the Chinatown Working Group plan, which would place height caps on new development and preserve affordable working-class housing.

Wong’s project is all about reflecting, she said, “to take in these histories, knowing that these places are changing these days even at a faster pace than before…speculating on what the future is and making sure that we make space and take space to reflect on the past, and on our current-day situation.”

Making use of fire insurance maps dating back to the 1800s, which not only show the neighborhood’s street grid, but also the layout of the buildings’ interiors, Wong will trace how Manhattan’s Chinatown has evolved.

There are notable exceptions, such as Confuscious Plaza, which was fiercely opposed at the time of its construction during the 1970s for not hiring Chinese workers.

Her project feels more urgent now than ever, Wong said, given the rise in anti-Asian hate that has hit Chinatowns across the country since the start of the pandemic. Her work also draws inspiration from an online publication she edited last year, called “Musings From Chinatown: Peri-Pandemic Notes on Resilience.” The publication tells stories of community efforts to support Asian businesses and residents, plus “foster solidarity, speak up and create safety.”

Wong will be hitting the streets of Chinatown this spring and summer, inviting passersby to tell their own stories. She’s designed a set of benches that, as she described it, “invite people to interact in new ways.” In partnership with the Chinatown Business Improvement District, this seating will be placed in public spaces throughout the community.

The public engagement will be “super-open and casual,” she said: “Drop by, say hi. Drop by, don’t say hi.”

Wong aims to complete her mapping and historical archive of Chinatown by November, She hopes that it will serve as an inspiration to community members to continue telling and preserving their stories.