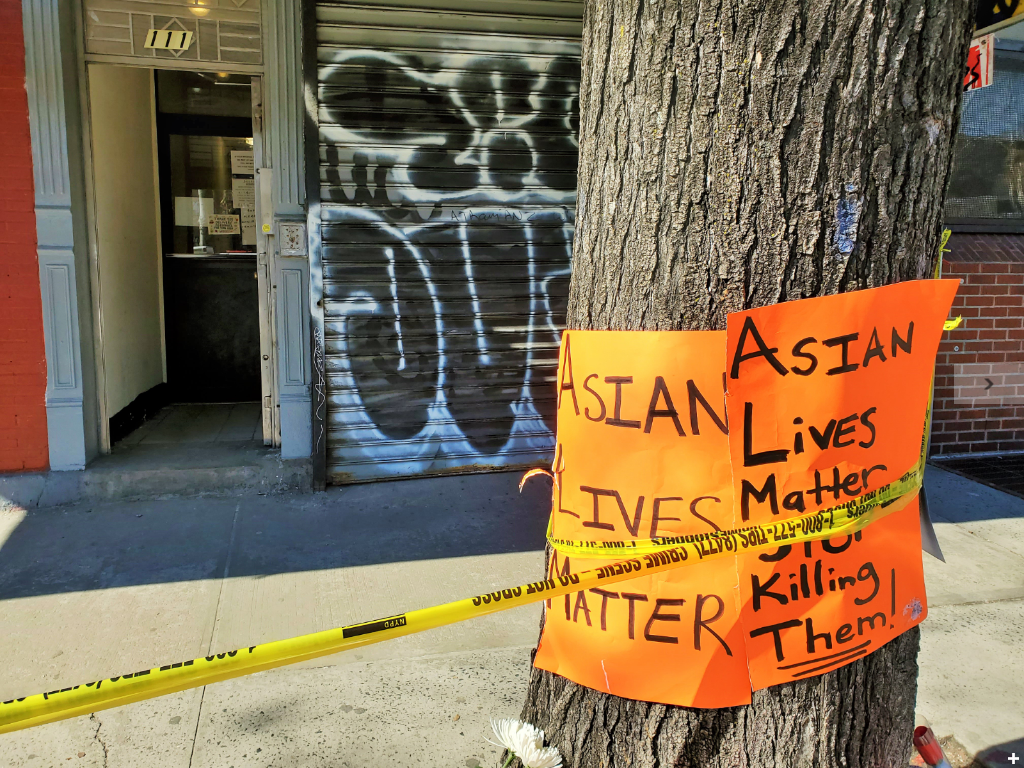 The Chrystie Street building where Christina Yuna Lee, 35, was killed on early Sunday morning was still a police crime scene on Tuesday. Members of Harlem Community Watch left the orange signs on the tree. (Photo by The Village Sun)

BY LINCOLN ANDERSON | Outrage and frustration within the Asian community boiled over at a rally Tuesday just steps from where Christina Yuna Lee, 35, was savagely murdered in her apartment over the weekend.

“How many more have to be punched in the face, slashed in the face, pushed in front of trains?” Terrance Park, a Korean community leader from Flushing, railed at the rally in Sara D. Roosevelt Park. “I don’t care whether the perpetrator is mentally ill or not.”

Park’s voice and expression were filled with sheer fury as he then led the crowd in a series of chants.

“We want to be safe!” he shouted into the microphone. “We want protection!… We want safety!… We want it now!… We need justice now!… Stop Asian killing!”

The press conference was held by the city’s Korean community. The tragic victim, Lee, was of Koren descent. From New Jersey, she had lived on Chrystie Street between Grand and Broome Streets for the past year. A graduate of Rutgers University, she was a digital producer.

Her alleged murderer, Assamad Nash, 25, also from New Jersey, was reportedly living at the Bowery Mission, just 5 blocks away. According to police, Nash slipped into the building right behind Lee early Sunday morning around 4:30 a.m. after she had been dropped off by an Uber following a night out. Nash trailed Lee up six flights of stairs, then forced his way into her apartment. Police said he stabbed her 40 times.

Lee was found in her bathtub with her top off, lying in her own blood. Nash was reportedly found hiding under the bed. He has been charged with murder, as well as sexually motivated burglary.

Nash, who has a criminal record, reportedly spent his days earning money by swiping people into the subway with a MetroCard, and was said by other homeless men in the area to smoke K2 cigarettes. So-called synthetic marijuana, K2 is known to have unpredictable and erratic effects on users. According to one news report, Nash was a familiar sight hanging around the troubled park for the past two or three years.

In October, a 51-year-old immigrant Grubhub bicycle deliveryman was stabbed to death in S.D.R. Park.

“I can’t believe we’re standing here again,” Sandra Ung, a Queens city councilmember, said incredulously at Tuesday’s rally. “Like, how much more do we have to do this? … Let the prosecutors look at all potential motives for this crime, and let justice be served.”

Other speakers included Councilmembers Julie Won and Linda Lee, also both from Queens; Sharon Lee, who served a brief stint as the interim Queens borough president; and Comptroller Brad Lander.

Also represented at Tuesday’s event were Al Sharpton’s National Action Network, as well as the groups 100 Suits and Community Capacity Development. Speakers, both Asian and Black, stressed that now is the time to be united not divided.

After the speeches, everyone then walked across the street to Lee’s building, which on Tuesday was still a taped-off crime scene. They took turns adding single white flowers to a memorial to her around the base of a sidewalk tree.

The two co-presidents of the group Harlem Community Watch were on hand to lend support — and also to condemn the alleged killer.

One of them, Calvin Hunt, angrily said of Nash, “He don’t know what’s goin’ on. He’s gettin’ high too much.”

He had much angrier words for him, too, basically saying he was not fit to be called a Black man.

Hunt said he and his partner, Richard Kirkpatrick, are ready to “start patrolling the building.”

Chan complained about the area’s sketchy conditions, saying police don’t do much about it.

“There are guys who sleep on the corner at the fruit stand, on top of where they keep the oranges,” he said, referring to the market down the block. “There are the guys hanging out in the park — there were three stabbings there…drugs. It’s just an atmosphere conducive to chaos and violence.”

Chan said, in his view, it’s time to start talking about getting violent mentally ill people off the streets.

“The city and state started walking away from institutionalized care 25 or 30 years ago,” he said. (Actually, it was more like 40 years ago.) “Right now, we need to start talking about that again. I’ve been to 30 frickin’ rallies like this in the last year, and all we hear is ‘supportive housing.’ Supportive housing — yes, if you lost your job, if you have a substance abuse issue. O.K., supportive housing may work there. But severe mental illness where the person is violent — you need to keep the person there [in an inpatient facility] to get treated. We need to protect people from themselves and also the general public.”

Councilmember Erik Bottcher, in his eight-point plan to address the mental health crisis, has called for a return of hundreds of behavorial-health inpatient beds that were lost just since 2000.

Glen Lee, a Queens resident originally from Chinatown who works in film, feels anti-Asian hate was at least partly to blame for Lee’s death. He said the current ongoing wave of violence against Asian Amercians traces its roots back to the Chinese Exclusion Act under President Grover Cleveland back in 1882 — and, even before that, back to the Opium Wars, waged by the British against China. In other words, it isn’t all just because of Donald Trump.