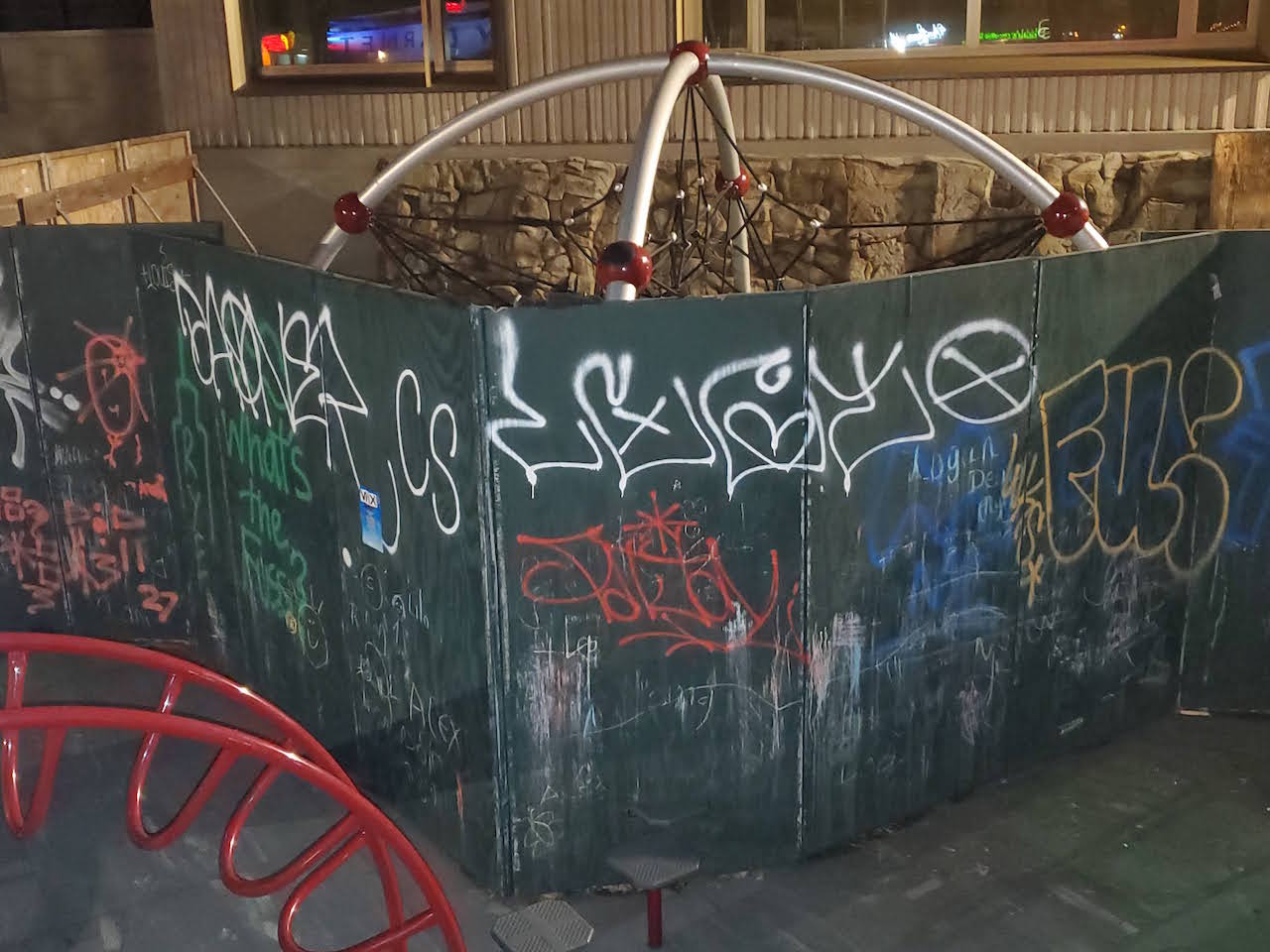 It is time for a playground revolution: Free the play equipment. (Photo by The Village Sun)

BY LINCOLN ANDERSON | Lenny Kravitz sang, “Are you gonna go my way?” But local parents in Little Italy have been staring at a construction wall in DeSalvio Playground for the last few years and wondering, “When is it gonna go away?”

Just like you can’t get an infectious Lenny Kravitz song hook out of your mind, the wall was stuck in parents’ field of vision.

To the delight of parents and kids, DeSalvio Playground, at Spring and Mulberry Sts., was recently renovated. But the construction of a new seven-story luxury condo building next door at 75 Kenmare St. has meant that part of the park has been off limits due to scaffolding, netting and a construction fence.

The ritzy building was developed on a former parking garage site by DHA Capital, with the interiors of the 38 condominium apartments created by the rock icon’s Kravitz Design firm. Sale prices have ranged from nearly $2 million for a one-bedroom to $7.5 million for a two-bedroom penthouse.

Interesting fact: According to City Realty, because the new structure is in the Chinatown-Little Italy National Historic District, more than 50 of its exterior had to be composed of masonry.

Some call the area Nolita while others scoff that there is only one name for it, Little Italy, fugheddaboutit.

But there’s no debate that parents have been fuming that a new rope jungle gym and climbing wall in the playground’s southwest corner have remained off limits to their kids — even though 75 Kenmare St. was completed about a year ago.

As of Friday, a green construction fence, heavily graffitied, was still cordoning off the jungle gym area while plywood was covering part of a new climbing wall.

Local mom Samira Panah Bakhtiar, who has one a 3-year-old and another child on the way, said she had been demanding answers and action in vain for the past year, contacting 311, DHA Capital and the Parks Department, trying to ensure that the playground’s conditions were safe and also liberate the part of it that has been held hostage. She was particularly concerned that a gap had opened up on one side of the construction fence, which she feared could allow a tot to slip through and get into trouble in the unfinished area.

“Neither Parks and Rec nor the developers have responded,” she said, speaking on Thursday. “It’s been clear that, in the last two years, Lenny Kravitz’s beautiful new Nolita condo created a real estate opportunity for millionaires in the area, but created a huge issue for our children in the local neighborhood. I’ve attended community board meetings and filed multiple complaints with 311 and there has been no response.

“Spring is here, and our kids need a safe place to play,” Bakhtiar stressed. “DeSalvio has been littered with graffiti, which I believe has been exacerbated by this dangerous scaffolding. A child can slide through the scaffolding and get caught between the building. It’s really scary and an accident waiting to happen.”

By “scaffolding,” she meant the construction fence.

However, on Friday, a Parks Department spokesperson told The Village Sun that the fencing was, in fact, finally coming down.

“We are removing the fencing this weekend to provide more play space,” the spokesperson said. “The plywood [on the climbing wall] will remain in place until an awning is installed on the building.”

An awning is reportedly needed to prevent parkgoers from “accessing a window ledge” of 75 Morton St. via the climbing wall.

As for why the corner of DeSalvio Playground had been closed for so long, it was reportedly because the building owner needed to install “additional safety measures.”

Yet would the captive jungle gym really finally be freed?

After all, as Lenny Kravitz sang, “It ain’t over till it’s over.”

But, yes, Saturday afternoon, Bakhtiar happily reported that she and her family had just gotten back from the park, where they had seen workers taking down the hated fence. She sent The Village Sun a video of the freed jungle gym.

“Construction workers were removing the scaffolding from the rope-climbing jungle gym and moved it back to just now cover the rock-climbing wall,” she said. “While there is still a tremendous amount of graffiti and the park itself needs to be cleaned to remove the filth from two years of scaffolding, it is progress, in that it’s opened up another 500 to 600 square feet of play space for the kids.”

So, just as Lenny Kravitz sang, “Believe in Me,” Parks was true to its word.