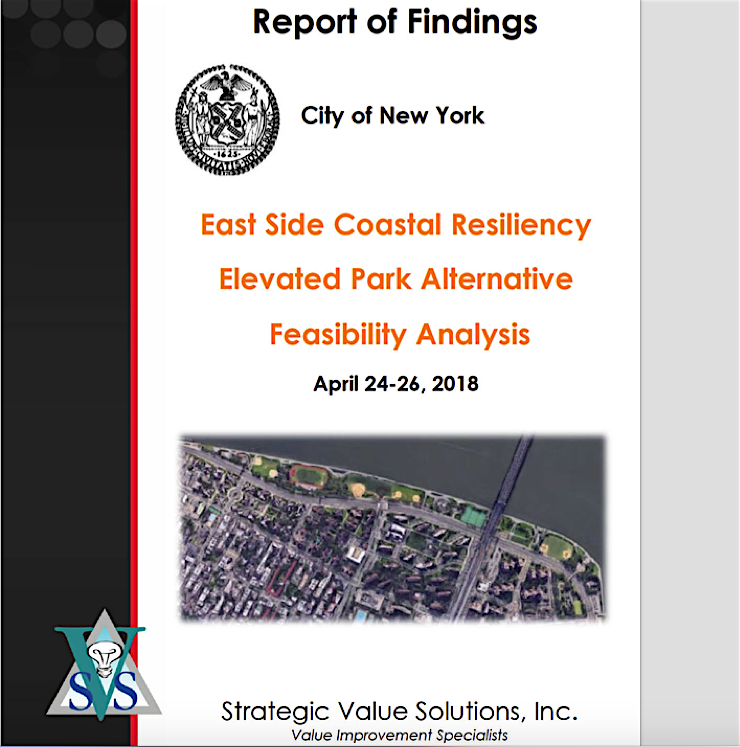 Until recently, the city denied this three-year-old report on East River Park existed. When the city finally did release it, it was heavily redacted.

East River Park ACTION, the Grand Street Democrats club and a lineup of political candidates and local activists are plaintiffs in an Article 78 lawsuit against Mayor de Blasio, demanding that the redacted sections of the Value Engineering Study for the East Side Coastal Resiliency project be made public.

The lawsuit, which also names the city’s Office of Management and Budget as a plaintiff, was filed Fri., April 2, by attorney Jack Lester.

The study in question, called “East Side Coastal Resiliency Elevated Park Alternative Feasibility Analysis,” allegedly contains — somewhere in its massive redactions — the “rationale” for why the city scrapped a previous, simpler resiliency plan. The simpler plan would have created levee-like berms on the east side of the F.D.R. Drive without raising the height of the entire park.

The current, more costly $1.45 billion project would bury the entire 2.4-mile-long East River Park under 8 feet to 10 feet of new infill dirt, and close the park in phases for construction, lasting at least five years.

Per the lawsuit: “The selected policy alternative, as a result of recommendations set forth in the Value Engineering Study, was contrary to the selected alternative that the City represented to the public would be chosen. Critically, this alternative, concealed from public review, would have a devastating impact upon the East River Park.”

The overall E.S.C.R. scheme includes East River Park, which runs from Montgomery St. to E. 12th St., plus the waterfront up to E. 25th St.

In February, another plaintiff on the suit, the Grand Street Democrats snubbed Rivera, opting not to endorse her for reelection due to her support for the E.S.C.R. plan and alleged failure to heed the community’s concerns about it.

The suit charges, “Information supporting New York City’s decision to expend more than $1 billion on a project to ameliorate and mitigate climate change and flood hazards in Lower Manhattan is contained within a document that is being substantially concealed from the public.”

This concealment was “arbitrary and capricious” and “violated the public’s right to know” under the Freedom of Information Law, or FOIL, the lawsuit says.

“The policy alternative selected by the City of New York, was based upon a decision-making process and factual underpinning that was cloaked in a veil of secrecy,” the lawsuit charges.

The city, for its part, argues the redactions were done to protect “trade secrets” and “personal privacy,” among other things, or involved “deliberative material,” including discussions between and within city agencies.

In January, East River Park ACTION members filed a FOIL request to obtain the Value Engineering Study. But what the city released the next month was so heavily redacted that it was “contrary to law,” the suit adds.

As a result, the New York Sierra Club demanded that the City Council hold an emergency hearing on the coastal resiliency plan, but that didn’t happen.

Attorney Lester subsequently requested to have the redactions removed, but the city only lifted some.

Meanwhile, the study, which was prepared by a private consultant, Strategic Value Solutions, was actually published in April 2018 — though the city until recently claimed there never was one.

“Remarkably, the City at first, denied the very existence of a published report,” the suit says. “After an alleged search of City records, the report was located. However, when the report was released, it was so redacted as to be incomprehensible.”

The 47-acre park is used regularly by low-and middle-income residents of the East Village and Lower East Side, the suit notes. It adds that, after the 9/11 attack in 2001, “millions of dollars were allocated to repair the East River Park. The most recent upgrades to the park include handicapped accessibility for the Fireboat House and renovations to four of the park’s ball fields and its running track. The seawall was recently renovated for the first time since its completion in the 1930s.”

In addition to putting the park off limits in phases, the E.S.C.R. project would create hazardous environmental conditions, the opponents argue.

“The alternative selected includes a full reconstruction and reconfiguration of the East River Park’s underground sewer and water infrastructure,” the suit states. “Hazardous materials would disturb subsurface natural resources. Contaminants could be disturbed during excavation. Noise and vibration would generate toxic emissions impacting on public open space and the health of the community residents. The loss of open space would severely impact upon the Lower East Side community and will be disproportionately felt by lower-income residents, people of color, and people residing in public housing. Twenty percent of all residents in the impacted community are living in poverty.”

Not only is the Value Engineering Study still largely hidden from view, so was the process that led to the current E.S.C.R. plan. The community was very involved with the earlier, berms plan. From 2015 until fall 2018, the city regularly engaged and consulted the community about the coastal resiliency project — before suddenly switching to the E.S.C.R. plan.

The suit notes, “Members of the community, particularly representatives of the local community boards and the Borough President’s Office, were never advised of the fact that while they were being consulted, the real decision-making was taking place in consultation with private contractors hired to perform a Value Engineering Study.

“This process of concealment and cover-up has frayed trust in government and public agencies because of the drastic change in plan design done without community consultation,” the plaintiffs charge.

The opponents also voice concern in the lawsuit that private contractors that were hired to compile the comparative study might have a financial interest in or “connection” to the project in some way — yet there’s no way for the public to know that due to the redactions.

“Advocates both in favor of and against the East Side Coastal Resiliency project are rightfully eager to see the outcome of the study,” Brannan wrote. “This is a significant project that will fundamentally change the area and require hundreds of millions of dollars of investment from the city. As an advocate for climate adaptation and resiliency, and as someone who has not taken a position on this project, I too wish to see that the initiative will live up to its resiliency goals, and that the city’s investment is worthwhile from a sustainability standpoint.

“As you know a heavily redacted, virtually unreadable copy was released due to FOIL requests,” Brannan wrote. “This does not necessarily inspire confidence for those who are merely seeking transparency and information. If your office does indeed have confidence in the project, I would encourage you to release the unredacted report immediately.”

Like East River Park ACTION, state Senator Brad Hoylman FOIL’ed the city’s Department of Design and Construction to get a copy of the unredacted V.E.S. But his request also was denied, on Jan. 29, and he was directed to the redacted report, on the city’s Web site for the E.S.C.R. project. On March 23, Hoylman wrote an appeal to Lorraine Grillo, the D.D.C. commissioner, again requesting the full unredacted report.

“I sought this report to understand why the findings of the 2018 Value Engineering Study led to so dramatic a change in the project design,” Hoylman wrote. “[The] report [posted on the city’s Web site] is heavily redacted and appears to obscure entire pages discussing the advantages and disadvantages of alternative design concepts for the E.S.C.R. project. This lack of transparency denies access to discourse and reasoning surrounding the 2018 design change.”

Borough President Gale Brewer wrote to Mayor de Blasio on March 17, expressing her concern over the redactions in the comparative study.

“I am requesting that the previously released materials containing redactions be reviewed and where appropriate, unredacted,” Brewer wrote, “and that any forthcoming material to be shared be made more transparent to the public. I do not understand why so much of this important information needs to be kept from public viewing.”

In addition, Village District Leader Arthur Schwartz, who is running for City Council District 3, told The Village Sun he still plans to file an appeal on his “alienation” lawsuit on East River Park. The suit argues that the state Legislature must vote to “alienate” the park to allow the resiliency project since the major construction project would remove the park from public use for a significant amount of time.