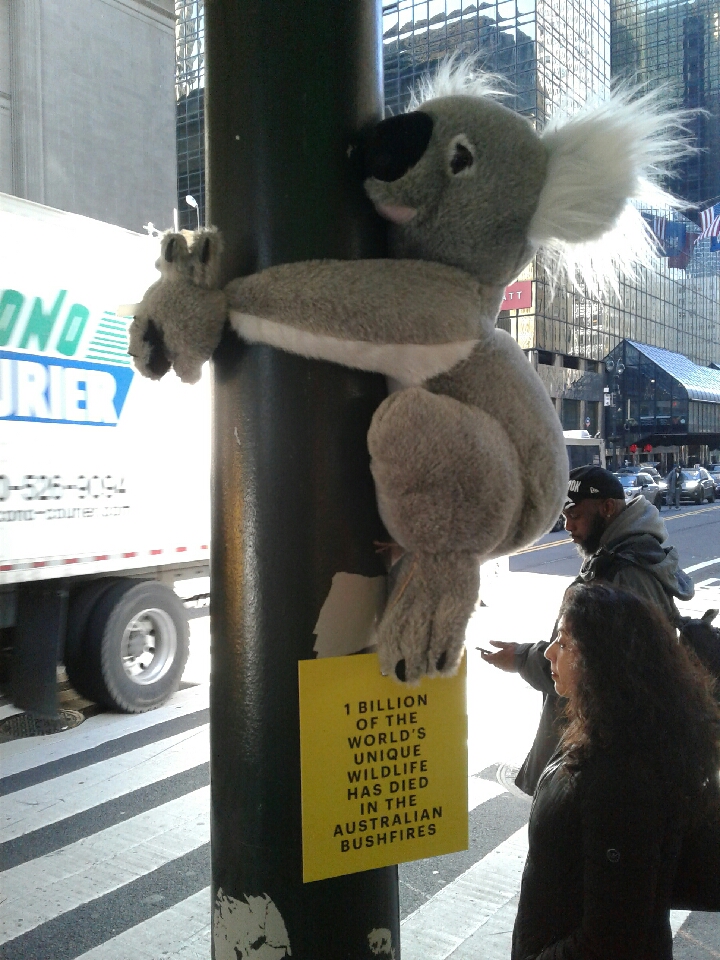 Cuddly Koalas were found clinging to lampposts and signs all over New York City on Friday to call attention to the wildfires ravaging Australia.

The gray bears bore tags saying, “1 billion of the world’s unique wildlife has died in the Australian bushfires.”

The New York Post reported that the koala campaign came from Australian ad agency Cummins&Partners, according to AdWeek.

The agency has set up a GoFundMe page, donations from which will go to the New South Wales Wildlife Information Rescue and Education Service, Australia’s largest wildlife rescue charity.

The wildfires Down Under are being fueled by drought, but also bizarrely by pyromaniac arsonists who apparently get a kick out of seeing the conflagrations.

Meanwhile, as Greta Thunberg and others point to climate change as the real culprit, others say that Oz should start practicing “controlled burns,” which are used in California, plus learn from the ancient techniques of Aboriginal Australians. The continent’s native inhabitants have long practiced fire management by using smaller burns, plus making sure to clear away dry and downed brush that could fuel larger, out-of-control fires.

Some even charge that overzealous green activists are responsible for the disaster by blocking the removal of ground fuel on environmental grounds.

But without a new approach, the wildfires will only worsen in the future due to climate change, experts say.