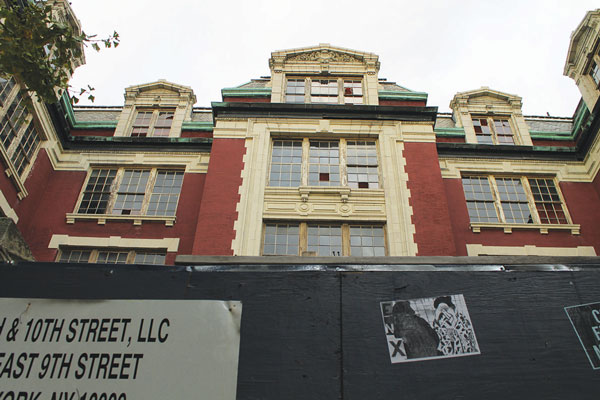 BY LINCOLN ANDERSON | Gregg Singer, the embattled owner of the old P.S. 64, may have recently bought a bit more time in his efforts to stave off foreclosure of the coveted East Village building.

But to hear his spokesperson tell it, the developer’s repeated failures to realize any of his plans for the vacant structure are taking a toll on him — to the point that he has even been shunned by his own relatives who lent him money to buy the place.

It’s been more than 20 years now since Singer purchased the historic property at a city auction for $3.2 million. Activists back then disrupted the proceedings by releasing a swarm of live (well, half-alive) crickets — but that was just the start of his troubles.

Over the ensuing two decades, Singer’s schemes to redevelop the former school — either by razing it for a new high-rise tower or renovating the existing building — have all been quashed by the city, one way or another.

Community activists and local politicians support reclaiming the building as a community center, and City Hall — since former Mayor Mike Bloomberg’s tenure — has supported them. When Singer purchased the place it was occupied by CHARAS/El Bohio, a Puerto Rican-run cultural and community center that had been there for 20 years, which he soon evicted.

Last year Madison Realty Capital started foreclosure proceedings against Singer and his partners for not paying back a past-due $44 million loan on the property, at 605 E. Ninth St., just east of Avenue B.

Meanwhile, in September, in a last-ditch effort, Singer filed an Article 78 lawsuit against the city and the Department of Buildings, asking for the court to order the de Blasio administration to give Singer a building permit, so he can finally renovate the building into a student dormitory. The developer hopes this would give his lenders confidence in him, and thus hopefully allow him to avoid foreclosure.

A stop-work order has been in effect on the property since 2015, preventing any work from going forward.

In a new twist, Singer’s team discovered that the State Supreme Court judge on his separate foreclosure case, Andrea Masley, received campaign contributions from Aaron Sosnick, a wealthy hedge-funder and East Village activist who Singer charges is trying — with the city’s help — to force a sale of the building to him. On Sept. 9, Singer’s attorneys filed a request for Masley to recuse herself from the case. On Dec. 13, she did, and the case will now be referred to one of the other eight judges in the Commercial Division.

The contributions to Masley’s campaign were made years ago — back during her first run for judge in 2006. Also contributing funds to her then were Sosnick allies and associates Michael Rosen, John Singer and Andrew Waldman.

Speaking to The Village Sun, Nicole Epstein, Singer’s spokesperson, said of Masley’s recusal, “We’re glad. It kind of restores some faith in the system — that it works sometimes.”

Of her client, Singer, she said, “He’s just trying to renovate the building.”

Meanwhile, Epstein said that Mayor de Blasio — in his statements at a Lower East Side town hall two years ago and also to this reporter at a media roundtable a year later — has scared off potential buyers for the old school.

At the town hall, in October 2017, de Blasio announced the city was “interested in reacquiring” the building. He further said former Mayor Giuliani’s having put the old P.S. 64 into the hands of a private developer was a “failed mistake.”

Then, at a media roundtable in August 2018, this reporter asked the mayor what progress the city had made since the town hall in reacquiring the old P.S. 64.

De Blasio responded that Singer had been “exceedingly uncooperative.”

“We’ve tried to have a productive conversation about purchase,” he said. “We’ve gotten nowhere so far. We’re not giving up.

This reporter then also asked the mayor about the possibility of the city acquiring the building through eminent domain.

“[That’s] certainly something I want to know more about,” de Blasio offered, “but I had hoped the best solution here would be a direct purchase. That’s not off the table. It’s just we’re just not getting any cooperation so far.”

‘Nail in the coffin’

Epstein said de Blasio’s comments at the media roundtable were devastating to her client.

“That was the nail in Gregg’s coffin,” she declared. “Madison filed for foreclosure three weeks after the mayor made his statement to you. That was a message to Madison: You guys are waiting for an outstanding loan and he said Gregg was being uncooperative and ‘I’m using eminent domain to get [the building] back.’

“You can imagine,” she said, “here you are and you see in the press that the person you have a loan with is being ‘exceedingly uncooperative.’”

Meanwhile, she said, it’s the other way around: Singer’s efforts to work with the de Blasio administration on the building’s redevelopment have been met with “radio silence.”

Epstein noted that Madison made its $44 million loan to Singer in 2016, right when Adelphi University had committed to paying Singer a minimum of $375,000 per year for 10 years for two floors in the E. Ninth St. building.

She said Sosnick, coincidentally also at that time, retained HR&A Advisors to lobby specifically against the building’s use as a dorm.

Singer’s side charges that the city subsequently “slow-walked” the Adelphi approval process, causing the university to bail on the plan.

‘Driving down the price’

According to Epstein, the old P.S. 64 has been privately appraised at $200 million, but the mayor’s comments have impacted that, too.

That is driving down the sale price for the eventual buyer, down to around $40 million or $50 million, according to her.

She noted that Paul Wolf, a trustee in Sosnick’s foundation, is on record reaching out to Madison about buying the old school. The Sept. 9 court filing asking Justice Masley to recuse herself from the foreclosure case notes:

Michael Stoler suggested that I reach out to you about this property directly. My firm, which represents nonprofit organizations, has been trying to get old PS 64 into nonprofit ownership for quite some time – Gregg may have mentioned me. If and when there is an opportunity to purchase this building, I have very interested buyers. If there is the opportunity to acquire the property before it goes to market, I would appreciate the chance to discuss what that would entail. We can move very quickly.

I look forward to talking when it is appropriate.

According to Epstein, Madison forwarded the e-mail to Singer, asking, “Who is this guy?”

Proving that everyone is avoiding the old P.S. 64 like a hot potato, Epstein noted that the owner has had it up for sale during the past year, though without any listed price.

Again, she attributed the lack of interest to “the mayor’s two public statements — and getting Adelphi out of the picture.”

The spokesperson painted Singer as the victim in this never-ending saga that has left the once-stately building an eyesore and a blight on the community just east of Tompkins Square Park.

“You think Gregg wants to live like this?” she protested. “His family doesn’t talk to him. When he bought this building in 1999, he went to his uncle and family members. And now 20 years later, he’s losing family relationships over this.”

If people think the old P.S. 64 is just part of a big portfolio of properties that Singer owns, they’re wrong, Epstein noted.

“This is what he has,” she said. “This is it. He had to scramble to go to family members” to get money to buy the old school.

That might possibly explain why he has held onto the building so stubbornly in the face of staunch community and political opposition to his development plans for it.

Singer and Sosnick vied earlier this year over another building on the edge of Tompkins Square — the Boys’ Club of New York’s Harriman Clubhouse, at Avenue A and E. 10th St.

Epstein noted Singer pitched the city a deal in which he would buy the Boys’ Club building for the listed price of $32 million, then lease it to the city for 100 years “for pennies on the dollar” as a community center. In return, he hoped, he would finally be allowed to redevelop the old P.S. 64 as a dorm.

But, ultimately, it was Sosnick who wound up buying the Boys’ Club building. Some speculate he might also have been the “angel” who purchased St. Brigid’s Church, at Eighth St. and Avenue B, for $20 million in 2008, saving the beautiful, historic house of worship from demolition.

“We’re dealing with Sosnick, a really intelligent man,” she said. “He knows what he’s doing. He’s one of the most powerful, politically connected persons in the country. He’s pulling the strings of all the politicians for the last 20 years.”

She said if Singer loses the old P.S. 64 to foreclosure, he will sue for damages.

Sosnick did not respond to a request for comment for this article.