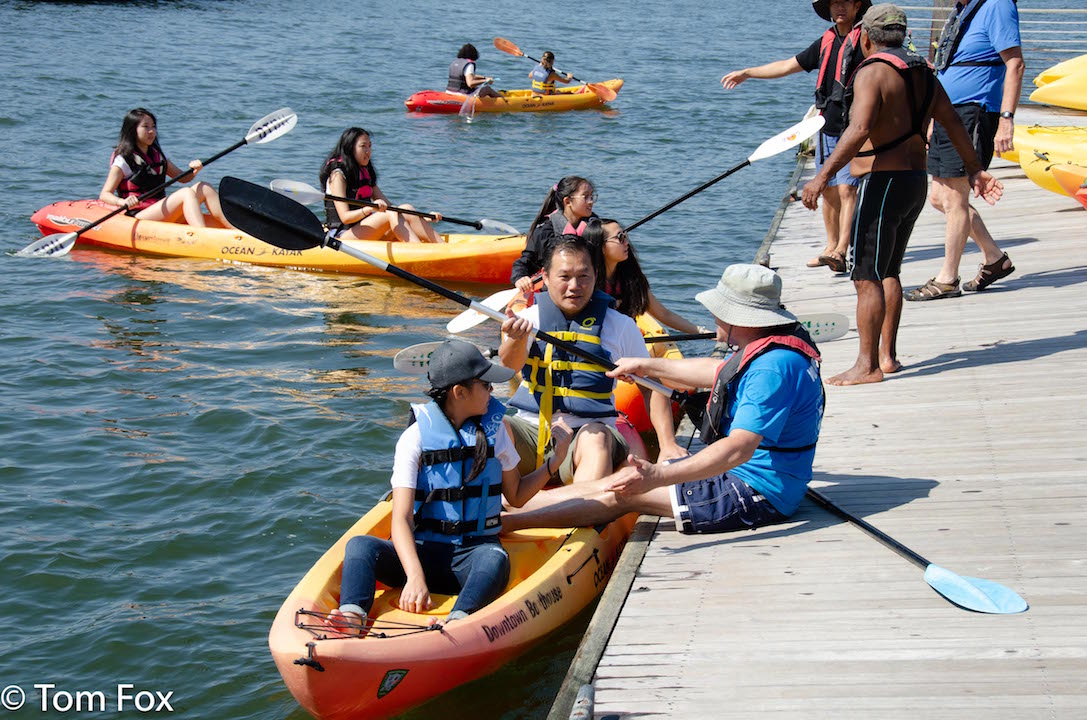 Parkgoers enjoying free kayaking in Hudson River Park last year thanks to the Downtown Boathouse. Because the park extends out to the pierhead line, most of the park is actually water. (Photo by Tom Fox)

BY TOM FOX | In 1998, more than 400 acres of the Hudson River shoreline were designated an estuarine sanctuary and included in the 550-acre Hudson River Park.

This in-water asset is roughly 75 percent of the entire park and provides a unique opportunity to expand and enhance public recreation, navigation, education, natural and historic preservation, and environmental restoration in Manhattan community boards that are the most underserved, in terms of parks and open space per capita, in the entire city.

Although the Hudson River Park Trust has had some success in supporting in-water activities, little has been done to address systemic problems. Nor has the Trust provided overall stewardship for this significant portion of the park, which has not received the same level of attention and/or investment as the upland sections of the park and real estate development projects.

After all, if you look at the water it seems to be doing just fine — but it’s not. Many waterfront advocates and Hudson River Park users believe the Trust is reticent to address a wide range of in-water issues because of the associated cost and the Trust’s lack of experienced marine and nautical staff. Think of “marine” as everything in the water and “nautical” as everything floating on the water. There are issues large and small that must be addressed if the park is going to reach its potential.

For example, although water quality has improved significantly since the passage of the Clean Water Act in 1972 and the Hudson is generally safe for swimming, many times it is too polluted to use. Every time it rains heavily, the city’s combined sewage system stops flowing to the North River Sewage Treatment Plant to prevent that facility from overloading. Instead, combined sewage — including motor oil, trash, animal waste, plastic bags and bottles, food packaging and other contaminants from neighborhood streets — dumps directly into the park’s water from combined sewer outfalls along the shoreline.

There were recommendations to build stormwater holding facilities under portions of the Hudson River Park and reconstructed Route 9A similar to one the city built to protect water quality in Jamaica Bay. However, when the highway and park were built, stormwater holding tanks were deemed prohibitively expensive.

The Trust must work with the city’s Department of Environmental Protection to design and implement alternative mitigation measures that enhance water quality, such as extending the outfall pipes further into the Hudson, where the river’s currents would carry storm effluent away from the park. This requires interagency coordination and cooperation, but it’s critical for public health and the health of the waterway.

The underwater portion of the park is also silting in with sediment traveling downriver and depositing along the shoreline, impeding navigation and recreation, and limiting opportunities for environmental restoration. It’s critical that the Trust develop and implement a comprehensive dredging plan to maintain navigation and enhance the usability of the park’s waterways. Dredging is expensive, but so is rebuilding and maintaining the park’s public piers and caring for its landscape.

The Trust recently relocated the berthing site for a historic ship at Pier 97, at W. 59th St. — which had been approved in an R.F.E.I. (Request for Expressions of Interest) — after the responses to the R.F.E.I. were received, with no consultation from experienced maritime professionals or a legitimate rationale for the change. Presenting the project to Community Board 4 for review, senior Trust staff declared that the state-city authority’s options for siting the berth were limited because no dredging was allowed in the park.

However, Section 8. 3. c) of the Hudson River Park Act, which deals with this estuarine sanctuary, clearly states that dredging is allowed: “Nothing in this subdivision shall impair the ability of the trust or other persons to maintain navigability or maintain, reconstruct and repair the piers and bulkheads… .”

In November 2017, Governor Cuomo committed to complete the park by the end of this current term in office and protect and restore the estuary as a priority. In 2018, he proclaimed that the Estuarine Sanctuary Management Plan, or E.S.M.P., would be completed and the marine sanctuary protected, and included $1.5 million in his FY ’19 capital budget for a pilot oyster restoration project in the park.

The original reconstruction of Piers 25 and 26 in Tribeca included an informal food concession and a fairly large estuarium to expand environmental education programs pioneered by The River Project. Somehow the space allocation formula was inverted, and Pier 26 now hosts a large restaurant advertised as “Offering year-round riverfront dining, live music, extraordinary views, and an elevated culinary experience” — yet there is still no plan, or adequate funding, for the estuarium, whose footprint has shrunk considerably.

One major obstacle to the proper stewardship of the park’s in-water assets and activities is the lack of experienced marine or nautical staff. The Trust should restructure its staff and develop a robust Marine Resources Department responsible for planning, programming, decision making and oversight of all activities in — and on — the water. This department should interact with all tenants, agencies and entities on the water’s edge that either regulate the waterway or have an impact on the park’s in-water resources, in order to minimize impact and maximize benefit to the park.

As the upland portions of the Hudson River Park reach completion, many waterfront advocates and park users increasingly understand the importance of providing appropriate stewardship of the park’s in-water assets and activities.

The Hudson River Park Trust must increase experienced professional marine staff, strengthen partnerships with relevant research and nonprofit organizations, and secure the necessary funding to ensure the health, restoration, use and enjoyment of the majority of the park for which it is named. It’s time for the Trust to take the plunge and focus on the stewardship of the entire park.