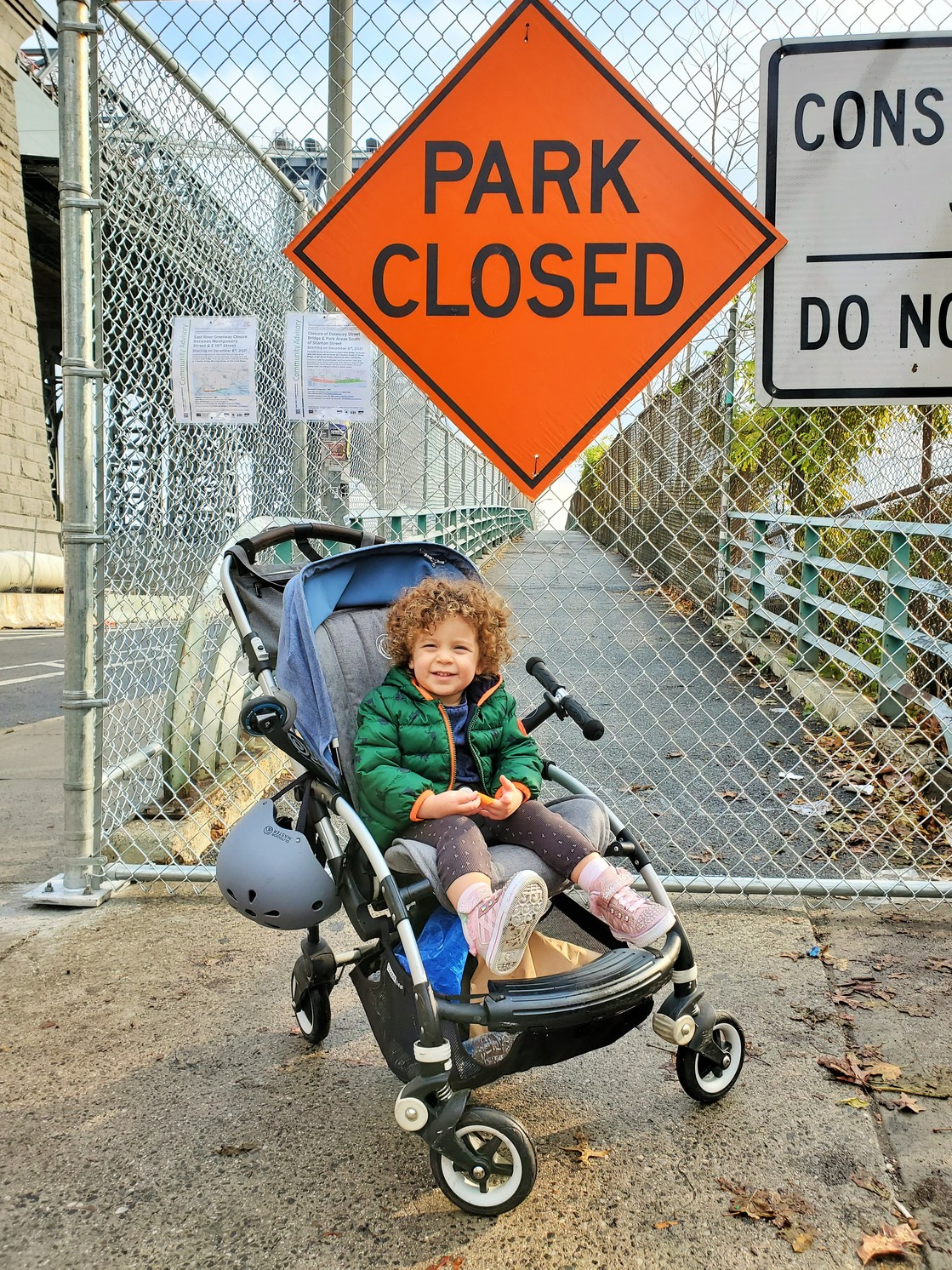 Lavender, 2, was out of luck as the Delancey Street footbridge to East River Park had earlier been closed off with a new chain-link fence Monday morning. (Photo by The Village Sun)

BY LINCOLN ANDERSON | Four protesters were arrested Monday as the city sealed off the southern end of East River Park, readying it for total demolition and deforestation as part of a first-of-its-kind coastal-resiliency project.

A half hour before sunrise, at 6:30 a.m., about 60 people had gathered at the East River Park amphitheater for a final rally. Among them were Christopher Marte and Kathryn Freed, the incoming and a former councilmember for District 1; Allie Ryan, who recently ran for City Council in District 2; and Zishun Ning, head of the Chinatown Working Group.

The outgoing District 1 councilmember, Margaret Chin, supports the current plan, the East Side Coastal Resiliency project, as do Councilmembers Carlina Rivera and Keith Powers, who represent Districts 2 and 4. Rivera’s district includes all of East River Park.

Around 7 a.m., the protesters moved up to Stanton Street, north of the dance oval, to hold a press conference as the workers had started to assemble there.

Later on, around 10:20 a.m., three protesters were arrested while trying to block workers from starting to dig holes to install posts for a chain-line fence to stretch across the park at Stanton Street. A police spokesperson said two men and one woman were issued Criminal Court summonses but did not provide further details.

After the row of metal posts had been installed, a handful of protesters stuck around as the workers began attaching chain-link fencing to the posts, making their way from east to west, plus a metal gate on the shared bikeway / walkway.

Around 4 p.m, Sarah Wellington was arrested as the workers were completing the fence, closing off the southern end of the park and the bikeway.

The city also plans to close off the rest of the park bikeway north of there, as well, but will leave open the park itself north of Stanton Street as part of the two-phase resiliency project. The $1.45 billion scheme, scheduled to take at least five years, would pile the park with tons of landfill to raise it by 8 feet to 10 feet.

Emily Johnson, who was among the group who continued to protest as the chain-link fencing was being put up, said she is not going to stop her ongoing activism against the contentious project.

A member of the Yup’ik Native people of Alaska and a Lower East Sider for the past five years, she describes herself as a land and water protector.

“This is a land grab,” she declared of E.S.C.R. “This plan is not necessary,” she stressed, adding that the floodwaters from Hurricane Sandy that deluged the neighborhood in 2012 came in at 14th Street and south of the park, not from East River Park.

The half-dozen protesters still left then sang an original song, “Which Side Are You On?” while straddling the actual line where the gate would go.

Some of the passing joggers — who around noon were still being allowed to run along the bikeway south of Stanton Street — smiled and clapped in support of the protesters. However, a hard hat supervising the fence’s construction assured that, once the barrier was finished, the park south of there would be closed.

About a dozen police officers and a Park Enforcement Patrol officer maintained a presence just south of the demarcation line as the work went on.

Before the song, one of the protesters, who goes by the name Four, had quickly dragged a plastic orange traffic barrel up next to a tree trunk and clambered atop it to remove a small aluminum tag from the tree. Four explained the tag had marked the tree for “ethical use,” such as for being made into things like benches. Four had removed 11 tags Monday and 50 in the past few days. Like Johnson, the activist identifies as a water and land protector.

Meanwhile, residents living near the park were adjusting to the idea of living without it for at least the next half decade.

Two young mothers wheeling their 2-year-olds in strollers were surprised to find the Delancey Street footbridge to the park closed.

Asked how she felt about it, one of the women, who gave her name as Ada K, said, “Dumbfounded. It’s like the only place we have. I knew it was happening, but I didn’t know it would be this soon.”

Her friend, Sophie, wondered aloud about taking the ferry from Corlears Hook to DUMBO, so the kids could at least play on “real grass.” The city is keeping a corridor open through the park to the ferry dock.

The Parks Department recently touted how some newly astroturfed spaces can be used for active and passive recreation to compensate during the reconstruction of East River Park. But park activists scoffed that fake turf is no substitute.

Nearby, a woman wearing a black beret and wheeling a cart heaped with laundry bags into the Baruch Houses on Delancey Street said she had been “on the fence” about the resiliency project. She admitted it irked her how the project had abruptly been switched from the previous plan, which would not have raised the park but rather would simply have installed berms along the F.D.R. Drive’s eastern edge.

“We need flood protection,” she said, declining to give her name. “I was on the fence. They did all these community meetings and got their input and then they changed it.

“This is our only park,” she stressed. “People who live in the residence have no place to go. We don’t have country houses to go to like wealthy people. The barbecues that we throw in there, that’s our vacation, that’s our celebration.”

A lifelong Baruch Houses resident, now 39, she currently works as a caregiver. She noted that during Sandy she lived on the F.D.R., though now resides further inland in the Housing Authority complex. The area by the F.D.R. flooded back then, she said.

“The water was up to here,” she said, putting her hand at her midsection. “There were people walking in the water. I don’t know what they were thinking because there were dead rats in the water — a lot.”

Although many of Baruch’s buildings are now ringed by new concrete floodwalls, she said she doesn’t know if it would be enough protection if another Sandy-level storm surge hits.

Mike Estevez, 28, another lifelong Baruch resident, said it definitely won’t be the same not having East River Park for the near future. He spoke above the din of a subway train roaring overhead on the Williamsburg Bridge.

“I grew up there all my life,” he said of the park. “Fourth of July, that’s where I go. It’s going go be different.”

Estevez, who sported tattooos on his neck and hands, had followed the protest earlier that morning. From his window he had seen “a lot of cops” in the park. He also got updates on the situation on the Citizen app.

As for whether he thought the park should be raised, he said he felt, in this case, he had to have faith in government — though he usually doesn’t.

Asked if he felt the new 6-foot-high floodwalls encircling some of the Baruch buildings could provide enough protection on their own, he shrugged that with worsening climate change, “it might not be enough.”

A lot of construction is currently going on all over the three public-housing developments bordering East River Park between 14th and Delancey Streets. However, on the Baruch Houses’ eastern edge, workers are not building floodwalls but renovating parking lots.

“This part didn’t flood,” a construction superviser explained to The Village Sun at one of these sites next to the F.D.R. “It flooded over there,” he said, waving to the western part of the complex.

Similarly, former Councilmember Freed previously told The Village Sun that the floodwaters at the east end of Grand Street, where she lives, “came from west to east. The flood didn’t come in over the park during Sandy,” she said.

Freed is co-counsel with Arthur Schwartz on the community lawsuit seeking to block E.S.C.R. Last week, the Appellate Division ruled against the lawsuit, but Schwartz is appealling to the state’s highest court, the Court of Appeals, with a hearing set for Tuesday.

In addition, the Con Ed plant at E. 14th Street, which was shut down during Sandy, cutting off electricity to Manhattan south of Midtown, has since been hardened against flooding to prevent another similar disaster.

John Frandoza, a contractor who was supervising a crane doing work on Avenue D at the Riis Houses on Monday, offered his perspective on the need for the park resiliency project. He lives on the other side of Houston Street in Baruch Houses.

As opposed to Baruch, the floodwalls at Riis are very small, just 4 feet high and located around the building entrances. At Riis, they have also put down a layer of plastic, buried under soil and rocks, around the bases of the buildings to floodproof them.

“Baruch is different, because there’s a hill at the F.D.R. [at Houston Street]. There’s a wall there,” he explained. “The water comes from the 10th Street area and the Williamsburg Bridge area.”

Frandoza, 43, said they are doing other resiliency work at Riis, like moving pipes and generators to the rooftops. That can’t be done at Baruch, though, he noted, since the roofs there are neither strong enough or big enough.

Asked if, despite all the protective measures being taken at the buildings, the park resiliency project was still needed, he thought for a moment, then said yes.