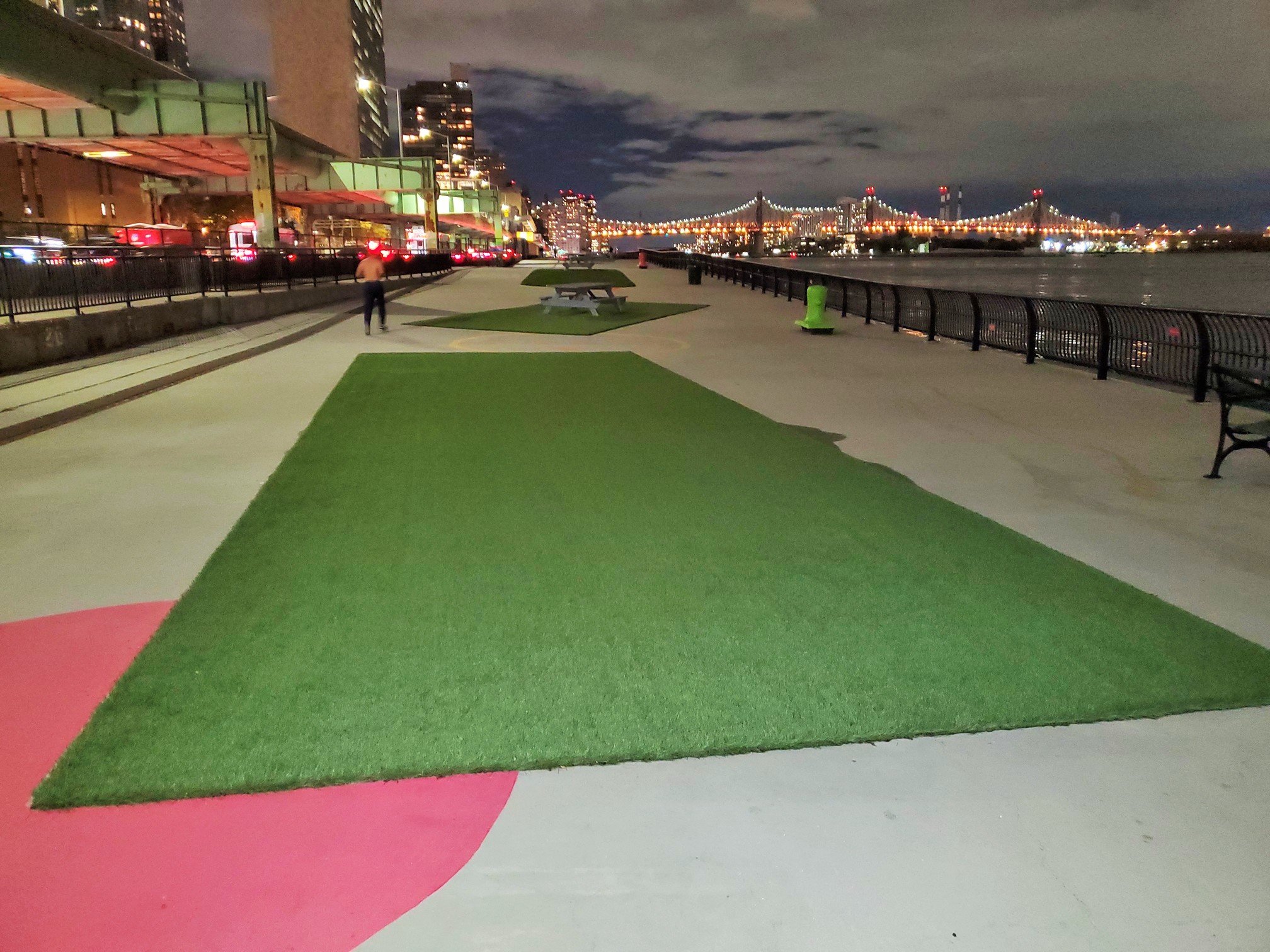 BY LINCOLN ANDERSON | A bunch of astroturf mats and picnic tables on a pier two miles away could help compensate for the loss of East River Park’s 60 acres. That’s the pitch, at least, from City Hall.

Last week, the Parks Department announced the addition of some new turf rectangles and picnic tables at Waterside Pier, between E. 38th and 41st Streets.

The concrete-decked pier now features eight mats of artificial turf grass, most of them measuring around 20 feet by 60 feet, with one smaller rug of 20 feet by 20 feet. There are also seven picnic tables. In addition, some colorful geometric shapes have been stenciled around the pier deck in spots.

The Waterfront Pier amenities are part of a wider rollout of synthetic turf to compensate for the loss of East River Park — should the contentious East Side Coastal Resiliency project go forward — by providing alternative park recreational spaces. E.S.C.R. would impact East River Park for at least five years, with around half of the one-mile-long waterfront park closed for construction at any given time. Nearly 1,000 mature trees would be felled for the project.

This past Wednesday evening around 7 p.m. the Waterside Pier was being used pretty much the same way it always has been. People were jogging on it. A few people were relaxing on benches near the water. No one was using the new picnic tables. Admittedly, the sun had already set and it was dark out. The plastic-grass squares were empty, except for a man playing with his dog on one of them.

Gregory Thom, 33, who is studying biodeversity and genetics and lives a few blocks away in New York University Hospital housing, was playing fetch with his Shetland sheepdog, Joy. Told that the astroturf patches were meant to partially substitute for the loss of East River Park located 25 blocks to the south, he was stunned.

He said Joy loves the real grass and earth underfoot at the East Village / Lower East Side riverfront park — and he does, too — and that astroturf simply cannot compare with the real thing. He had not been aware the Downtown park was slated for demolition.

“That’s terrible!” he said, laughing incredulously. “Usually we go there once or twice a week,” he said of East River Park.

East River Park, simply put, is the only large, real park — with real grass and trees — anywhere near them on the East Side, he said.

A couple more people and their dogs joined Thom and Joy on the turf mat and the dogs started tussling with each other. Thom noted that, at some point, he’s expecting “No Dogs” signs to pop up on the turf mats. In other words, while the grass is artificial, something natural might be deposited there.

“I wouldn’t sit on those if I were you,” he warned.

Tommy Loeb, a member of East River Park ACTION, a group fighting the E.S.C.R. project, scoffed of the Waterside Pier’s new turf mats and tables, “Check out what Carlina calls mitigation for East River Park. They have chutzpah to call this design. By who? Looks like about $100 at Home Depot.”

He was referring to Councilmember Carlina Rivera, a steadfast supporter of the resiliency project.

In addition to Waterside Pier, a lot more synthetic turf has been laid down on this side of town. On Oct. 1, Parks announced that it has installed three new fake-grass fields at East Side parks, converting asphalt play areas into new spots for passive and active recreation at St. Vartan Park, at 36th Street and Second Avenue; Robert Moses Playground, at 41st Street and First Avenue; and Peter’s Field, at 20th Street and Second Avenue.

In addition, artificial-turf fields have been installed on the Lower East Side at Tanahey Playground, at Cherry Street and Catherine Slip; and Little Flower Playground, at Madison and Jefferson Streets.

A Parks press release stated, “These renovations are part of the agency’s open space mitigations responsive to the community’s need for supplemental recreational resources during the East Side Coastal Resiliency project — a $1.5 billion park improvement project that will save lives and provide much-needed flood protection for more than 100,000 New Yorkers in the area.”

“These turf fields are a win for the community!” Parks Commissioner Gabrielle Fialkoff said. “We’re happy to see that the new green spaces at St. Vartan Park, Robert Moses Playground and Peter’s Field are already well used by parkgoers looking to play baseball or soccer, exercise or just enjoy some time outside. These projects build on our commitment to making sure surrounding neighborhoods have access to recreation and open space while we work to provide lifesaving flood protection through the E.S.C.R. project.”

Councilmember Rivera backs the resiliency plan as essential despite staunch resistance to the park-destroying scheme from a vocal opposition, including the groups East River Park ACTION and 1,000 Trees 1,000 People. A lawsuit to stop E.S.C.R. is also on appeal.

“Since we embarked on East Side Coastal Resiliency, we have welcomed suggestions from the community on enhancing access at other open spaces during this essential project,” Rivera said. “Ensuring impacted residents have alternative sites available for recreation throughout the project’s duration was of the utmost importance. I am grateful to the Parks Department for their swift work in bringing improvements and new amenities to our beloved open spaces. The new turf fields at Peter’s Field in Council District 2, as well as St. Vartan’s Park and Robert Moses Playground, are emblematic of the city’s ongoing efforts to deliver long-lasting, positive impact to our community as we continue to work toward climate resiliency.”

A map of the fields and other recreational resources in the neighborhoods surrounding the E.S.C.R. project area can be found on the Parks Department’s Web site.