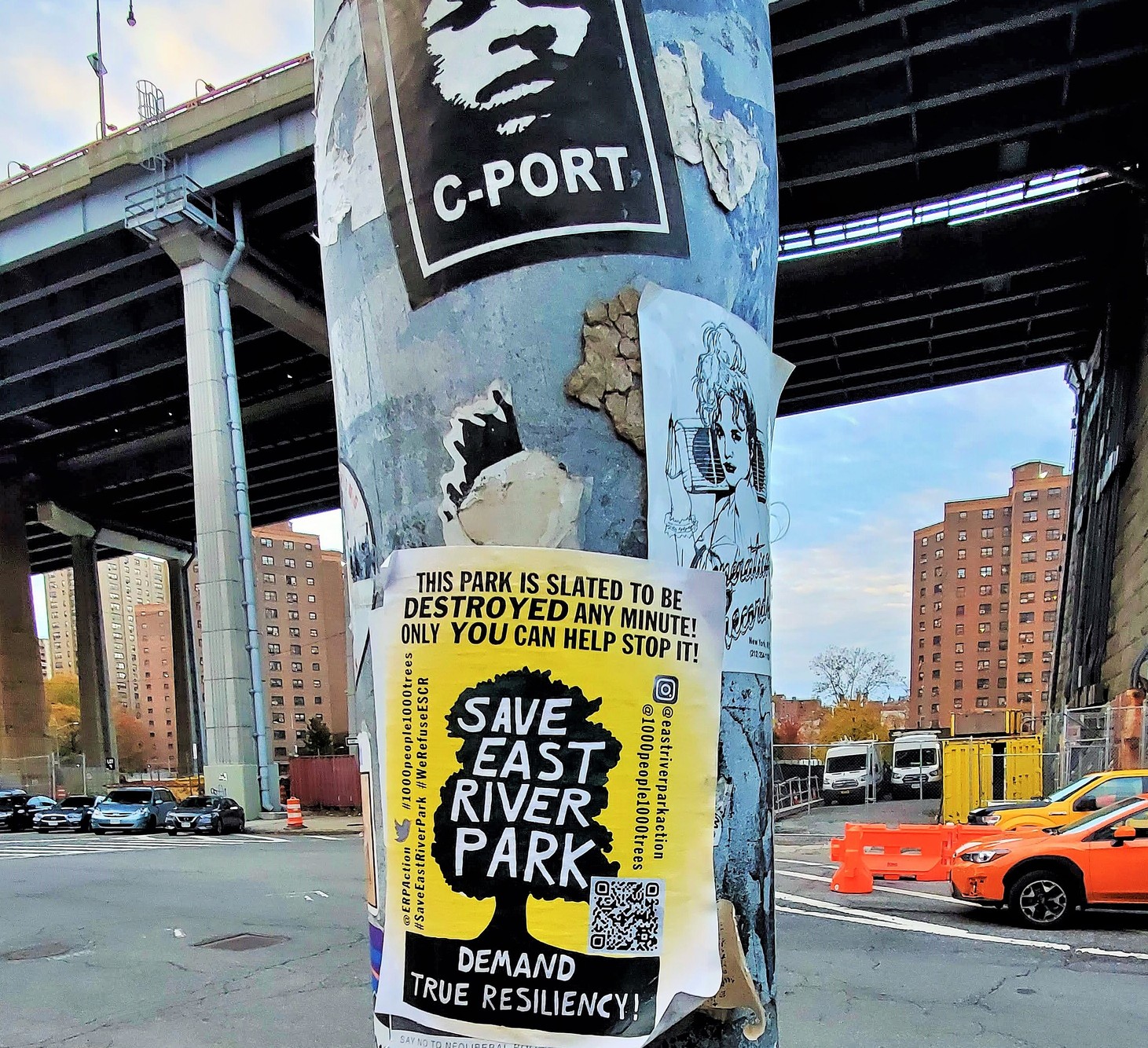 Opponents of the East Side Coastal Resiliency project have flooded the neighborhood with stickers and fliers, like this one on Delancey Street. (Photo by The Village Sun)

BY THE VILLAGE SUN | A legal appeal seeking to stop the East River Park anti-flooding megaproject has washed out with an appeals court.

On Tuesday, the Appellate Division, First Department, ruled against the appeal of the community lawsuit that seeks to keep the East Side Coastal Resiliency project from destroying the existing East River Park. A lower court had previously also ruled against the lawsuit.

The suit argues that, under the public trust doctrine, the state Legislature must hold an “alienation” vote before removing the current East River Park from use as a public park for an extended period — in this case, for five years or more — to raise it from 8 feet to 10 feet to put it above the Federal Emergency Management Agency’s 100-year floodplain. The $1.45 billion project would be done in two phases, purportedly leaving 40 percent of the park open at any given time during the construction.

The decision means a court-ordered temporary restraining order against demolition and construction in the park that was granted Nov. 4 has been lifted, allowing work to proceed. Work had commenced Nov. 1 before Village attorney Arthur Schwartz quickly secured the T.R.O.

Schwartz, who is representing around 100 individuals and 20 activist groups, including East River Park ACTION, in the suit, slammed the latest ruling as “a tremendous loss for the whole community.” He said he plans to appeal the case to the state’s highest court, the Court of Appeals, by next week.

City Councilmember Carlina Rivera, whose district includes the roughly 50-acre park and who strongly backs the resiliency plan, did not respond to a request for comment on the court’s decision.

East River Park, which opened in 1939 under then-Parks Commissioner Robert Moses and today includes nearly 1,000 mature trees, would be totally deforested under the project. Just about everything else in the park would be bulldozed, too, including the running track, ball fields, basketball courts, riverfront esplanade and two historic park buildings designed under the Works Progress Administration.

The lawsuit argues that the E.S.C.R. project, in fact, is not primarily a park project — that its main goal is to turn the park into a floodwall, a nonpark purpose, and, only secondarily, to protect the park itself from flooding.

However, the Appellate Division, in its decision, wrote, “We hold that the project at issue, a coastal flood protection system, which has the dual purpose of benefiting the park and the surrounding community, serves a ‘park purpose’ exempting it from obtaining prior state approval under the public trust doctrine. …

“Notwithstanding petitioner’s arguments, the record is clear that coastal flooding protection will greatly benefit the park,” the court said. “Located immediately next to the East River, the park is vulnerable to coastal flooding, even more so than the communities lying inland to the west. This project is made with the intention of saving the park from degradation due to surging saltwater from the East River during storms that, over time, have increased in ferocity. … [P]etitioner’s argument is that any project that serves a park purpose cannot serve a dual purpose. … This is too narrow a reading of the park purpose requirement.”

The E.S.C.R. project is an outgrowth of the city’s response to the severe flooding from Hurricane Sandy in 2012. An earlier design of the resiliency plan — crafted over several years through local outreach meetings and enjoying greater community buy-in — was far more low impact; that earlier plan did not call for first razing and then raising the park, but mainly for the addition of berms along the F.D.R. Drive and some other floodwalls. But in 2018 the city abruptly switched gears to the current “elevated park” plan.

The court noted, in its decision, “According to the city, the earlier design alternative considered was not feasible because it called for nighttime construction to avoid daytime F.D.R. [Drive] closures, the work would be loud, and the berms would be built on top of high-voltage transmission lines requiring special safety measures. The revised plan allows construction equipment to be delivered to the site by water, reducing truck traffic through the community. The city also contends that in the long run the original proposal would have done little to protect the park from future flooding, yet it would have been expensive to implement.”

The court described the damaging effects of East River water from Sandy on both the surrounding neighborhood and the park.

“The water was reportedly four feet deep in many places,” the court wrote, “flooding homes and businesses, and damaging parts of the local infrastructure, including the energy grid, water and sewer facilities and transportation services. …

“Given the corrosive nature of saltwater, the park’s energy, water supply systems and drainage infrastructure were severely damaged by Sandy as well,” the court added. “The city warns that Superstorm Sandy was a wakeup call, and a harbinger of things to come, because the park’s bulkhead is degraded, and that with continued degradation it may altogether collapse.”

Opponents, though, counter that the park was naturally resilient during Sandy, “like a sponge,” and quickly bounced back after the floodwaters receded.

In a statement on the court’s decision, attorney Schwartz said, “First, this is a tremendous loss for the whole community from Grand Street to 14th Street. Bill de Blasio HAD to get this started, and not allow Eric Adams to reassess it, because this is one of the marks he wants to leave on NYC. It will be a scar.

“The project is scheduled to take five years, but it is now almost two years behind schedule. For the next seven to 10 years East Siders will have no real park to recreate in. The bikeway along the park will be closed, and it is one of the key bike paths in Manhattan. The kids who live in the East Village and Lower East Side will grow up without access to ball fields and basketball courts and places to run and play. Trees which have been in place for 80 years will be cut down. And none of this is necessary.

“Second, I believe that the court is wrong in two respects,” Schwartz continued. “First, they repeat the unsupported assertion that the park is frequently flooded by seawater. That hasn’t happened once since Hurricane Sandy. The park doesn’t need to be destroyed in order to be saved. The case law doesn’t stand for the proposition that if the city combines what it calls a ‘park purpose’ with the real purpose — building a seawall — that it eliminates the need for alienation legislation from the state. The court could only point to a case involving putting a bike rack in Petrosino Park. But there, the court found that bike riding was recreational and was a park purpose.

“We do think that the Court of Appeals will take interest in this case, since it presents an issue that that court has never addressed before. We should be filing by next week.”

As Schwartz noted, in justifying their decision, the Appellate Division cited as “illustrative” Matter of Friends of Petrosion Sq. v Sadik-Khan, a 2015 case contesting the installation of a Citi Bike docking station in Nolita. Neighbors had argued that the bike station on the diminutive park triangle was a nonpark purpose.

However, the Appellate Division court noted, “[State] Supreme Court concluded that the installation was a proper park purpose, because ‘a bike share station has a direct connection to the important park purpose of bicycle recreation and allows easy access to and further encourages the use of parkland by the public.’” The Appellate panel said it agreed that the bike station was “an appropriate incidental use of parkland [that] contributes to or facilitates the use and enjoyment of the park,” and that even merely getting or docking a bike at the park was a park use.

In addition, Schwartz recently filed another lawsuit against the city over the E.S.C.R. plan, specifically about the project’s construction contract, charging that it falls far below the mandated hiring guidelines for Minority and Women Owned Business Enterprises (M/WBE). The suit accuses the E.S.C.R. contract of being “a profound act of discrimination.”