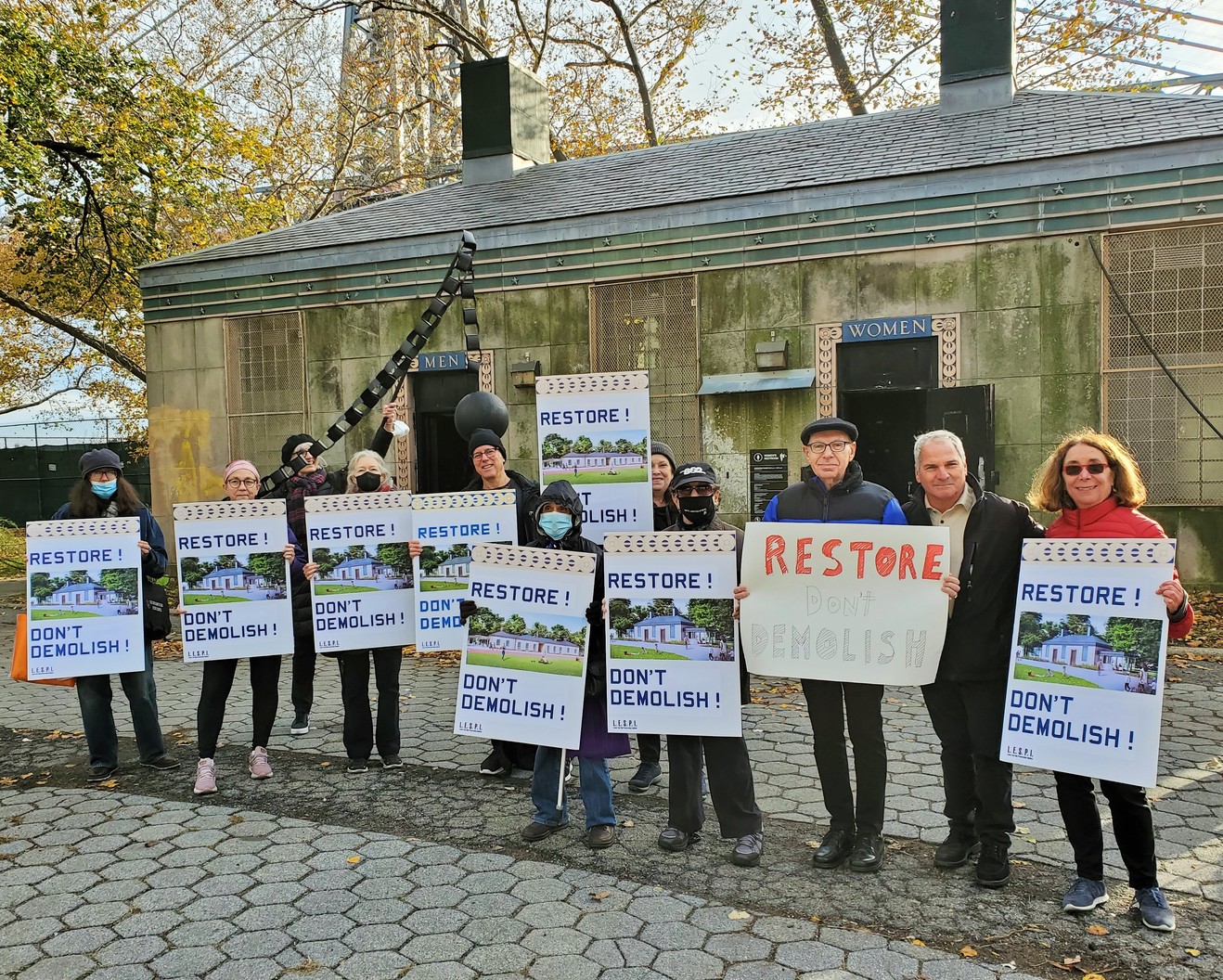 Richard Moses, president of the Lower East Side Preservation Initiative, fifth from left, and fellow preservationists rallied outside the East River Park tennis courts comfort station on Nov. 13. (Photo by The Village Sun)

BY LINCOLN ANDERSON | There are currently no less than three lawsuits lodged against the East Side Coastal Resiliency project. Golf carts are exploding into flames on the East River Park tennis courts. But that’s not all.

Preservationists are up in arms about two historic buildings in the park that are threatened with demolition.

On Sat., Nov. 13, members of the Lower East Side Preservation Initiative and allied groups rallied outside one of them, the park’s Art Deco / Art Moderne tennis center comfort station. The other is the track house, a bit farther to the north. Both structures were built in 1939, the year that East River Park opened, under then-Parks Commissioner Robert Moses.

For two years, LESPI, neighbors and other preservation groups have been advocating for the two buildings to be saved. Both structures are eligible for the National and State Register of Historic Places, which, according to the advocates, legally requires that their preservation be seriously considered as part of the federally funded E.S.C.R. project.

“What we want is for the city to restore and renovate these important historic buildings in the new park under the E.S.C.R. project instead of demolishing them,” said Richard Moses, president of LESPI. “Over a year ago the New York State Historic Preservation Office deemed both to be eligible for the State and National Registers of Historic Places, so the city has a responsibility to do its best to preserve them. But instead of preservation, we get stonewalled, with only a promise to photograph the buildings before they’re demolished.”

Joining the rally to save the buildings were Christopher Marte, the First District’s councilmember-elect; George Calderaro of the Art Deco Society; Michele Campo of Bowery Alliance of Neighbors (BAN); Mitchell Grubler of Friends of the Lower East Side; Lorna Nowve of the Historic Districts Council; Laura Sewell of the East Village Community Coalition; and Village Preservation.

A statement by Peg Breen, president of the New York Landmarks Conservancy, was also read: “It’s unfortunate that a project that is designed to protect the Lower East Side won’t protect and reuse two buildings that enhance the park and remind us of the area’s history.”

Under the currently embattled E.S.C.R. project, the entire 60-acre East River Park would be deforested, with all of its nearly 1,000 mature trees cut down, and most of its structures demolished. The park would then be raised 8 feet to 10 feet, putting it above the floodplain to protect the bordering community from a repeat of the coastal flooding seen in Hurricane Sandy in 2012. Meanwhile, the plan’s opponents back an earlier resiliency scheme that would not destroy the existing park.

For their part, though, the preservationists are not weighing in on the coastal-resiliency project itself.

“We’re not taking a position on that,” Richard Moses said. “It’s so controversial. LESPI is really about protecting and preserving the streetscape.”

But, they contend, if the park is to be elevated, then so can the two buildings. It’s been done before and with much bigger structures, Moses noted. Also, construction on the park can happen around the buildings, while preserving them, he added.

During the rally, in the park about 100 feet to the north, a detail of police casually stood posted beside their vehicles. Just two days earlier, someone had torched two golf carts left parked inside the closed-off part of the tennis courts. The city had started preliminary demolition work at the courts on Nov. 1, but was forced to stop three days later after a temporary restraining order was granted as a lawsuit appeal on E.S.C.R. is being heard. After Sunday’s rally ended and most people had left, the police promptly got into their cars and drove off.

The two Depression-era park buildings are humble affairs, the one at the tennis courts draped in a layer of green lichen. But Moses (the preservationist not the “power broker”) stressed these are “not your everyday historic structures.” They were, in fact, designed by Aymar Embury, Robert Moses’ lead architect at the Parks Department during the 1930s Works Progress Administration era. The prolific Embury also designed the Triborough Bridge.

Originally, there were three other similar buildings in East River Park but they were long ago demolished. As a result, these two buildings, as Richard Moses put it, are “the last markers of our park’s architectural history and of its links to Franklin Roosevelt’s celebrated New Deal, which provided the funding [to create them].”

“Although the buildings now look dirty, their limestone, terracotta and slate exteriors remain in good condition,” the preservationist added, “and with a simple cleaning their facades would sparkle. The buildings would have all-new interiors that would sparkle, too.”

The city wants to rebuild the two structures, adding concession areas onto them, among other things. But Moses and his allies said the existing buildings can be retrofitted with overhang extensions on their ends to create areas for concessions and the like.

“While we respect the goal of the E.S.C.R. project to provide timely floodproofing of the park,” Nowve, the interim director of H.D.C., said, “we urge the city to honor and preserve these historic buildings. ‘Resiliency’ has many meanings. We urge the city to embrace a more sensitive approach to its proposed plan. The waterfront will be protected and the park’s history will be enhanced.”

Councilmember Carlina Rivera, a staunch supporter of E.S.C.R. whose district includes the park, did not respond to a request for comment on the preservationists’ plea to save the existing park buildings.