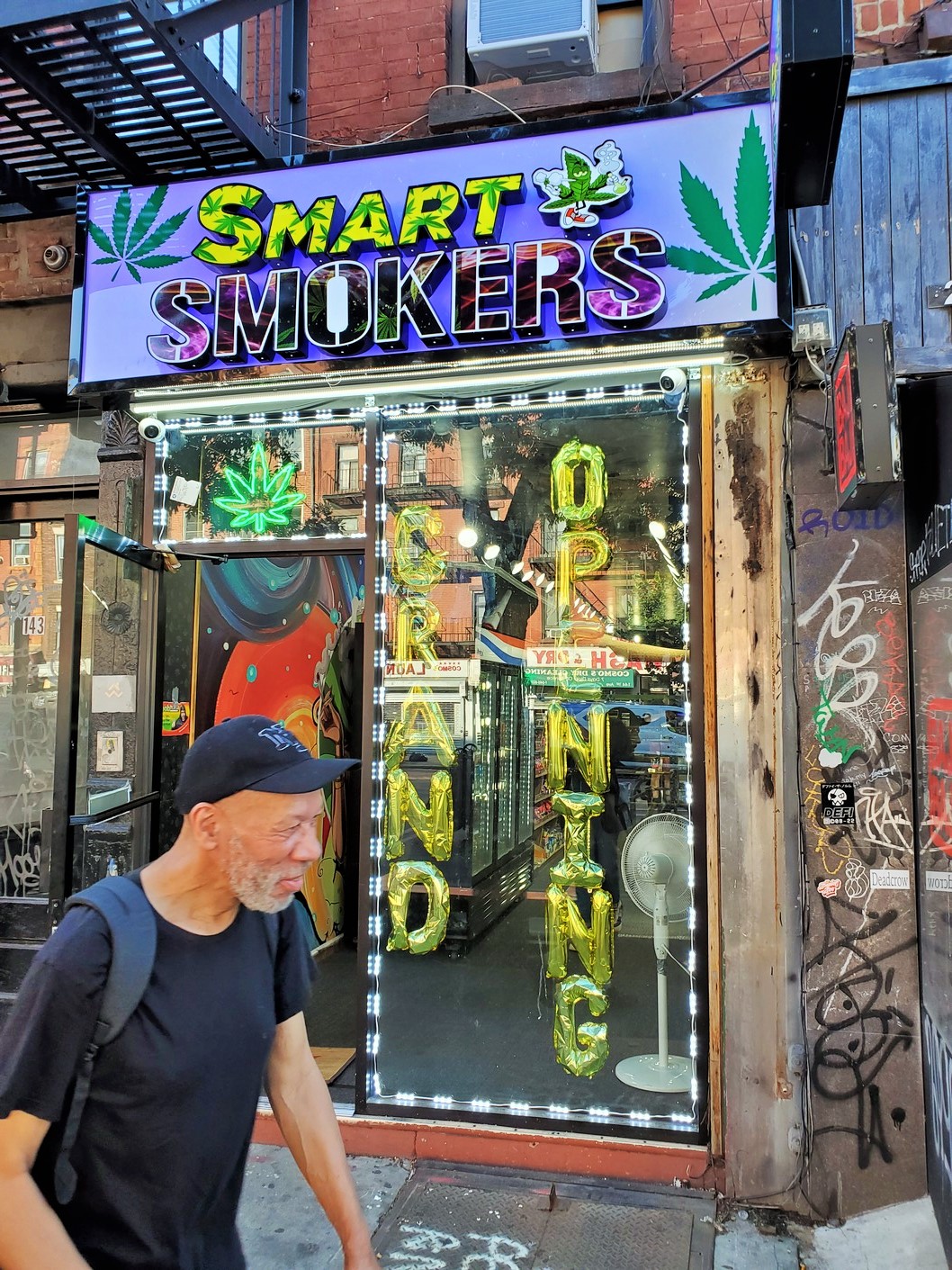 This past spring, yet another smoke shop, Smart Smokers opened on First Avenue between St. Mark's Place and Ninth Street. (Photo by The Village Sun)

BY JOSEPH ZARIF | On a Saturday evening, Ted, a 20-year-old student bar hopping in the East Village found himself craving a high. Within seconds, he located Runtz Tobacco, on First Avenue at First Street, one of the many smoke shops filling the corners of the neighborhood.

Inside the brightly lit store, which reeked of the herbal scent of marijuana, a wide selection of cannabis products — such as mylar bags of cannabis flower, pre-rolled joints and infused candy edibles — with exaggerated colorful branding were on display. The underaged stoner left the shop with a $15 pre-rolled joint after asking one simple question: “What would get me, like, the most baked?”

This scene is nothing unusual in New York City, where the illicit cannabis market has been left to flourish in the absence of a legal one. However, on Nov. 21, the New York Office of Cannabis Management approved 36 Conditional Adult-Use Retail Dispensaries, or CAURD, licenses.

This recent announcement was a part of O.C.M.’s process of approving 150 out of 903 CAURD applications. Only four of the new 36 legal locations are going to be in Manhattan, excluding a plethora of shops operating in the booming black market. Crackdowns on the unregulated cannabis market in New York City can possibly follow the introduction of the legal one, but those operating illicitly don’t seem concerned.

Milo at Runtz Tobacco is one of these many vendors dealing out in the open in the unregulated market, selling weed without a license. While the shop owner claimed to have applied for one, and was hopeful to receive it, he nevertheless expressed his lack of concern about the future of his business. Milo hasn’t been significantly bothered by the authorities lately, and doesn’t believe he will be bothered in the future.

“They’re worried about other stuff, bigger crime,” reasoned Milo, nonchalantly shaking off any notion that change could be coming. “We do get people here sometimes, inspecting s— and stuff, but there’s not much they could do.”

Though difficult for black market vendors to imagine any crackdowns, projections from experts in the industry like cannabis attorney David C. Holland suggest otherwise. Holland predicts that once the legal market is introduced, O.C.M. and the city’s Department of Finance will come into those locations that are illegal, impose fines and try to shut them down. He also credited the indifference of vendors like Milo toward the new legal market to the lack of an enforcement mechanism.

“As long as that remains uncertain, and the legal market has not taken hold, you can expect those illegal shops to continue on,” Holland said. “This is because many of the people operating them have exposed themselves in the past to much greater risk and much greater punishment than exists at present.”

This greater risk and punishment Holland referred to was the stronger enforcement in the past when marijuana was criminalized altogether. According to O.C.M. spokesperson Taylor Randi-Lee, while the new agency does not want to get people in trouble, enforcement against unregulated businesses in the form of warnings and fines will definitely increase. Randi-Lee made clear there is no room in the state’s plans for what she called, “illicit sellers selling in an illicit market.”

She emphasized the equitable approach of giving back to those most affected by past punitive cannabis laws, and how vendors without licenses fail to contribute to that new principle.

“They are not contributing taxes, nor contributing to groups in the community that need resources,” she said. “It goes against what we’re trying to build, an equitable market.”

At the Manhattan Smoke Shop, another brightly lit business neaby on First Avenue at Second Street, Ibrahim, another vendor operating illicitly in the East Village, also expressed little concern about the future. He explained that authorities bother him more about his tobacco and vape products than the cannabis ones. Despite initially saying he applied for a CAURD license, Ibrahim later clarified that he, in fact, did not due to the application fee, which he falsely claimed was $300,000. The real fee was $2,000. In any event, Ibrahim dismissed the need for having one as altogether unnecessary.

“They bother me about vape, shisha [for hookahs] and tobacco products,” he emphasized. “Marijuana, they say nothing about that”

There is still much gray area on how real enforcement could look in the near future. The Manhattan District Attorney’s Office, for example, has also not clarified how it plans to deal with illegal cannabis sales after the opening of legal stores and has not been taking action against vendors to begin with.

It was in an interview on “The Brian Lehrer Show” on WNYC radio, that D.A. Alvin Bragg first addressed his office’s policy once the legal market launches. He basically emphasized enforcement on youth sales and driving while impaired. How that would be done, though, is unclear.

Although the actual details of enforcement against unlicensed sales remain confusing, one thing seems clear: Unlicensed vendors are around and will likely stay, at least for the meantime. The specific details on possible fines or even prison time for illicit ganja merchants are unknown, as well.

Of the future, Ibrahim laughed, shrugging, “If they come, take whatever they want. I don’t care. We can always buy more.”

But maybe he and his fellow cannabis peddlers shouldn’t be quite so cavalier. The Daily News reported last Friday, in a front-page story, that more than 600 pounds of weed — worth a total of more than $4 million — was recently confiscated by the city’s Sheriff’s Office and other agencies during a two-week crackdown on unlicensed pot peddlers across the city. Five hundred civil summonses and 66 criminal summonses were also issued. The coordinated action happened in late November and early December.

“Our goal is not to incarcerate,” Mayor Adams said in touting the cannabis crackdown. “It is to confiscate and educate that this is not how it’s going to happen in New York.”