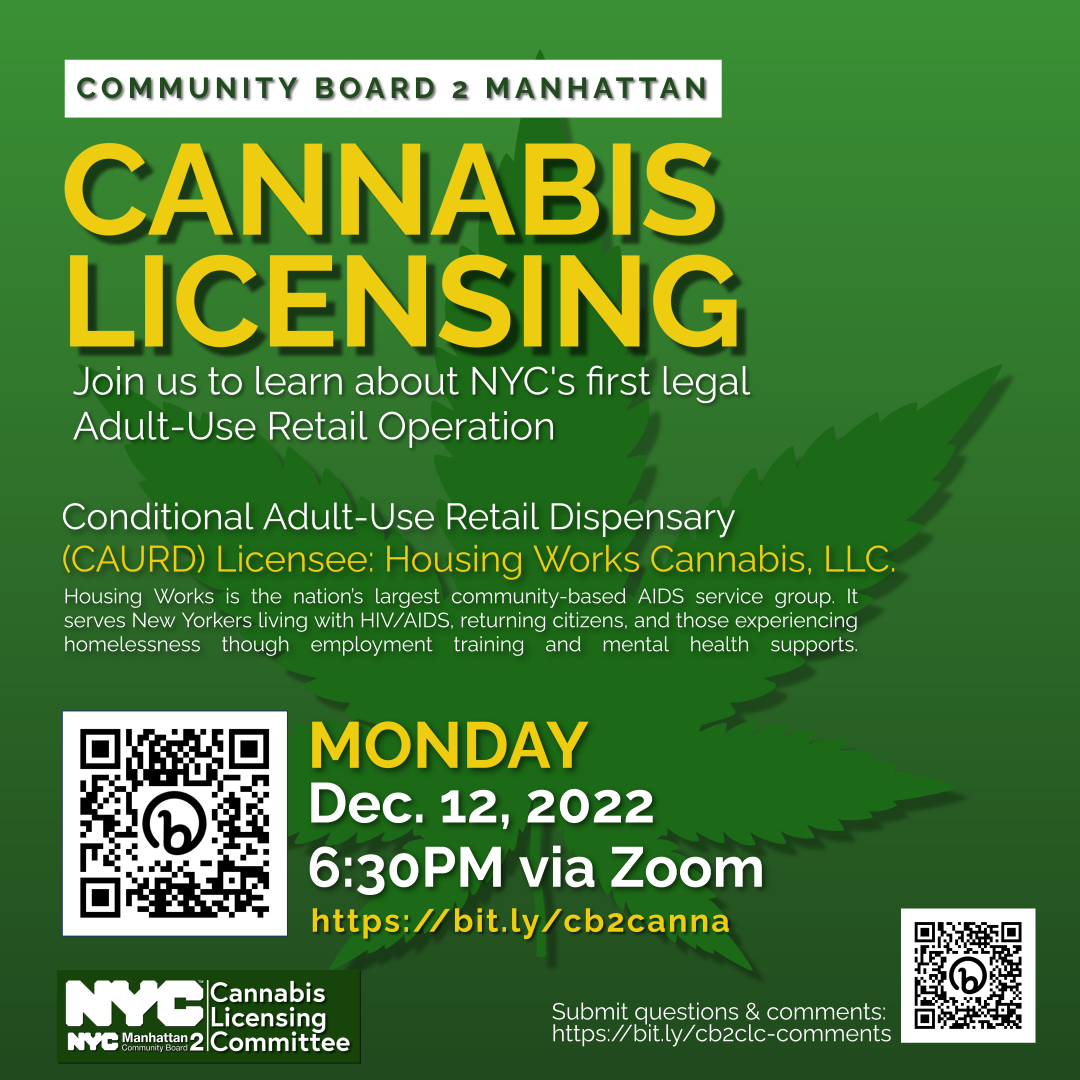 First, however, the applicants will appear before the C.B. 2 Cannabis Licensing Committee on Mon., Dec. 12, at 6:30 p.m. (To register for the meeting, go to https://bit.ly/cb2canna. Questions and comments can be submitted at https://bit.ly/cb2clc-comments.)

The plan is to license a total of 150 adult-use dispensaries throughout the entire state in the current first round of applications.

Mar Fitzgerald, the C.B. 2 committee’s chairperson, said 36 licenses are currently being handed out citywide, including to 28 entrepreneurs and eight organizations. The first two at least will be in the board’s coverage area.

“We’re talking the first operational legal cannabis dispensary in the state will be in Community Board 2,” Fitzgerald said. “I can say that with confidence.”

One of these is Housing Works Cannabis, a division of the AIDS-service organization Housing Works, which hopes to open a marijuana site at the high-profile address of 750 Broadway, at Eighth Street and Astor Place, formerly home to a Gap store.

The application is for “Sale of regulated and adult-use rereational cannabis (flowers, pre-rolls, tinctures, concentrates, edibles, etc.) and related products to adults 21 years of age and older, with an emphasis on social equity, minority, women- and L.G.B.T.Q.-led brands.”

The site will both sell pot and allow for on-site consumption. One thing the location won’t have is garish signage, the application states. Housing Works says the dispensary will also have a focus on job training.

There will be a minimum of three security personnel on site during business hours, according to the application.

The second applicant is for the Doe Store, at 835 Broadway, on 13th Street between Broadway and University Place, near Union Square, submitted by the Doe Fund, an organization that provides temporary housing and job training and works to reduce criminal recidivism.

The Doe Store’s mission statement says, “We’re an authentic lifestyle cannabis brand that gives back through our partnership with The Doe Fund, while highlighting BIPOC- and women-owned brands, and providing clean, safe and reliable products to our consumers.”

The store’s target market is between the ages of 25 and 55. There will be a minimum of three security personnel on hand.

Fitzgerald said C.B. 2 could also see a third legal pot store in this first round of licensing — although negotiations are still ongoing with the landlord, so she did not want to reveal the address or the applicant at this point.

One member of a local civic group, however, who requested anonymity, said she is already concerned about the ongoing explosion of illegal pot stores in the area, and is now worried about the size of the Housing Works space.

“These shops have been gradually popping up for three years now,” she said. “Last week the 9th Precinct said they have 21 illegal shops just on First Avenue alone.

“Of much greater concern to us is Housing Works opening a dispensary on Broadway between E. Eighth Street and Astor Place My trepidation is the enormous size of the combined Gap spaces.”

She was concerned that the site could hypothetically “grow to include a thrift store, bookshop and/or homeless drop-in center.”

On another note, Fitzgerald said no so-called “legacy entrepreneurs” were awarded licenses in this round.

In June, Fitzgerald held a committee meeting, dubbed “Legacy to Legal,” looking at how longtime local pot entrepreneurs can enter the new legal pot market and contribute their expertise to it. Among the event’s featured entrepreneurs were Coss Marte of CONBUD, who is the brother of Councilmember Christopher Marte; Vladimir Bautista of Happy Munkey; “Hawaii” Mike Salman of Chef for Higher; Byron Bronson of Buddy’s Bodega; and Dorian Harrington of UNLOC, the son of Ayo Harrington — a former co-president of Coalition for a District Alternative and former Community Board 3 member — and a cousin of Fitzgerald.

The legacy sellers, some of whom are also growers, said they know how to supply the best and highest-quality product and definitely don’t want to be locked out of the new market. However, putting them in a bind, anyone currently operating an unlicensed pot business in New York is disqualified for a license.

Coss Marte, for example, noted that sometimes people come into his Lower East Side workout center, CONBODY, asking to buy weed, but he won’t currently sell to them, not wanting to jeopardize his chance at a legal license.

Also, applicants must show two years of positive revenue from a business of which they owned at least 20 percent.

Said Fitzgerald, “All the things that the incoming cannabis entrepreneurs need to know, these people have that. To not engage these people in this is insane.”

But attorney Stanley Cohen scoffed at the veteran pot purveyors’ claims of having special abilities or experience that would merit getting a license or otherwise getting in on the ready-to-boom legal trade. In addition to being a radical attorney who represents Hamas and formerly represented East Village squatters, Cohen currently is also working for clients seeking a slice of New York’s legal cannabis action.

He noted he has had to weed out — no pun intended — at least a half dozen potential clients who were fronted by a person of color but were really “bankers, Wall Street guys, hedge-fund guys.”

Under the state’s Marijuana Regulation and Taxation Act, 50 percent of all adult-use licenses will be awarded to social- and economic-equity applicants, including those from “disproportionately impacted communities,” such as those who have been arrested or convicted for pot offenses in the past.

However, as for any current New York weed businesses winning a license, Cohen said, “If they’re still running it now, they’re not going to get it.”

He downplayed the ganja-selling veterans’ know-how.

“What kind of experience do you need to run a f—ing pot spot?” he asked, incredulously. “I mean, it’s not a big deal. Does it take a rocket scientist to say, ‘I need to order $12,000 worth of pot this week’? We’re talking about selling product over the shelf in the stores. This is not acupuncture or a chain of health clinics treating Alzheimer’s.”

Some — like the concerned woman quoted above — wonder if New York will be able to rein in the army of illegal pot shops. But Cohen said it will happen here — as opposed to on the West Coast, where outlaw pot shops are running wild.

“California’s falling apart because the gray market is destroying the licensed market,” he noted. “The gray market [here] is going to go away. New York will start going after illegal stores. They’ve already started cracking down on the stores — seizure, forfeiture, fines. I wouldn’t invest in new stores opening up.”

As for the legacy sellers of the likes at the C.B. 2 meeting, he shrugged, “Yeah, the mom-and-pop places will keep doing it.”