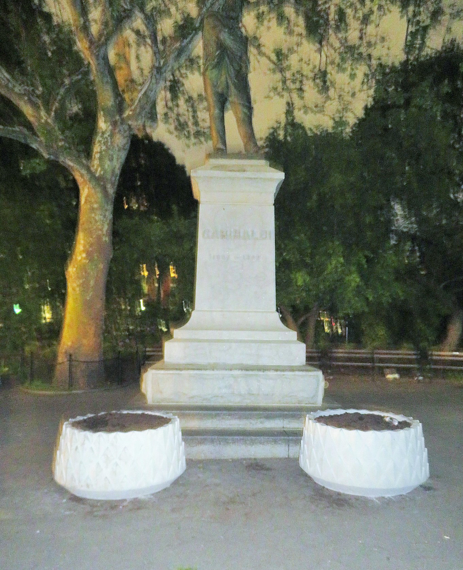 Anti-skateboarding planters have been added in front of the Garibaldi monument in Washington Square Park. (Photo by Everynight Charley Crespo)

Garibaldi vs. skateboarders; Planters are the new ‘battle plan’

Giussepe Garibaldi, considered one of the greatest generals of modern times, might well have appreciated this tactical maneuver.

To keep skateboarders from jumping on and grinding on the Garibaldi statue in Washington Square Park, the Parks Department has added two planters in front of it.

From a design standpoint, the plain pots probably won’t win any medals. But strategically, it looks like it could work.

The planters are part of the Parks Department’s new campaign to combat skateboarding in the park. The effort started in April with “education” efforts — as Parks Enforcement Patrol officers have been communicating to the shredders that they cannot ride and do tricks in the landmark location. That is now supposed to be followed by a period of enforcement, where tickets of $50 to $75 are handed out.

However, while cyclists are now — after a year of lax enforcement — once again being ticketed for riding through the park, word is that skateboarders are still getting a pass.

But if the PEP’s do ever start to crack down, the skateboarders can’t say they weren’t warned. Along with the anti-grinding planters, Parks also recently posted signs at the Greenwich Village greensward’s entrances stating that skateboarding, bicycling and scooter riding are not allowed.

In a statement to The Village Sun, Charisse Hill, a Parks Department spokesperson, said, “Our Parks Enforcement Patrol (PEP) officers are collaborating with N.Y.P.D. on efforts to educate parkgoers about skateboarding rules and increase enforcement. We’ve installed new signs at Washington Square Park that communicate these rules at every entrance.”