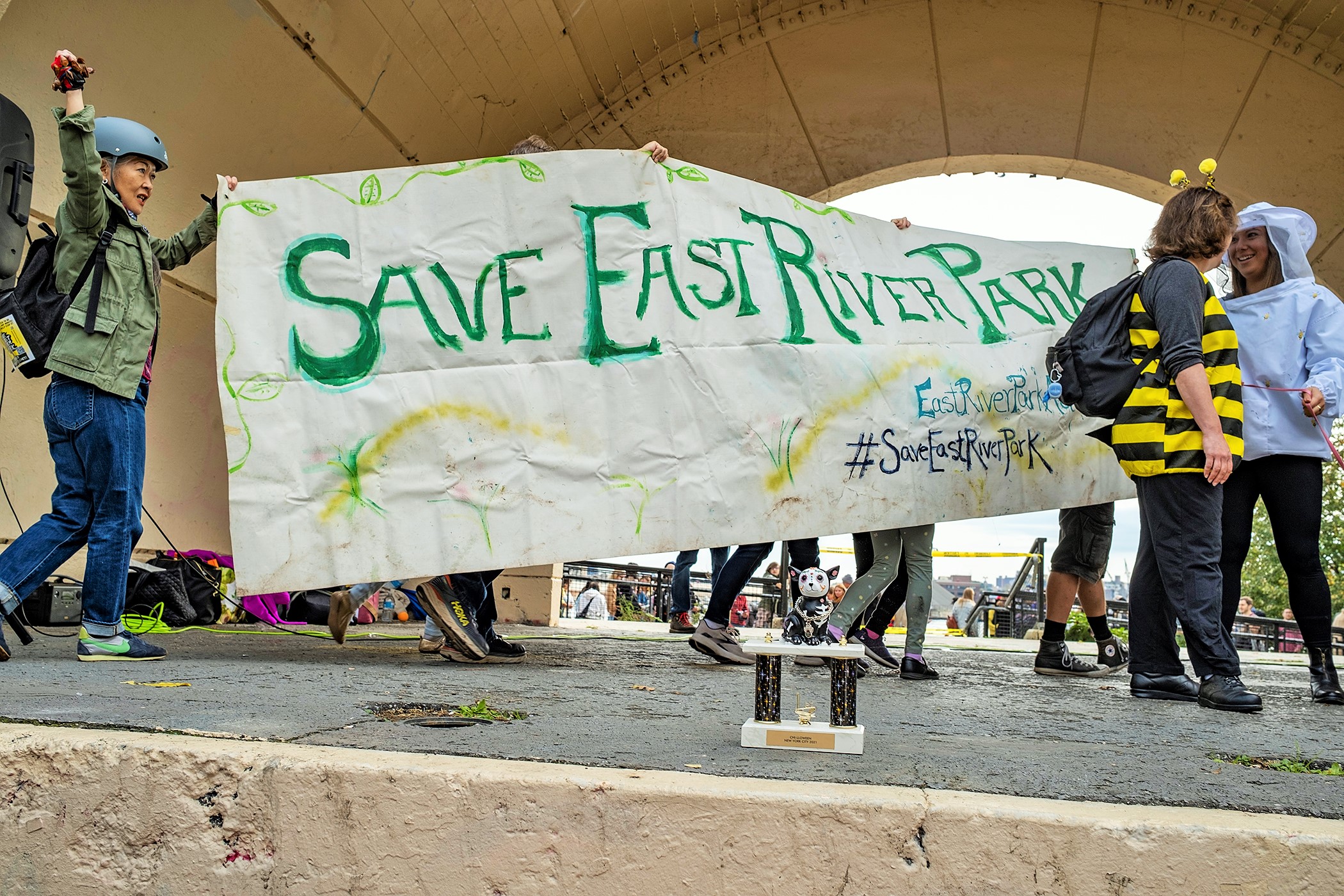 BY LINCOLN ANDERSON | The bulldozers and chainsaws are still being kept at bay in East River Park — at least for now — as a temporary restraining order continues to hold.

Per the order last week of an Appellate Division court panel, the T.R.O., or “stay,” remains in effect so far, pending the panel’s decision on a legal appeal by opponents of the city’s East Side Coastal Resiliency project.

In addition, this coming Friday another lawsuit pertaining to the park project will be heard in the same court. In that case, Tully, a contractor that sought the contract for the project to elevate the 60-acre East River Park by 8 feet to 10 feet, will argue that it should have rightfully won the bid. The only other bidder, IPC Resiliency Partners, allegedly is a cobbled-together entity — meaning two companies were joined together in order to meet the “experience” criteria for the contract.

“If Tully wins that case, the contract is void and they would have to rebid the project,” explained Tommy Loeb, a member of East River Park ACTION. “The bid [process] took a year the last time.”

Loeb said that, as the appeal goes on and the T.R.O. is in effect, the plan’s opponents still have allowed work to go on in one part of the park.

“We agreed to the sodding of the lawn where the compost yard used to be,” he said.

Village attorney Artuhr Schwartz, who is representing dozens of local plaintiffs in a community lawsuit seeking to stop E.S.C.R., said there was no decision on Monday that would affect the restraining order on contruction in the park.

“The court decides when they decide,” he said. “The stay stays until the panel rules.”

As for the Tully case, he said the argument is “that winning bid did not meet performance requirements and was cobbled together. They have to have a billion dollars of experience over the past number of years, a certain number of years — so they added another company,” he said. “We know that one of the companies that is part of this has a checkered history. Maybe one of them could be eliminated — that would void the contract.”

In addition, as previously reported by The Village Sun, Schwartz said he plans to file another lawsuit — hopefully on Tuesday — on the coastal-resiliency project. Like the Tully suit, it would focus on the contract for the East River Park work. Schwartz’s suit will argue that the de Blasio administration violated MWBE (Minority and Women Owned Business Enterprises) standards for city contracts by saying IPC only had to meet half of the usual MWBE contracting requirement, or 16 percent, as opposed to the usually required 32 percent.

“My case and the Tully case are very similar in a way,” the attorney said. “It’s all contracting rules.”

His other lawsuit, which is currently under appeal, is based on the principle of park “alienation.” That suit argues the $1.3 billion East River Park-raising scheme is, above all, a floodwall project and not a park project per se, so must first go through an “alienation” vote by the state Legislature to authorize the land’s removal from park use for the work.

“It’s a principle, common law, something that has existed for 120 years, the parameters of which are decided by a judge,” Schwartz said. “If there’s been 20 of these cases in the last 120 years, that’s a lot.”

The biggest alienation case to date was in 2000 and involved New York City’s effort to install a belowground filtration plant for drinking water — a nonpark purpose — in Van Cortlandt Park in the Bronx, he noted.

Similar to the proposed East River Park resiliency project, Schwartz noted the city had argued that, after it destroyed that section of Van Cortlandt Park to install the water-filtration plant, it would rebuild the park there.

New York State joined the plaintiffs, including Friends of Van Cortlandt Park, in arguing that the project constituted park alienation. The court found for the plaintiffs.