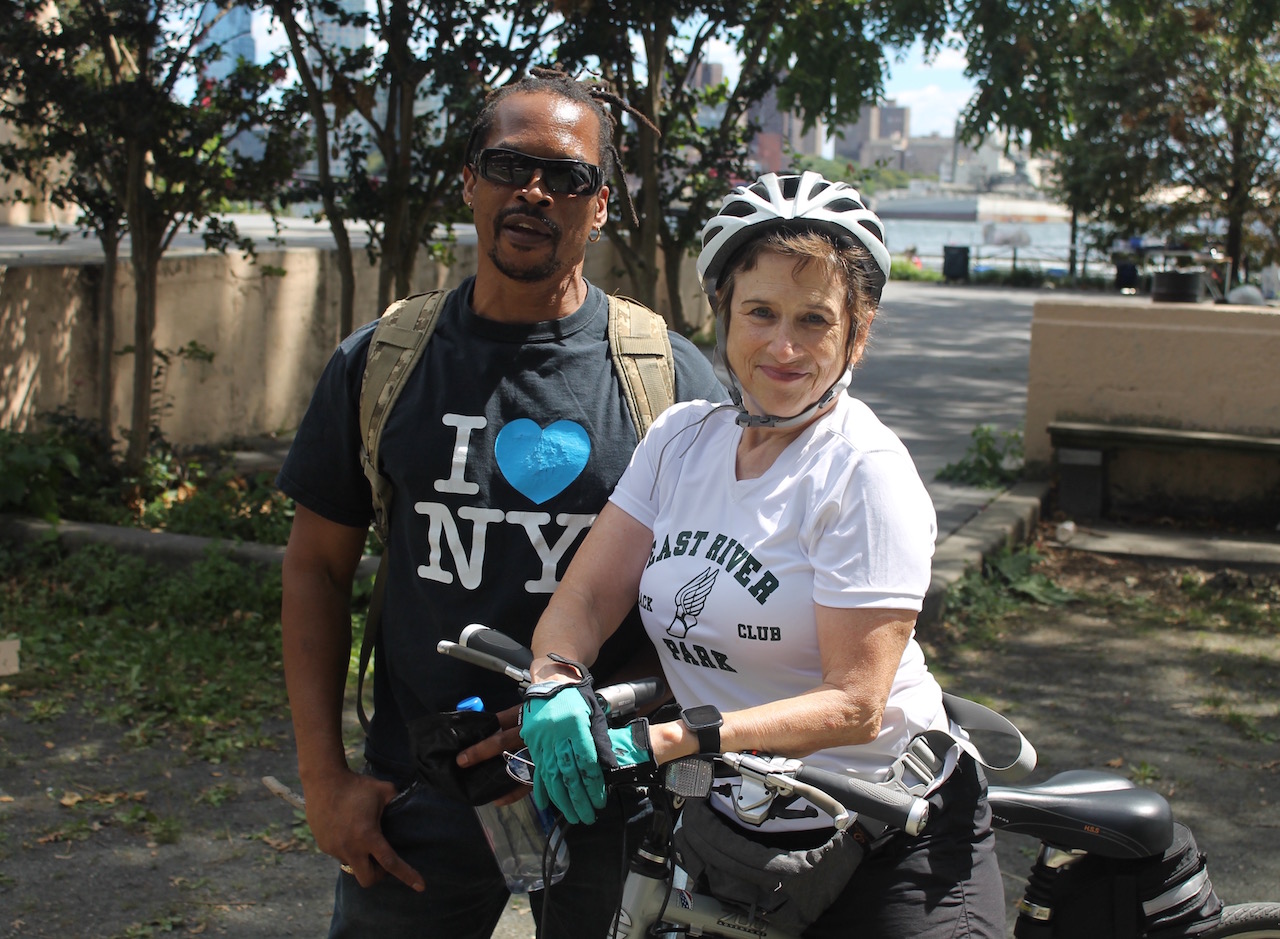 Artist Ian David Knife and Patricia Perlo are part of the group fighting to save the existing East River Park. Perlow trained for six marathons by running on the park's E. Sixth St. track. (Photo by The Village Sun)

BY THE VILLAGE SUN | It’s time to call in Cuomo to save East River Park.

Local public-housing residents need to get more involved in the cause.

And an all-out “art attack” could be the park’s best defense.

These were some of the strategies that opponents of the East Side Coastal Resiliency plan rolled out at a rally at the East River Park Amphitheater on Sunday morning.

The governor, of course, has famously intervened in city affairs before, from quashing a draconian shutdown of the L train, to closing the subways overnight to clear out the homeless during the pandemic, to urging the cleanup of the insane amount of graffiti left by Occupy City Hall.

Now local activists battling the de Blasio administration’s plan to bury East River Park under 1 million tons of dirt for flood protection are calling on Cuomo to put the breaks on what they say would be an environmental disaster.

The $1.45 billion plan, which would stretch from E. 23rd St. down to Montgomery St. on the Lower East Side, is set to start in November, according to Pat Arnow, chairperson of East River Park ACTION.

But the project’s foes back the original version of the plan, which did not call for raising the entire park by 8 to 9 feet, but simply for building an earthen berm along the east side of the F.D.R. Drive. Without notifying the community, though, the city scrapped that earlier low-impact plan and swapped in the current one.

“In November they’re planning to fence off 60 percent of the park,” Arnow told the crowd of about 100 at the amphitheater. “It’s going to be along the whole esplanade. The ball fields, tennis courts, the labyrinth, this area will be the only place that essentially will be open, and Pier 42 — that concrete slab surrounded by chain-link — that’s the part that we get to keep.”

She said that only 40 of the park’s trees would be saved while nearly 1,000 would be felled.

According to a recent presentation to Community Board 3, scheduled to remain open in phase one are two softball fields, one mini soccer field, 12 tennis courts, 2.5 basketball courts and two volleyball courts.

Because the funding for the mega-project comes from New York City and the federal government, the opponents had not reached out to the governor. But now, with the start of construction looming, they feel they have no other choice.

The antis hope they can delay the project long enough, “so we can get a new mayor who will be better for East River Park,” Arnow said, to applause.

De Blasio will be term-limited out of office at the end of next year.

There were cards addressed to Cuomo that were available for attendees to fill out. People can also write to Cuomo, asking him to keep 100 percent of the park open, through his official government contact form.

“Look around you, to your left and your right,” he told the crowd. “There’s no color. We need to activate the people in the projects. Make them feel that they’re welcome and we will have a bigger army.”

Other park activists, however, said tenant association leaders for the New York City Housing Authority developments bordering the park have convinced their tenants to back the city’s plan.

Knife also pitched his plan for an “art attack” on the park, which would use the Visual Artists Right Act of 1990 in hopes of delaying the resiliency project for a year or more. Renowned creators would be enlisted in the effort.

“We need to invite artists who are world famous and live in our neighborhood,” he said, mentioning Tom Otterness, among others.

“He’s a friend of mine — a lot of you don’t like my friend,” he said of Otterness. “But that man’s got weight.”

He was likely referring to the dog-shooting “art piece” that continues to dog Otterness.

Afterward, Knife said he didn’t want too much about the art strategy to be reported in the press for fear the authorities would try to block it from happening.

He’s currently invoking VARA in a dispute with August Laura on Avenue A after his crocodile-head tree-stump carving was painted green by the eatery without his consent.

Another speaker pitched an in-your-face approach.

“Let’s get some clowns for the park wearing sandwich boards,” a female artist urged the activists. “Wear a freakin’ sandwich board with a QR code about how this park is about to be destroyed!”

The informational campaign is needed, she said, since many of the park’s users come from outside the neighborhood and are unaware of the city’s drastic plan.

“There are people who use the park all the time, jogging, biking, from Uptown, from the Wall St. area,” she said. “They don’t have a clue what’s going on.”

On the legal front, Village attorney Arthur Schwartz recently filed an appeal in the community lawsuit against the E.S.C.R. project. On Aug. 20, the opponents lost at the State Supreme Court level.

Elizabeth Ruf Maldonado noted she has lived in the neighborhood since 1979 and uses East River Park daily. She recalled how she used to run around the amphitheater every day when it was run-down and graffiti covered, as if trying to work some “spell” to bring it back to life.

“I come to the park,” she said. “I smell the barbecues. I see the park used by a lot of residents of the [public] housing. It’s not either flood protection or the park. We’ve got to do them together.”

“They renovated it but it’s kind of stale,” one woman said of the West Side waterfront park. “So I come here.”

“They turned it into a sterilized shopping mall, and we can’t let that happen here,” a man who gave his name as Sam said of Hudson River Park.

“This is tree murder,” he said of the E.S.C.R. plan. “The city is having a fiscal crisis — they want to do this before the money is gone.”

Carolyn Ratcliffe, a member of Community Board 3, said losing all the park’s greenery would have serious health consequences.

“When they take those trees away,” she said, “we are going to suffer. We have a high degree of asthma.”

One woman, sporting a Gem Spa T-shirt and neon-orange sneakers, who did not give her name said she had been living in the area since 1981.

“We need to remind Carlina Rivera every day that she voted for this,” she said, “and you’re mad and you’re pissed off, and that she’s not representing you.”

“Carlina Rivera…she sold us out,” Arnow chimed in.

Arnow and others also evoked — and identified with — the history of the amphitheater’s location, Corlears Hook.

“We are on Lenape land,” she said, referring to Manhattan’s original inhabitants. “It’s a parallel of what happened to the Lenape. We’re fighting a parallel fight all these many generations later.”

In the same vein, local vocal gymnast Zero Boy said that Corlears Hook in February 1640 was one site of the Massacre of the Lenape.

“This is the war that was the template for the rest of what happened in the United States,” he noted.

People using the park nearby offered their thoughts on the debate.

Connie Sigman, from Astoria, was doing Filipino stick-fighting forms on a bluff just south of the rally. She said normally they hold their classes in a Westchester church but can’t do that now due to COVID-19, so are using East River Park since their instructor lives nearby.

Sigman noted she also had heavily used the park’s esplanade when she was training for a 60-mile breast cancer walk.

“What’s great for me is to have uninterrupted miles to walk — and restrooms,” she said of the East River Park esplanade.

On a lawn closer to the river, Shaquita Garcia was setting up for her son’s third birthday party. She disagreed with postponing the resiliency project.

“We love coming to the park, but it needs work,” she said. “Definitely, we’ll support them doing more work.”

Holding a cookout near the Fire Boat House, Lydia Sotomayor proudly said she has lived in the community for 60 years. She was skeptical the park-raising project would be done on time.

“I feel like, if you take this out, where are the kids going to go?” she asked. “In the neighborhood, they’re redoing a lot of the parks and it takes years.”

Her friend Joyce Lan-Eddy was more supportive of the city’s scheme.

“I have mixed feelings,” she said. “If it’s in stages, that would work.”