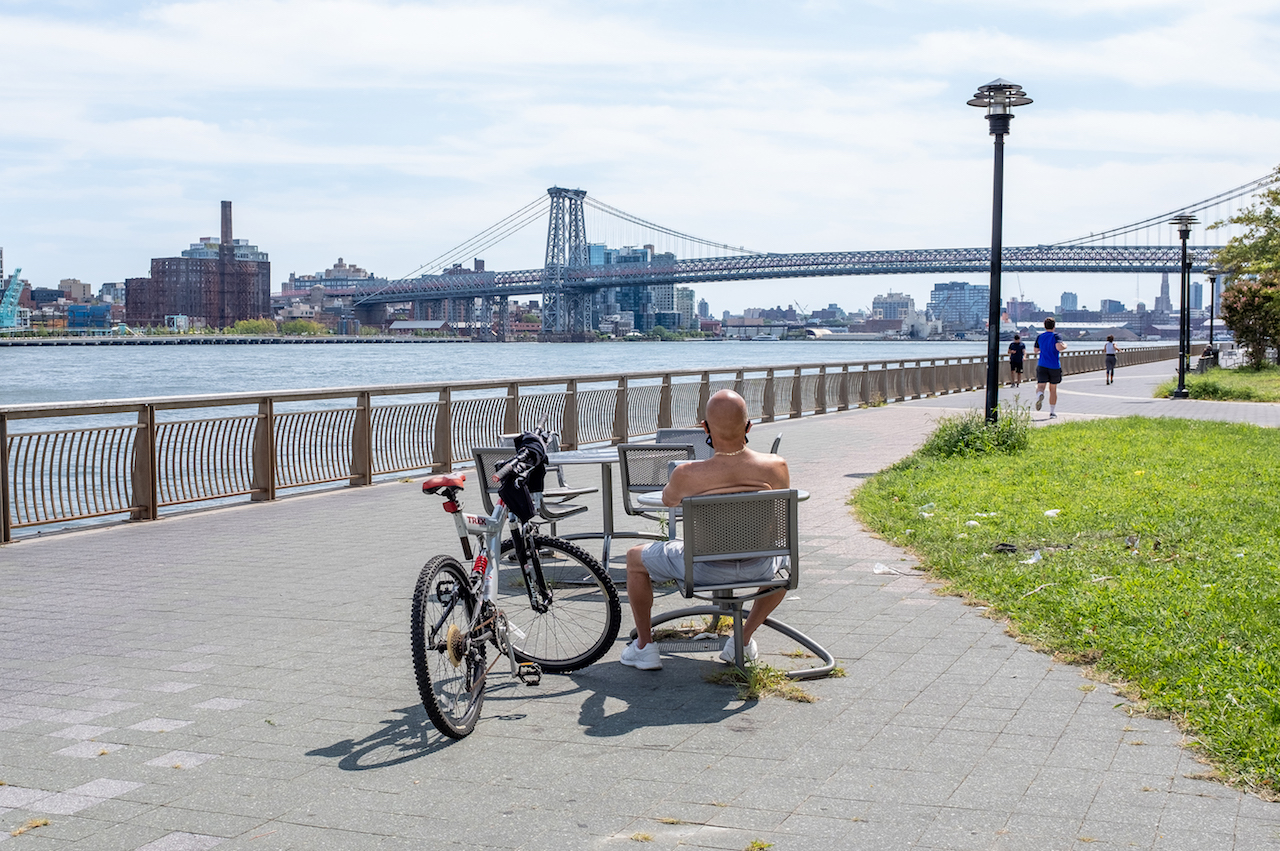 Relaxing and enjoying the view in East River Park. (Photo by Milo Hess)

BY THE VILLAGE SUN | The clock is ticking on East River Park.

Following a State Supreme Court justice’s ruling on Aug. 20 that the East Side Coastal Resiliency project can go forward, the path is clear for the city to start burying the beloved waterfront oasis under an avalanche of dirt.

Under E.S.C.R., 8 to 9 feet of new soil would be piled on top of the 58-acre park to raise it above the floodplain. All of the park’s foliage, including nearly 1,000 trees, plus all of its existing infrastructure — like the running track, ball fields and fire boat house — would be destroyed.

The mega-project could take five years or more to complete.

But community opponents aren’t rolling over just yet. On Friday, their attorney, Village District Leader Arthur Schwartz, filed a notice of appeal for the court at the next higher level, the Appellate Division. This way, if the city suddenly moves to raze the park, the opponents can quickly go to court and seek an injunction to stop the work.

The plaintiffs include nearly 20 groups, ranging from East River Park ACTION and the Orchard St. Block Association to New York Climate Action Group and the 4th St. Food Co-op, plus around 70 individuals.

Meanwhile, amid the year of the pandemic, locals continue to flock to the precious riverfront open space to exercise, relax, socialize safely, walk dogs and more.

When the city might start work isn’t clear. Attorney Schwartz said the city has said, “Not before September.”

The de Blasio administration has not issued any contracts for the work yet, though that could happen quickly. Funding has been allocated for the $1.45 billion project.

The park activist noted that the mayor and schools chancellor recently announced they are encouraging schools to use outdoor space for classes during the pandemic — which makes the push to demolish East River Park right now even more puzzling.

“You’re going to lose all those acres of potential schoolrooms?” Krezell asked incredulously. “The schools are asking to have class in the gardens and open space. The Department of Education is looking for open space. East River Park is perfect for classes.”

Krezell is also president of Loisaida United Neighborhood Gardens a.k.a. LUNGS. He noted that, right now, the city’s Greenthumb gardens are only open for members to work in them, not for events.

LUNGS is hoping to hold its annual Harvest Festival in late September / early October, but right now, it’s not even clear how they’ll do that.

In general, the prospect of losing use of East River Park and seeing it razed is hard to fathom for the E.S.C.R. project’s opponents.

“That’s a big loss to the community,” he said. “It’s very disheartening. Barbecues, birthday parties for families — it’s invaluable, how much stuff is done in that park — even the guys working out at the [chin-up] bars.”

Governor Cuomo has O.K.’d gyms reopening, but only at limited capacity, so those pull-up bars are more needed than ever right now.

The mayor also recently announced that the city will issue permits for Little League games, which can start Sept. 15, meaning East River Park’s ball fields could be put back into use — though they would need to have their seriously overgrown grass cut.

In a grudging concession to the open-space-starved East Village and Lower East Side community, the city has said it would close East River Park in phases, always leaving some of it open for public use.

As of now, according to Krezell, it appears that in phase one, the E. Sixth St. bridge over the F.D.R. Drive — which connects to the running track — would be closed while the E. 10th St. bridge would remain open.

“The plans keep changing,” he said.

For its part, the city says if the park is not raised, then by the year 2100 it would be flooded twice daily at high tide due to rising sea levels. The city also claims it wants to replant the park with hardier foliage more resistant to saltwater, salt spray and strong river winds.