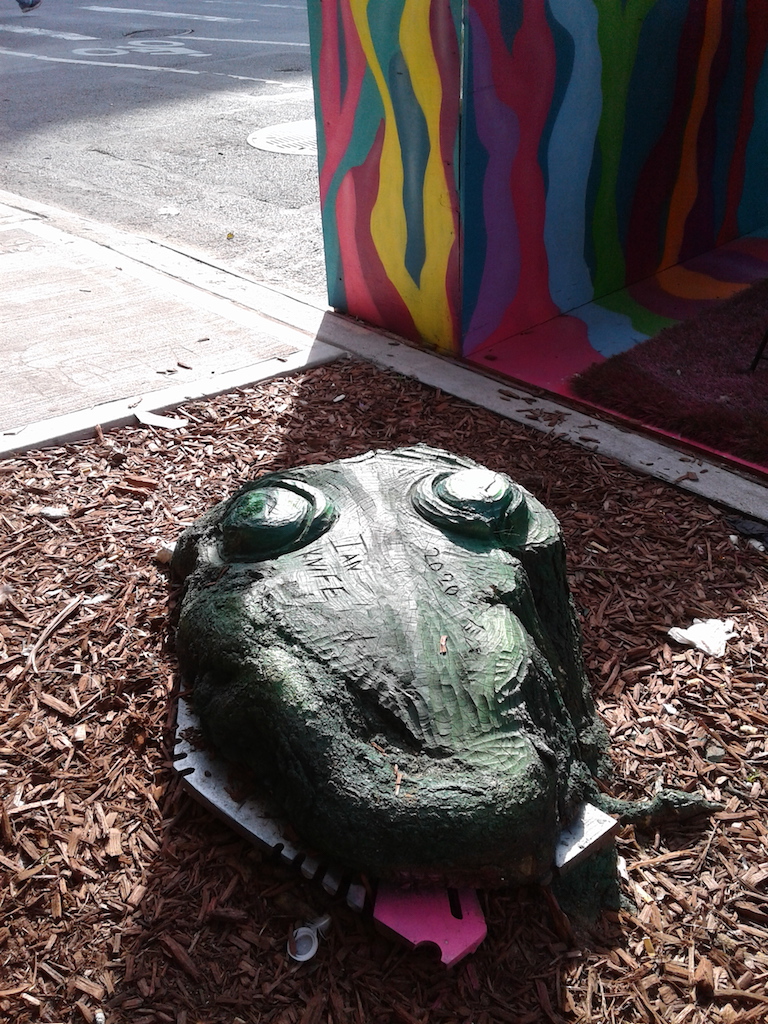 Tree-pit travesty: Artist Ian David Knife is furious that his crocodile-head carving on Avenue A was painted without his permission. (Photo by The Village Sun)

BY LINCOLN ANDERSON | Updated Thurs., Aug. 27, 1:40 p.m.: A tree-pit rumble in the East Village is pitting a local wood carver against a restaurant.

At the root of the sidewalk scuffle is a stump. Not just any old stump, but one fashioned into a crocodile head. The problem is the pavement art piece has been painted green, with a pink tongue — and that has the artist seeing red.

Ian David Knife painstakingly carved the stump into the reptilian resemblance this past winter. A native of Zimbabwe, he has lived in Stuyvesant Town the past three years, after prior stints in Denver and Taos. He has been carving stumps for 37 years, with nine others he has done around Alphabet City, plus seven in Brooklyn — around the Brooklyn Museum of Art and Grand Army Plaza.

Despite his name, Knife doesn’t just use a blade to make his carvings, but also chisels, a hammer, chainsaw or, as he put it, “pretty much whatever it takes.”

Recently, however, amid the ongoing COVID pandemic, the new restaurant August Laura, on Avenue A at E. Sixth St., commissioned some artists to paint its outdoor dining platform — which is right next to Knife’s croc creation — in festive tutti-frutti colors. In the process, the stump art got “spruced up,” too, with a wash of green paint.

“I was born in Zimbabwe and I know crocodiles are not green,” Knife said, indignantly, noting that the predators are nearly black. “And I would never have put a tongue on it. For this lady to go and paint my sculpture — it has my name, she could have found me online. I’m not hiding — for someone not even to Google me.”

To cut to the chase, as Knife explained it, the piece is supposed to be natural looking, subtle.

Also, beyond the color scheme, the way the croco-stump has been painted is not even anatomically correct, he noted.

“Never in history has a crocodile had a tongue like that,” the artist fumed.

It’s true, crocodiles’ tongues are attached to the roof of their snouts, so that they don’t bite them off.

What now looks like a tongue on the stump was actually a piece of grating in the tree pit that the former tree grew around. When Knife initially saw that, it made him think of a crocodile chomping down on something.

“She vandalized my work,” Knife lamented. “You just feel violated.

“For me, it’s a very spiritual process,” he said of how he carves stumps. “I like to connect with it, ask the tree what it wants to be. … There will never be another crocodile.”

Viewers can connect with the stumps, too.

Meanwhile, “the lady” that Knife referred to, Alyssa Sartor, who is an owner of August Laura, tells a different story.

“I completely understand,” she said of Knife’s objection. “And, honestly, we didn’t do it with any malintent [sic].”

She said that they hired a “street artist” to beautify the outdoor seating structure, but she didn’t want to divulge the artist’s name, for safety reasons.

She said passersby had often suggested brightening up the stump.

“People kept walking by saying we should paint that,” she said. “They’d say, ‘That is really cool but if it was painted, it will be even better.’

“Honestly, we thought we were enhancing it,” she said of pumping up the stump’s color. “We didn’t know anything about him. The tree stump is on our property.”

Technically the tree pit and stump are public property, though, albeit right in front of the eatery.

More to the point, however, Sartor said, Knife’s response to the situation was what was off-putting.

“He made threats on social media about killing us and going to jail,” she said, bluntly. “He basically said, ‘I will kill the person who did this and I don’t care if I go to jail.’

“I feel bad he’s so upset about it,” she said, “but I don’t take well to murderous threats.”

She shared screenshots of some of the posts with The Village Sun.

She said she saw Knife’s Instagram posts on the morning of Sat., Aug. 15, and rushed right over from her West Village to the restaurant. There she found Knife accompanied by a diminutive sidekick.

“He had a small child filming us the whole time on the camera — he had a karate uniform on,” she said.

The boy was the son of an artist friend of his.

“He was holding the camera, filming the whole thing,” Knife said. “I was professional about it.”

“He wasn’t making [physical] threats when he came,” Sartor noted of the stump artist, though adding, “He was making legal threats.”

After she arrived, the standoff lasted about 10 minutes, and ended with Sartor telling Knife, fine, go get a lawyer and have him or her send Sartor the paperwork.

Knife then called police to the scene, she said. When the cops arrived, he explained to them that, under the federal Visual Artists Rights Act of 1990, the stump art is protected. (Mainly, if anyone wants to remove a piece of public artwork, the artist must be given 90 days prior notification, so that he or she has time to remove it personally.)

During the Avenue A face-off, Knife also referenced 5 Pointz, in Long Island City, where an owner allowed an old factory to be covered with graffiti murals, but abruptly whitewashed the artwork in 2013, then demolished the building the next year. Ultimately, a judge ordered the owner to pay $6.7 million total in damages to 21 of the graffiti artists.

But Sartor doesn’t see the similarity.

“He’s talking about 5 Pointz and that’s an entirely different case,” she scoffed.

She said Knife sent an e-mail to the restaurant’s inbox claiming the stump was worth $17,000. He subsequently told The Village Sun it was worth $25,000.

August Laura only opened last October, not too long before the pandemic hit, and is now simply trying to survive, she said. The cuisine is American with an Italian influence.

The location, of course, was formerly home to Sidewalk, the popular restaurant and performance venue. Asked if August Laura, following in Sidewalk’s tradition, would have music, Sartor said, “That’s something we were working on. In the future, if we ever get indoor dining again, we will revisit that element.”

Asked where things stand now — if the restaurant would work with Knife to restore the stump to its former natural look — she said, it depends.

“If he had approached us differently, for sure,” she said. “It goes back to the original death threats. Now I’m not inclined to be so accommodating. If he comes back and asks politely and walks us through it, we’d be willing to work with him.

“We’re a small business trying to get through COVID,” she stressed.

But Knife downplayed his outraged posts, and stressed he didn’t call out Sartor or anyone else directly by name.

“I didn’t post anything that was threatening her,” he countered. “I just told the truth — that she damaged my artwork. I’m a professional about this, I’m not going around threatening business owners.

“Initially, I thought it was a street kid tagging my pieces,” he said.

After a week, though, he found out from friends in Tompkins Square Park that it was the restaurant that had doctored the croc. Then, he said, “I tagged them on every post,” referring to August Laura, which was how it caught Sartor’s attention.

Knife’s Instagram friends expressed support, though one woman, seeing the tone of his posts about the crocodile coloration, urged him, “Stay cool.”

In short, the color-added amphibian is making him look bad, hurting his reputation as long as it’s out there, in his view.

“She’s doing me damage every single day,” he accused of the restaurateur. “Now she’s trying to flip the switch and make me the bad guy. She needs to just fess up — she messed up the artwork. We got to get it back to a natural piece of wood.

“I’m the victim,” he declared. “My crocodile is still sitting in the street, green — with a tongue. It looks like Kermit from ‘The Muppet Show.’

“It took me seven days to do it in the middle of winter,” he said of the crocodile carving. “I was kneeling on dog poop.

“This is my life,” he said. “This is how I make money to send back to people in Africa. I’ve got 15 people who depend on me.”

In fact, he said, August Laura should make amends to him, not the other way around.

“I think they need to apologize to me a bit better,” he said. “The responsibility’s definitely hers.”

He also accused the restaurant of “white supremacy” and said they’re trying to make him look like “an angry black man.”

Asked who should restore the stump, him or the eatery, he said he would do it, but that August Laura would need to pay him $5,000 for the supplies and labor.

“Paint can get into the wood, so it may need to be carved out, with loosing the bark or the design, and I won’t approve of anyone to mess with it any further,” he warned.

If they refuse to pony up the five grand, he said, he would then sue them for the stump’s full value of $25,000.

Knife said August Laura must also pay for a “full-page apology” in The Village Sun for the stump-painting snafu and explain why doing it was wrong.

Told that Knife claims he wasn’t threatening her or anyone else at the restaurant, Sartor said, in exasperation, “This can be a game of my word versus his but I really don’t want any part of that. I’m a small business owner just trying to survive COVID.”

She did not say whether they would pay Knife $5,000 to restore the stump to its natural wood look.

In a related story, Knife now has his eye on a large tree trunk that was left in Tompkins Square Park’s southeast corner after Tropical Storm Isaias broke off the tree’s top. He hopes to carve it into a giant saxophone, with all its keys, with a bird on top, in honor of jazz legend Charlie Parker a.k.a. Bird, who lived across from the park on Avenue B.

Knife said he has gotten the O.K. from the park’s manager to do the carving. The trunk was recently trimmed down a bit — at his request, the artist said — but is still tall.

“I asked them to cut off the rot but the stump is now mine to carve,” Knife said.

However, a Parks Department spokesperson played a different tune on the artist’s ambitions on the stupendous stump. Basically, although Knife did reach out to the park’s supervisor, the plan was not O.K.’d by the department.

“The shaft of this storm-damaged tree will be removed as it presents a potential danger to park patrons,” the spokesperson said. “We discourage the artist from carving the trunk due to safety concerns.”