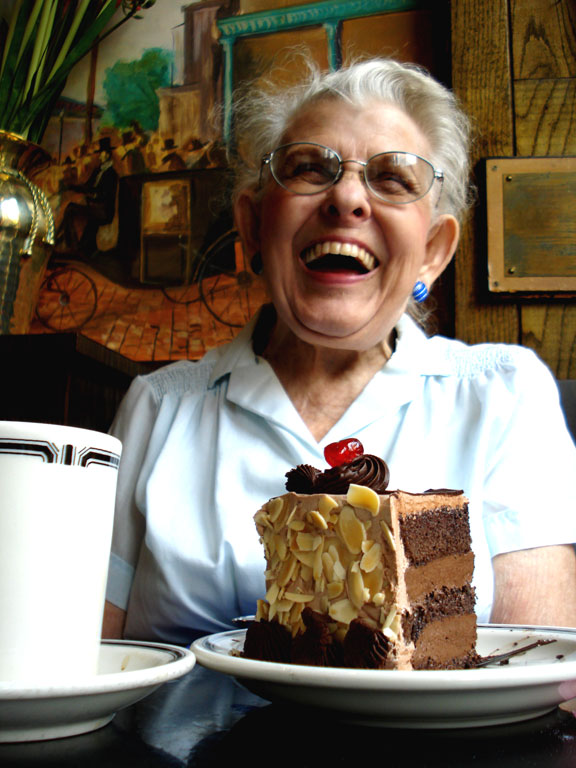 BY LINCOLN ANDERSON | Updated Fri., Sept. 17, 11:30 p.m.: Doris Diether, the iconic Community Board 2 member who was an ally of Jane Jacobs, died at her home of more than 60 years on Waverly Place on Thursday. She was 92.

Diether had returned home from the hospital last Friday after being put on hospice. The longtime Greenwich Village activist had received care at Mt. Sinai West Hospital, at 59th St. and 10th Ave., for two weeks.

“Doris was an integral part of the very fabric of this community,” she said. “She was the gold thread in a crazy quilt that is Greenwich Village. It’s the end of an era. A beautiful, magical chapter of Greenwich Village history has ended.”

A week earlier, Diether had been lucid and was eager to return home from the hospital, though she was in rapid physical decline.

“She’s alert. She’s with it. Her mind is sharp,” Woolums said at the time. “She wants to be with her cats.”

Micah Bucey, a minister at Judson Memorial Church, where Diether was a congregant, announced that plans for a memorial “will soon be underway.”

“So many of us have been touched by Doris’s long, fiercely active life,” Bucey said. “And I know that there will be many stories shared for a long time to come.”

David Amram, who is headlining The Village Trip festival’s “kickoff concert” at Eighth and MacDougal Sts. this Sat., Sept. 18, from 1 p.m. to 6 p.m., will do a special tribute to Diether at 3:15 p.m.

Tributes from local politicians and colleagues quickly rolled in as news of Diether’s passing spread.

State Senator Brad Hoylman became close to the senior Village activist when he served on Community Board 2, which, at one point, he chaired.

“Doris was a Greenwich Village original, our generation’s version of Jane Jacobs,” Hoylman said. “I served with her for a decade on Community Board 2, so most of what I know about zoning, I learned alongside Doris.

“She was a tough cookie. It was entertaining to witness Doris methodically pick apart the arguments of developers and their lawyers at zoning and landmarks meetings. I suppose as an older woman, Doris was routinely underestimated by them, but not for long!

“Most of all, Doris was kind,” Hoylman said. “Kind to my family, neighbors, cats, wild animals, and the countless friends she made in Washington Square Park. I don’t think she ever missed sending me a birthday or Valentine’s Day card. And for the added hometown touch, she always included a typewritten recipe, whether it be for meatloaf or tuna casserole.

“I’ll miss Doris so much, and I know many others will, too. Rest in Power, Doris.”

“Doris was a vintage Village fighter,” she said. “She fought with a background of knowledge and detailed information to push back on dangerous and damaging proposals. And she just had a great spirit of complete love and dedication to the community.

“She took generations of Villagers on a journey when it came to understanding zoning text — which is very dense and hard to comprehend — and Doris made it understandable and armed people with the ability to fight for their community.

“To say she’ll be missed,” Glick said, “it’s just a gaping hole in our community’s institutional memory and knowledge. Doris loved parties, animals and our very precious community. She had a zest for life, she lived it to the fullest. But it’s always very sad when someone who has been so integral to the community passes away. They can’t be replaced.

“Doris joins the towering figures of Village involvement — Ruth Wittenberg, Jane Jacobs, Verna Small, Bill Bowser and so many others that worked tirelessly to preserve a unique corner of the world.”

City Comptroller Scott Stringer got to know Diether when he was borough president. The office carries the role of appointing — or, in Diether’s case, reappointing — the volunteer community board members to two-year terms.

“New York City has lost a living legend,” Stringer said. “Activist, zoning maven and giant slayer — Doris Deither worked for decades to preserve and protect her beloved Greenwich Village. As Manhattan borough president I was fortunate enough to work alongside Doris and learned so much from her when she served on Community Board 2. Thanks to her relentless organizing and advocacy, we can all enjoy the beauty and history of the area to this day. Her wisdom, humor and dedication to her community will be sorely missed, and I mourn her loss together with her extended network of friends, neighbors and fellow activists.”

A few years ago, New York City voters, in a referendum, backed term limits for community board members. Diether said she opposed the idea, arguing that veteran members bring valuable institutional knowledge to the table from their years serving on the board.

“While I am heartbroken to learn of Doris Diether’s passing, the impacts of her activism and love for our community will live on,” he said. “I’m sending my prayers to the Greenwich Village community and all who loved her. I will miss her so much.”

“We were allies in the effort to make meetings more amicable,” he said. “She and Ed Gold were two sources of so, so much knowledge and history. I will miss them both.”

Just eight months or so ago, Diether appeared to be in pretty good health as she was rehabbing at VillageCare on West Houston St. after a fall. Her friends threw her a socially distanced birthday party — Diether smiled through a window from inside the facility as her friends celebrated and wished her well from outside on the street.

Around 1950, as a young woman in her mid-20s, Diether moved back to New York City for a job and settled in at the Hotel Albert, at University Place and 10th Street. Talking to the New York Public Library History Project, she recounted how her blue-blood father found it a shocking place when he came to visit her one morning: A woman propositioned him for sex in return for a bottle of liquor and two men in the elevator were making out.

In the early 1960s, Diether, along with Jacobs, was part of a team of staunch Village residents that battled Robert Moses’s “slum clearance” redevelopment plans for the area. As part of the effort, Jacobs, Diether and other activists, including Verna Small and Ruth Wittenberg, were each responsible for keeping watch over a “sector” of the Village to make sure no sudden demolitions of buildings started within the proposed 14-block “urban renewal” zone. Diether’s watch was the Central Village. They were part of a larger group of hundreds called the Committee to Save the West Village.

In 1958, she married Jack Diether, a music critic and writer, a specialist in the music of Gustav Mahler and Anton Bruckner, and moved into his Waverly Place basement apartment. Diether wrote dance reviews for the local weekly newspaper The Villager and her husband wrote music reviews for it. Up until around 2000, Diether would drop by the paper’s office once a week and touch base with the staff on what was going on in the neighborhood. Jack Diether died in 1987.

John W. Sutter, the publisher of The Villager from 1999 to 2012, praised both Diether’s zoning prowess and infectious enthusiasm.

“Doris, Doris, how many times have people mentioned ‘legend’?” he reflected. “Sixty years of working to preserve the Village and make it a better place. Her mastery of New York City zoning regulations made her a formidable opponent to developers pushing the envelope. Doris was also The Villager’s dance writer and sometimes critic for many years. What truly inspired me about Doris was how she took such delight in the things that she did. It was infectious and it was so much fun to work with her and talk about all of the colorful characters in our midst.”

Diether became a self-taught specialist in zoning and land use, earning the moniker of the community board’s “zoning maven.” An outspoken board member, she never hesitated to speak up at meetings about issues she found with proposed zoning changes or building projects — or discrepancies in the language of board resolutions.

For her years of work on C.B. 2 and independently on land-use and zoning issues, some dubbed her the “grande dame” of New York City land use.

As she became older and less steady on her feet, fellow board members, like Jonathan Geballe and Brian Pape, would help walk her home from C.B. 2 meetings. Former Village District Leader Keen Berger would help walk Diether to church at Judson on Sundays.

Diether was a rare Republican in Greenwich Village, identifying as a Rockefeller Republican. She liked to the tell the story of how, protesting against “lax rent-control laws,” while wearing high heels, she held a big pig on a leash outside Governor Rockefeller’s mansion. She said no one else wanted to hold the pig, so she just did it.

Diether was a constant presence in Washington Square Park, located just steps from her rear basement apartment. The longtime activist was spotted there by Brandon Stanton, who included her in his wildly popular first “Humans of New York” book, accompanied by Ricky Syers, who had made a marionette, “Little Doris,” of her. Syers would have the “Little Doris” marionette dance and cavort with another of his characters, a moonshine-swigging hillbilly named “Stix.”

Diether was famous for her annual Christmas cards, sending them to a list of hundreds. They always contained an inserted note with a recipe, such as for a tuna casserole.

In her later years, she also delighted in trying to nail phone scammers. She would patiently wait them out, collecting information on them over several phone calls, even trying to set up “stings” at her apartment where they would come to pick up an allegedly promised check. The stings never quite panned out — well, at least one nearly did — but she did sometimes pass the phone numbers and details on to the F.B.I.

Sean Sweeney, the director of the Soho Alliance and a former member of Community Board 2, recalled Diether as feisty yet “saintly.”

“Doris was never shy offering her opinion, often contrarian,” he said. “Most folk accepted that but a few took it personally and would try to undercut and undermine her on the community board in the most nasty manner. Yet, even if urged to give her reaction to their hostile behavior, Doris would not say anything negative about her attackers, merely shrugging off their malevolence with a ‘That’s life, what are you going to do’ attitude.

“Doris also never whined,” Sweeney added. “Despite declining health, she was always chipper, never seeking sympathy nor complaining or dwelling on her health issues. Considering this and how she devoted her life to her community and neighbors, Doris was rather quite saintly.”

Diether, in return, was the recipient of kindness from Erin Rogers and her husband, Scott Gropper, who “adopted” Diether after meeting her in Washington Square Park 16 years ago. The veteran activist would spend Thanksgiving with them. Eventually, Rogers became her healthcare proxy.

“We met her through the pigeons,” Gropper told The Village Sun. “We were hanging out with Paul — [who was the Pigeon Man] before Larry. We would just hang out and talk…fell in love. … Fell in love with Doris.”

Doris Diether is reportedly survived by a son-in-law, Anton, as well as some relatives in Finland whom she got to know in recent years.