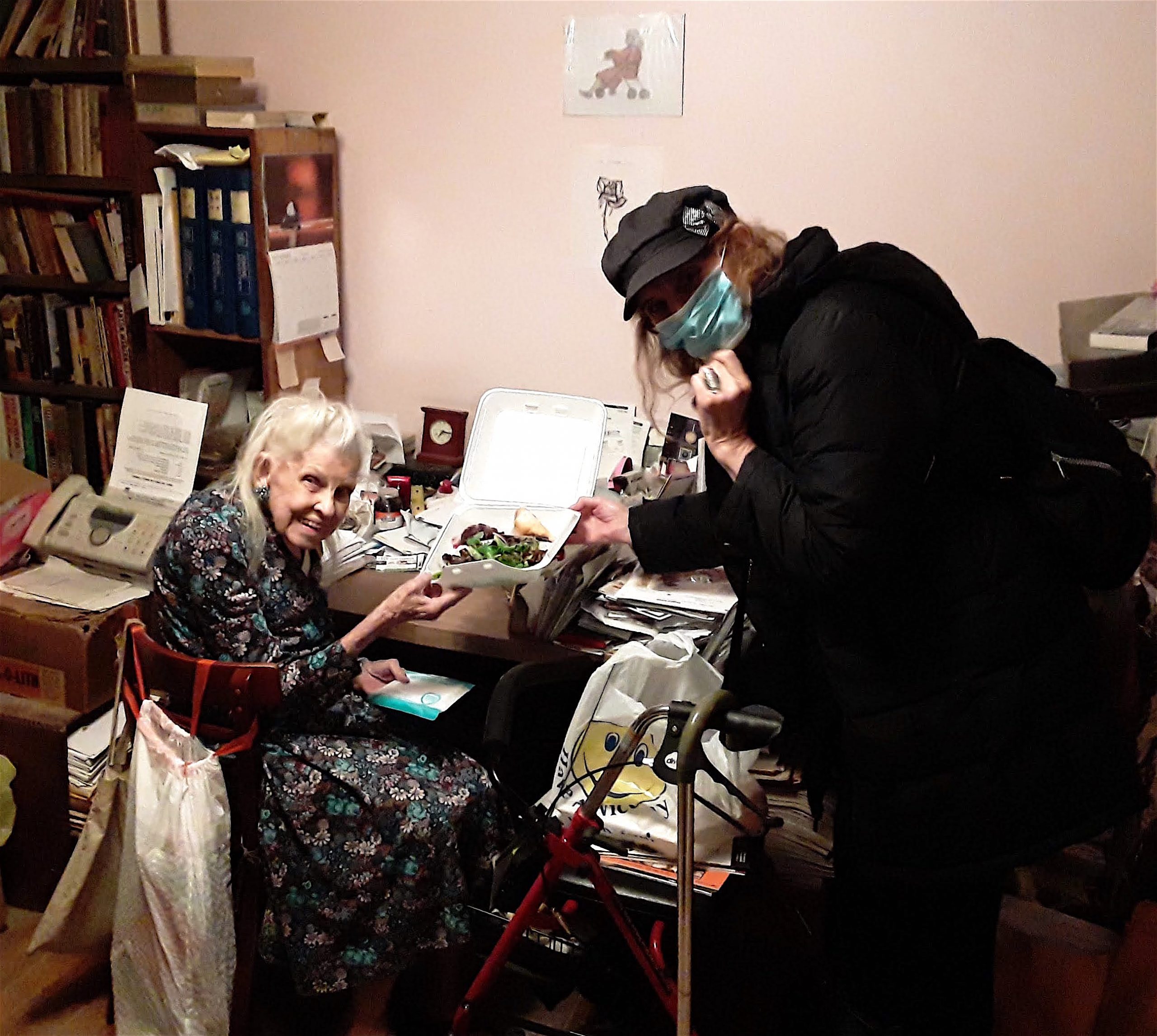 Thanksgiving with Doris Diether, who made a turkey out of Robert Moses

BY THE VILLAGE SUN | Like everything else, it wasn’t your typical Thanksgiving this year.

But some things don’t change, even during a pandemic — like the importance of showing kindness and helping out others.

Village activist Sharon Woolums stopped by veteran Community Board 2 member Doris Diether’s place on Thursday night to make sure she was doing O.K. and bring her a turkey dinner from Le Souk.

Le Souk restaurant, on LaGuardia Place, once again provided Thanksgiving meals for community members who might not have had other options. Past years have seen a festive holiday gathering inside the Egyptian-themed restaurant, with live music and revelry. Right now, of course, that wasn’t really an option, with only 25 percent indoor restaurant capacity being allowed.

Diether, who will turn 92 in January, is among the city’s longest-serving community board members.

Although she is a registered Republican, she did not vote for Trump earlier this month.

“I like Biden,” she said. “I never liked Trump — his polices, his attitude, everything.”

The longtime activist’s career stretches back to when she fought along with Jane Jacobs to defeat Robert Moses’s Village-destroying development and highway schemes; to be able to respond quickly to Moses’ threatened actions, the activists divided up the Village into sectors, with Diether in charge of one.

Her small rear apartment on Waverly Place is festooned with newspaper clippings about her from over the years and photos of her rubbing shoulders with city politicians.

Earlier during the health crisis, Diether was regularly engaged in one of her usual activities: playing cat-and-mouse with telephone scammers. One guy claimed he was going to give her $5.5. million — but, of course, she would have to give him some money upfront first, $1,000. Finally, after calling sporadically over a month, the guy said he was coming by her place.

Diether called The Village Sun back then, thinking it “would be a good story for the paper” to catch her effecting a bust. We couldn’t make it over to her place just at that moment, so she was thinking of calling state Senator Brad Hoylman. That would have been a heck of a crime-fighting combo; talk about “Starsky & Hutch 2.0.”

But, in a stroke of perfect timing, Bob Gormley, the district manager of C.B. 2, happened to drop by with some paperwork for her.

Ultimately, though, the scammer didn’t show up anyway.

Other times, she said, “They ask me for my Social Security. I tell them I can’t find the card. … I try to hold them on the line to get their information, but not give my information.”

You might be getting the sense that Diether’s strategy in these cases — when she isn’t just hanging up on the suckers — is to turn the tables on the shady scammers.

“I’m hoping that I get enough information that I can turn it over to the F.B.I.,” she explained.

One time a few years ago, she duped one of the clueless crooks to come by and bring the cash — but first she made sure to have five or six of her friends standing outside in the sidewalk stairwell outside her place.

“He started to get out of the car and he saw all the people and got back in the car and left,” Diether laughed.

On another note, though, she’s annoyed that she can’t currently order postage stamps over the phone. During the pandemic, the U.S. Postal service is not offering that service, instead telling people to order online.

But Diether is not too into tech, even though she does have a LinkedIn page touting her expertise on zoning and landmarking. She joins the C.B. 2 meetings by telephone not by computer screen.

Oh yes, and her two cats, April and Lucky, were around but they were hiding.

And, in some other Doris trivia, she’s no longer into watching men’s professional wrestling. Apparently, she has outgrown it.

Anyway, it was nice to drop by and say hello!