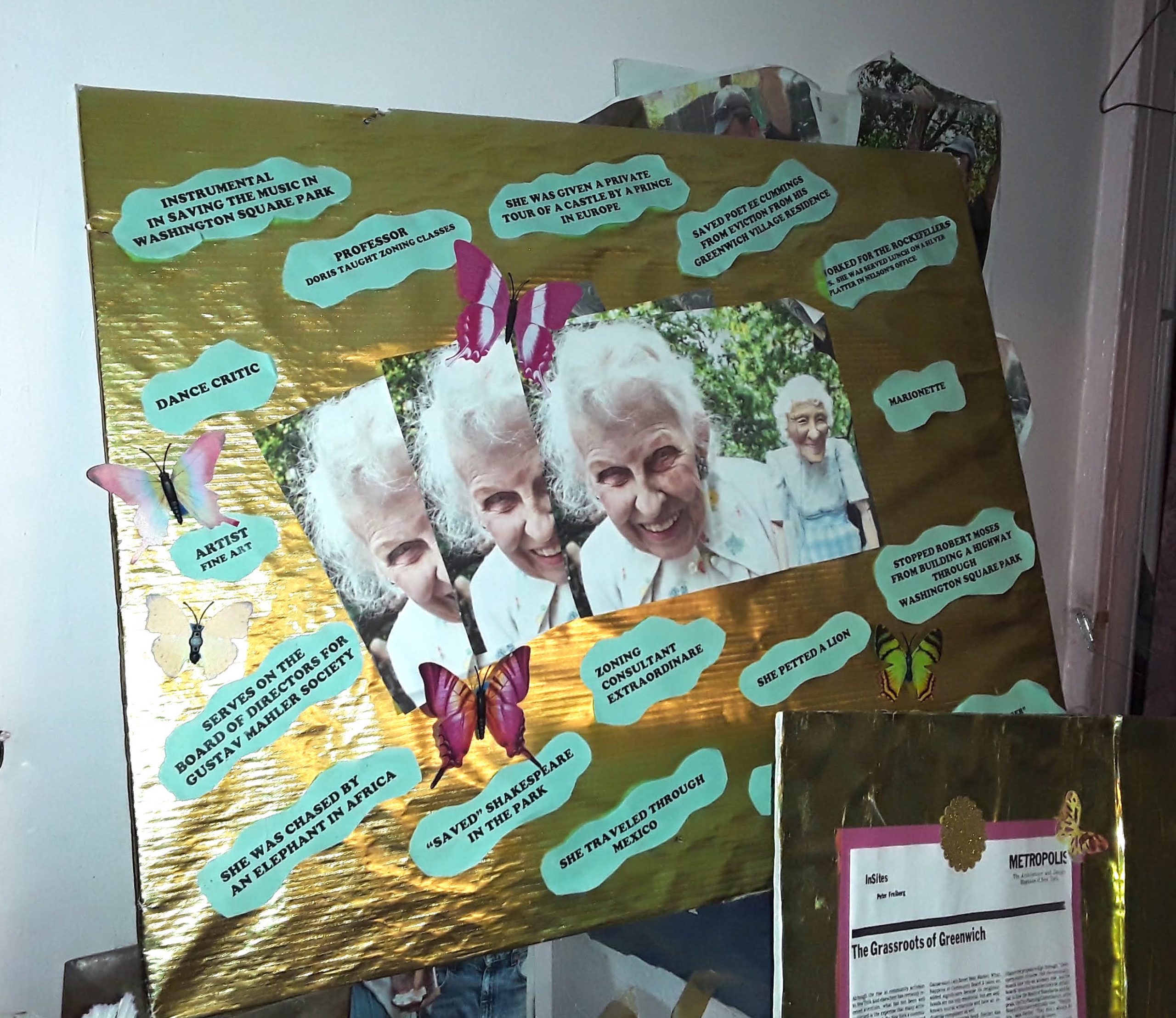 A jumbo-sized "card" from Doris Diether's big 90th birthday party at Judson Church, featuring a sampling of her many accomplishments over the years. To the right of her is the "Little Doris" marionette. (Photo by The Village Sun)

BY THE VILLAGE SUN | Updated Fri., Sept. 10, 4 p.m.: Doris Diether, the legendary Community Board 2 member who was an ally of Jane Jacobs, returned home from the hospital on Friday.

The Greenwich Village “zoning maven,” 92, had been receiving care at Mt. Sinai West Hospital, at 59th St. and 10th Ave. for the past two weeks.

Sharon Woolums, a friend and fellow activist, said Diether had wanted to return to her apartment just off of Washington Square Park.

“She’s alert. She’s with it. Her mind is sharp,” Woolums said, speaking on Thursday. “She wants to be with her cats.”

This past January, as Diether was rehabbing at VillageCare on West Houston St. after a fall, her friends threw her a socially distanced birthday party — Diether smiled through a window from inside the facility as her friends celebrated and wished her well from outside on the street.

In the early 1960s, Diether, along with Jacobs, was part of a team of staunch Village residents that battled Robert Moses’s “slum clearance” redevelopment plans for the area. Each member, most of them women, was responsible for keeping watch over a “sector” of the Village to make sure no demolition of buildings started within the proposed 14-block “urban renewal” zone. They were part of a larger group of hundreds, the Committee to Save the West Village.

Diether went on to become a specialist in zoning and an icon on C.B. 2. She even was included in the first “Humans of New York” book. She may be the longest-serving community board member in Manhattan and possibly in all of New York City.

Her friend Erin Rogers, who is Diether’s healthcare proxy, said friends should “continue to send positive thoughts” and cards, give Diether phone calls and, once she is set up with a tablet, FaceTime calls. Safe in-person visits are also being allowed.