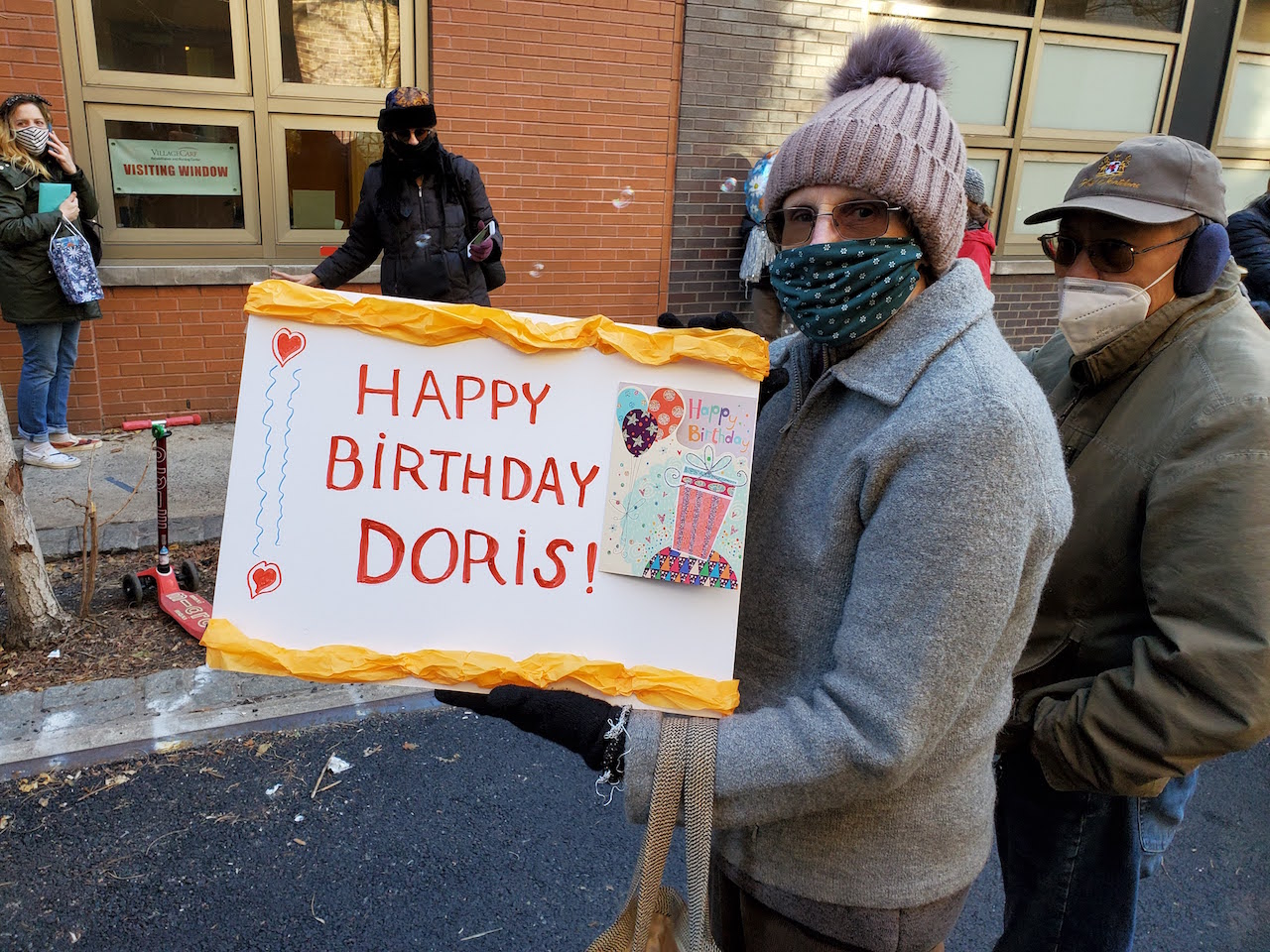 A friend with a birthday sign for Doris Diether outside the VillageCare W. Houston St. rehab center this past Sunday. (Photo by The Village Sun)

BY THE VILLAGE SUN | In the hardy spirit of Doris Diether, her friends didn’t let the pandemic keep them from throwing a birthday bash for the Greenwich Village icon last Sunday.

Diether, who turned 92, is currently in the VillageCare rehab facility on W. Houston St. after a recent fall at her Waverly Place home off Washington Square Park, where she has lived since 1958.

In treating her, doctors discovered two fractures, one in her hip and one in her lower back, that may have been around from before, plus an infection.

Since they could not go inside the facility to wish her happy birthday, the group gathered on Downing St. outside the rear of the VillageCare building. VillageCare arranged for Diether to be sitting inside behind a ground-floor window.

People held up birthday signs and waved at Diether through the glass. Wearing a crown with blinking lights, she smiled and waved back. Some communicated with her via a cell phone on speaker.

Those among the “Diether Day” who’s who were a contingent of C.B. 2 members, including board Chairperson Carter Booth, Keen Berger, Valerie De La Rosa and Kristin Shea, along with former board member Sean Sweeney, the director of the Soho Alliance. Bob Gormley, the board’s district manager, came by earlier and dropped off flowers.

There were also members from Judson Memorial Church, including Suzanne Dickerson, where Diether is a member. A group of others, like Helen Osgood, knew Diether from having met her in the park.

The pavement party was organized by Erin Rogers, who originally met Diether in the park 15 years ago.

“I said, ‘Doris can’t not have visitors on her birthday,'” she said. “They have a ‘Visiting Window.'”

Rogers is not only a friend but also has taken on the role of Diether’s healthcare proxy.

Diether was an only child. She has relatives but they are far away, in Finland. So she relies on the help of a group of locals.

As Rogers explained it, Diether fell the previous weekend and pushed her Life Alert button to summon an ambulance. After first being taken to Lenox Health Greenwich Village, she was transported to Bellevue Hospital, stayed there for a week, then was moved the day before her birthday to VillageCare to rehab.

Rogers believes Diether is the longest-serving community board member in Manhattan and also possibly in the whole city. The Downtown doyenne first arrived in the Village as a young woman.

“She came to the the city from Massachusetts at age 18 and lived in the Albert Hotel,” Rogers said. She noted that Diether’s father came to visit her and was scandalized to see gay men in the hotel.

Her husband, music critic Jack Diether, who she met in New York, died in 1987.

“He had a heart attack on the sidewalk,” Rogers said. “She saw it happen from across the street.”

Sharon Woolums, a public member of the C.B. 2 Parks Committee, was also among the crowd on Downing St., and would not have missed the birthday celebration.

“I was just so happy to see her in sparkles and flowers in her hair and smiling and beaming,” she said. “And it was just such a sweet occasion in the midst of all this turmoil of the week and the pandemic.”

By “turmoil of the week,” she was obviously referring to the crazy Capitol “coup” by berserk Trump supporters.

Although Diether actually is a rare Republican in the Village, she told The Village Sun this past Thanksgiving that she has never liked Trump.

Scott Gropper, Rogers’s husband, recalled how they first met Diether in the park.

“We basically adopted Doris,” he quipped. “She’s with us on Thanksgiving and holidays — not this holiday, though,” he said, referring to the pandemic and social-distancing concerns.

“We met her through the pigeons. We were hanging out with Paul — [who was the Pigeon Man] before Larry. We would just hang out and talk…fell in love. … Fell in love with Doris,” he said, with a laugh.