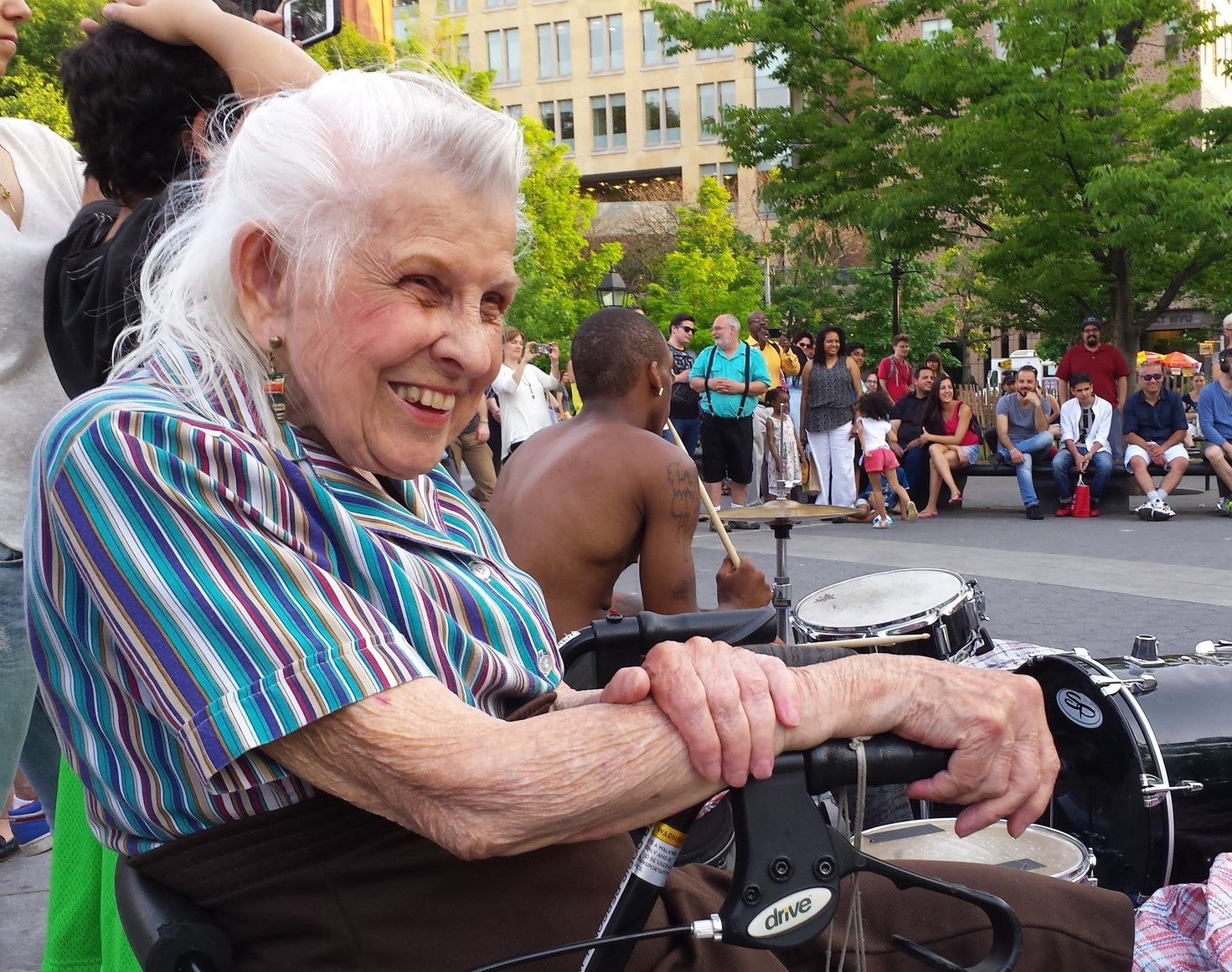 Doris Diether listening to a drummer as tumbling twins Tic and Tac performed in Washington Square Park. (Photo by The Village Sun)

BY THE VILLAGE SUN | Mark your calendars, Doris Diether fans!

The long-awaited dedication of a bench in Washington Square Park in the late zoning maven’s memory will happen Sat., Oct. 15, starting at 11 a.m. The event will be on the park’s west side, in the oval with the bust of engineer Alexander Lyman Holley.

The legendary activist died last September at age 92. Her memorial was held in the park the next month, drawing an outpouring of love from local politicians and preservationists to park buskers.

Lois Rakoff, one of the bench effort’s organizers, said it won’t be an elaborate ceremony.

“I just want to show that plaque and love Doris,” she said, “maybe put flowers on the bench.”

Park activist Sharon Woolums will sing a song she composed for her friend Diether, accompanied by a ukulele player. Also… “Bottchermania” might continue its run: Rakoff said Councilmember Erik Bottcher, who strummed guitar and sang Bob Dylan’s “Blowin’ in the Wind” at The Village Trip festival kickoff event last month, might also treat the crowd to a tune. There’s no word yet on what the song might be.

At the behest of the Washington Square Park Conservancy, the event will also involve flower planting to help beautify the park.

However, Rakoff does have larger visions of how to honor the late, longtime Community Board 2 member and comrade of Jane Jacobs in fighting Robert Moses’ “urban renewal” plans that would have deciminated the Village.

“I think there should be a statue of Doris in Washington Square Park — because there’s no females,” she said of the park’s male-dominated monument scene. “But that’s more money,” she conceded.

Rakoff said there are also hopes that an honorary co-naming street sign for Diether can be hung at Waverly Place and MacDougal Street, where the park-loving community activist lived for most of her adult life.