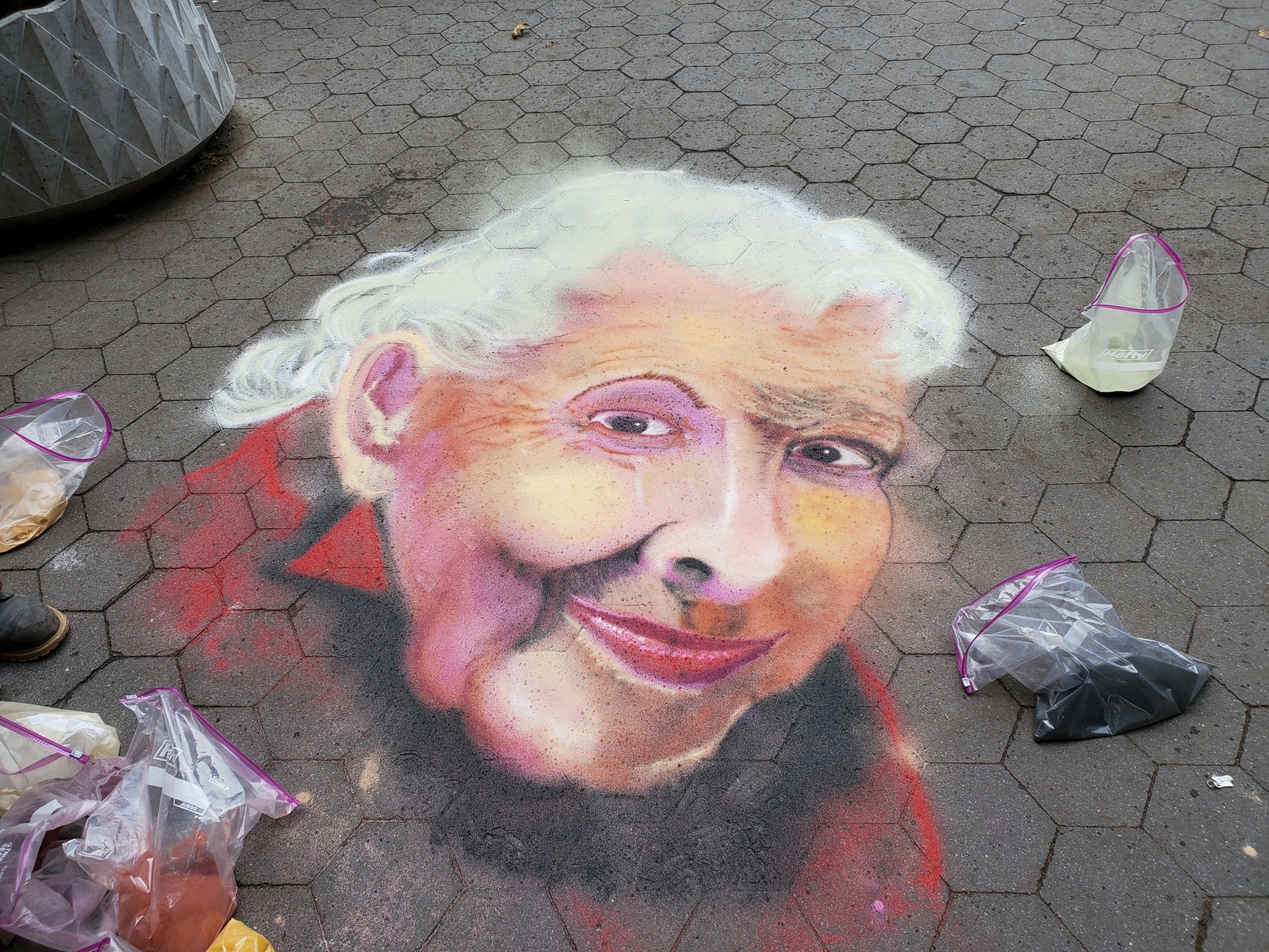 BY LINCOLN ANDERSON | With politicians’ praise, friends’ fond memories, park musicians’ songs, a marionette dance, recipes, squirrels and pigeons and one awesome helicopter head spin, plus lots of smiles along with tears, Doris Diether was remembered in Washington Square Park this past weekend.

Diether, the legendary Greenwich Village activist who was an ally of Jane Jacobs in their fights against Robert Moses, died at age 92 on Sept. 16 at her home on Waverly Place, just steps away from her beloved park.

A large crowd filled the Garibaldi plaza for the memorial Saturday afternoon. On the raised stage area, big golden letters spelling out “Doris Diether” hung on the front of a white tent under which speakers gathered. On the north side of the plaza, in front of the Garibaldi statue, strung along a clothesline and arrayed on tables were a collection of photos of Diether, black-and-white ones from her early years, color from more recent years.

Brewer confirmed that Diether “has the record” as both the oldest and longest-serving community board member ever — and that it’s a mark that won’t be broken since board term limits are due to kick in soon. New York City residents voted in a ballot referendum a few years ago to approve term limits for community boards.

Riffing on the famous homey recipes Diether would include in her famous holiday cards, Brewer said there was one that Diether never sent out — the one with the ingredients of her own makeup, including a ton of “human heart” and a helping of “classy.”

Gerson said Diether’s eternal wish was to “keep up this park and keep up this community — and I know that we shall.”

Gerson later added that Diether was “the last of the lovable liberal Republicans of Greenwich Village.”

“We’ve got one life, one chance on this planet to make a difference, and that’s what Doris has done,” Bottcher declared. “Thank you so much, Doris, for showing us how to live life to the fullest.”

Hoylman got to know Diether well during his time on Community Board 2, during which he did a stint as board chairperson before going on to elected office.

“She was an incredible resource, first of all, on zoning, second, on landmarks and third, on history,” he told The Village Sun.

“We, as elected officials, were so used to presenting her proclamations,” he added. “I’m glad we recognized Doris’s contributions while she was living.”

“Not only do I oppose them,” he said, “I used Doris Diether as ‘Exhibit A’ — for institutional memory that is erased when longtime board members leave.”

David Amram, the legendary musician who was friends with Jack Kerouac and the Beats and also knew Diether as a contemporary, played a special tribute to her interwoven with snippets about Kerouac.

Lynne Brown, a New York University senior vice president, paid tribute to Diether “as an adversary — a worthy adversary. … Doris knew more about zoning and landmarking than anyone.”

One of the memorial’s most emotional moments came when Tac, one half of the acrobatic tumbling team of Tic and Tac, recalled how Diether had defended the right of musicians to play in the park. This happened at least twice in recent years, including a period when Community Board 2 was mulling calling for a crackdown on loud music, including drumming. A drummer accompanies Tic and Tac during their act. Diether, though, bucked the quality-of-life critics, feeling drummers should be allowed to play because their music wasn’t amplified.

Tac started giving his remarks about the veteran activist, but quickly was overcome with emotion.

“You were kind enough to use your voice, brave enough to speak up, which is why,” he said, choking up with sobs, “which is why when we seen you, we would stop our show [and give you] hugs and kisses.”

In Diether’s honor, Tic and Tac then did a signature move they have performed for park crowds and stars from Michael Jackson and Bon Jovi to, “yes, even Michael Bublé,” they joked — their famous helicopter head spin.

Another highlight was when the multitalented Ricky Syers sang an original song about the Village icon titled, “Every Day is Doris Day in Washington Square Park,” while his “Little Doris” marionette danced along with him.

Syers later explained how he and Diether first connected. He said they had both spotted each other in the park. Then she came over and showed him some research she had done on puppets.

“I had to one up her,” he said, on why he then crafted the mini-Doris marionette. Their unique friendship was profiled in the first “Humans of New York” book.

Attorney Frank Angelino recalled meeting Diether when he was working for the Department of City Planning in the 1960s and being blown away by her expertise.

“I was immediately impressed,” he said, adding, “You remember Doris with the quizzical smile and sparkling eyes.”

Elizabeth Butson, a board member of the Washington Square Association, said, speaking for all its members, “We will miss Doris very much. She had the most beautiful smile, the most engaging personality.”

Butson, a former publisher of The Villager, also recalled that Diether wrote ballet critiques for the paper.

Lois Rakoff, a fellow C.B. 2 member, said she and Sharon Woolums have been working on getting a bench on the park’s west side, near the Alexander Lyman Holley monument, named in Diether’s honor. She also mentioned Diether’s famed holiday greeting cards that went out to hundreds.

“Doris turned me on to the 1-800 number for holiday stamps,” she noted.

Attorney Allison Greenberg, a former C.B. 2 member, recounted how she had learned so much from Diether.

Greenberg read a skillful poem she wrote about Diether and her rigorous vigilance on community issues. It included a line likening the veteran activist to Colombo, the shrewd TV detective, always asking “one more question” right before C.B. 2 members voted on the board’s resolutions.

“Thank you, Doris,” she said, “for always asking the last question.”

Sharon Woolums, who co-organized Diether’s epic 80th and 90th birthday parties at Judson Church as a member of the Doris Diether Birthday Bash committee, said her new personal mantra is “What would Doris do?”

Bowery activist David Mulkins called Diether the “earth mother of the Village.” Drawing applause, he noted it would be great if a Doris Diether foundation were created to help locals in their fights on community issues, like stopping the Soho/Noho rezoning and saving Elizabeth Street Garden and East River Park.

Sharing humorous anecdotes, he recalled Diether’s response when friends complained about all the piles of books and documents filling her apartment: “She said it breaks her falls.”

Mulkins said that once when he jokingly suggested wrapping Diether in bubble wrap, also to protect her from falls, she thought for a second, then shrugged, “That wouldn’t work.”

The Bowery activist also gave the backstory on the great photo by him that was the lead shot in The Village Sun’s obituary on Diether. It was taken at the Waverly Diner, which was her local go-to restaurant, showing Diether with a huge slice of chocolate cake on a plate in front of her.

“I said, ‘That cake is almost as big as your head and she reared back and laughed,’” he said.

Julio Mora, a former officer staffer at C.B. 2, recalled his interactions with Diether and what he learned from her.

“She exuded tenacity, independence and sweetness,” he said. “She had an impeccable memory and attention to detail. She was the only committee chairperson who used a typewriter to type up her meeting reports,” he added, noting he taught her how to use a computer at the board office.

“She felt the younger generation had become complacent,” he noted. “She valued that you have to make the effort…to fight hard when you have to, and do not yield. I want to continue to be like Doris.”

Susan Goren, the daughter of former N.Y.U. Chancellor Arnold Goren, recalled how she and Diether shared an interest in the welfare of the park’s squirrels. Goren, as she noted, is known as the “Squirrel Whisperer.” Diether would identify ailing critters so Goren could care for them.

“I raised four of Doris’s squirrels and they went for release,” she said. “She loved everyone for who they were and she never turned her back on anyone in a crisis.”

Sean Sweeney, a former longtime C.B. 2 member, shared a story about a landlord who made the mistake of physically threatening Diether, who was known in the community for tenaciously fighting for tenants’ rights. As Sweeney told it, Diether mentioned the incident to the “old ladies” in the neighborhood and, well, word got around. A few weeks later, the landlord was in a local barbershop when three men burst in and beat the living daylights out of him.

The lesson was clear, Sweeney said: “Don’t mess with Doris.”

Photojournalist Tequila Minsky said that the tech-unsavvy Diether actually did have a Facebook following — thanks to Minsky. During the first year of the pandemic, Diether did not go outside. Minsky would bring her blueberry Chobani yogurt, “which she liked a lot,” and snap shots of her in the doorway. The photographer would post the pictures on her own Facebook page “and she developed a Facebook following.”

The memorial was organized by Erin Rogers, whose family took Diether under their wing in the activist’s later years. They befriended Diether one day in the park and soon she was attending their holiday dinners. Rogers also became Diether’s healthcare proxy.

George Vellonakis, who led the contentious renovation of Washington Square Park in the early and mid-2000s and, more recently, was the park’s administrator for two-and-a-half years, recalled Diether’s constant presence in the park.

“I used to go out to dinner with her,” he told The Village Sun. “No matter she was against the park [renovation], I loved her. She loved the park. She was there every day.”

Guitarist Tariq Shaw, who stopped by the memorial to pay his respects, told the newspaper that he knew Diether for more than 40 years, since 1979 when he was in high school and first started coming to Washington Square Park. He recalled how, a couple of years ago, he asked the Village icon why she was always chatting with other men in the park but not him. The two wound up going out for a bite at, of course, the Waverly Dinner and having a ball.

“I had the time of my life,” he said of their date. “She’s a walking encyclopedia of history. She always had time for everybody.”

Others had stopped by Diether’s house to say their goodbyes to her at the end as she lay in bed, eyes closed, drifting away. But Shaw said he didn’t want to do that. That wasn’t the final image of her that he wanted to keep in his mind.

“I want to remember Doris in this park,” he said, “even in the old days with her walker.”