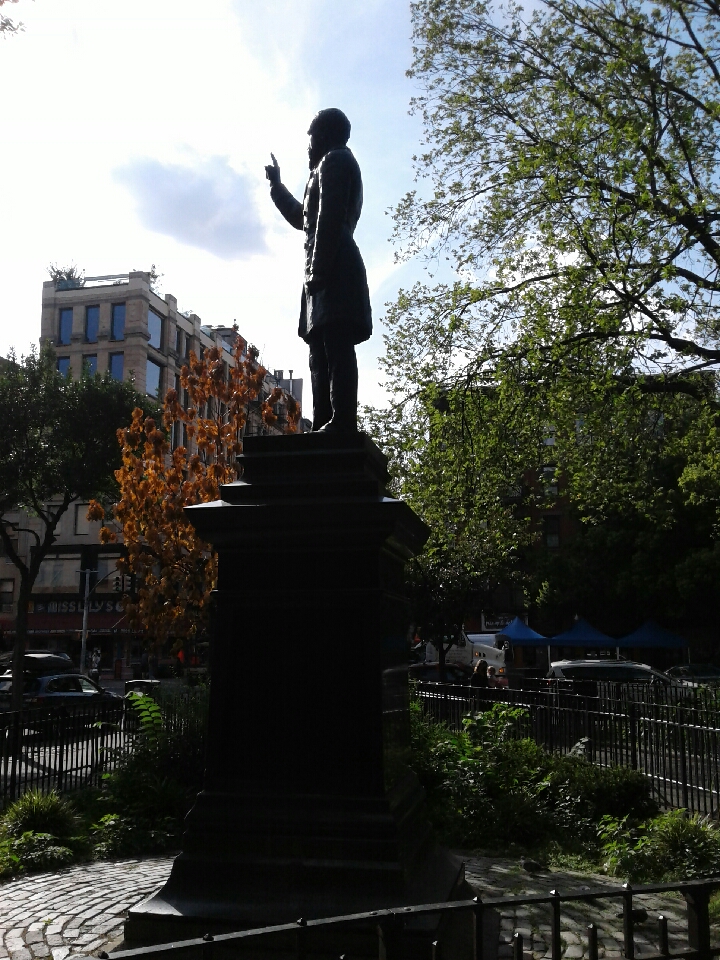 Cancel Cox? The Samuel S. Cox statue in Tompkins Square Park is under scrutiny. (Photo by The Village Sun)

BY THE VILLAGE SUN | The U.S. Postal Service is under attack by Trump. Meanwhile, locally, a statue of the so-called “Letter Carriers’ Friend,” Congressmember Samuel S. Cox, is under scrutiny — and perhaps could even be under physical attack, too, if not for being constantly guarded by police.

The Cox statue, in Tompkins Square Park, is now taking heat on the political front, as well.

On July 30, East Village Councilmember Carlina Rivera wrote to Mitchell Silver, the Parks Department commissioner, indicating that she feels the statue should not be in a public setting like the park.

“I hope that you will consider speaking with the local community immediately, specifically Black residents of the Lower East Side, to consult with them on the Cox statue’s fate,” Rivera told Silver.

Although the congressmember improved working conditions for postal workers, earning him his nickname, he was definitely not a friend to black people. In fact, in the years right before the end of the Civil War, he forcefully lobbied against emancipation.

Amid a season of statue reckoning, his Tompkins monument apparently was recently targeted for toppling.

As The Village Sun reported last month, on Sat., July 25, a large detail of police showed up in the park to guard the Cox statue from an apparent credible threat. The monument had been tagged with anti-police graffiti and an anarchy symbol just the week before. Police also cordoned off the statue and the nearby chess tables using metal barriers.

Four days after The Village Sun article, Rivera wrote Mitchell expressing her concern about the statue.

Cops have since moved away the barriers to allow people to sit at the chess tables once again. But an idling police SUV with officers inside continues to sit on the park path right next to the Cox statue.

On the other side of town, also under 24/7 police watch is the Washington Square Arch, whose two statues of slave-owning Founding Father George Washington were splattered with red paint at the end of June.

Rivera’s letter seems clear on the question, as it relates to the Cox statue, in the immortal words of Joe Strummer on the mural across the street, “Should I stay or should I go?”

“Historians and numerous New Yorkers have highlighted that Cox’s history — beyond his work regarding pro-labor policies at the United States Postal Service — includes very disturbing examples of white supremacy, particularly as it relates to emancipation and Black civic participation in the mid-1800s,” Rivera wrote the Parks commissioner. “Today’s demands for social justice that are being raised across this country must be met with a holistic review of the (mostly) men whom we honor with place names and statues in our public spaces.

“I am sure most New Yorkers would agree that these landmarks should not remain as a public reminder to many of our neighbors that, for much of United States history, they were not considered nor treated as equals to white Americans,” Rivera continued. “As many historians have suggested, such statuary is better situated in non-public settings, such as museums, where they can remain as an educational tool for future generations choosing — operative word — to view and understand our nation’s racist legacy. Encountering the Cox statue while visiting Tompkins Square Park is not a choice.”

In a statement, the Parks Department said, “We recognize the importance of a contemporary reckoning and reevaluation of historical figures. We appreciate the comments shared and Parks will engage in conversation with those who have expressed concern.”

The Parks Department reportedly told PIX 11 that it condemns Cox’s comments on race and slavery.