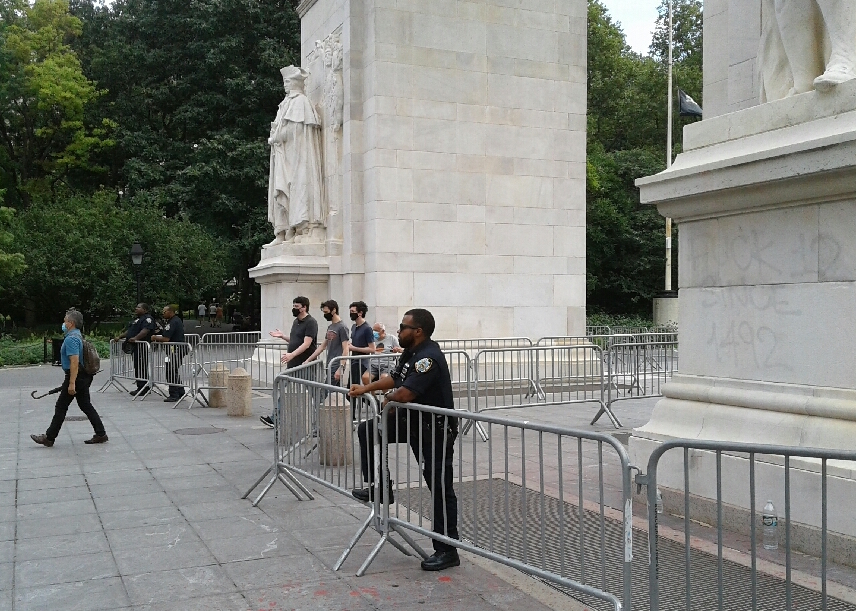 Four police officers were guarding the Washington Square Arch on Friday. One of them is not pictured above because he was on the arch's southern side. (Photo by The Village Sun)

BY THE VILLAGE SUN | Murders and shootings are way up citywide, but at least in Greenwich Village the Washington Square Arch is safe.

Last month, Sixth Precinct officers told The Village Sun that the arch was, in fact, under 24/7 guard, and that at least two cops would be protecting it at any one time, while additional officers would be assigned around the park to be ready for protests should they pop up.

We are tracking down the two Anarchists who threw paint on the magnificent George Washington Statue in Manhattan. We have them on tape. They will be prosecuted and face 10 years in Prison based on the Monuments and Statues Act. Turn yourselves in now!

On June 29, vandals pelted the arch’s pair of George Washington statues with balloons filled with red paint. Outraged, President Trump subsequently tweeted that the “two Anarchists” who did it should turn themselves in, and would face 10 years behind bars.

Toward the end of last month, police released additional photos of the alleged arch vandals.

It’s not clear why a total of four officers were posted on arch duty on Friday afternoon, though maybe it’s possible they were on overlapping shifts. Asked about it, one of the officers just shrugged and said he didn’t have an answer.