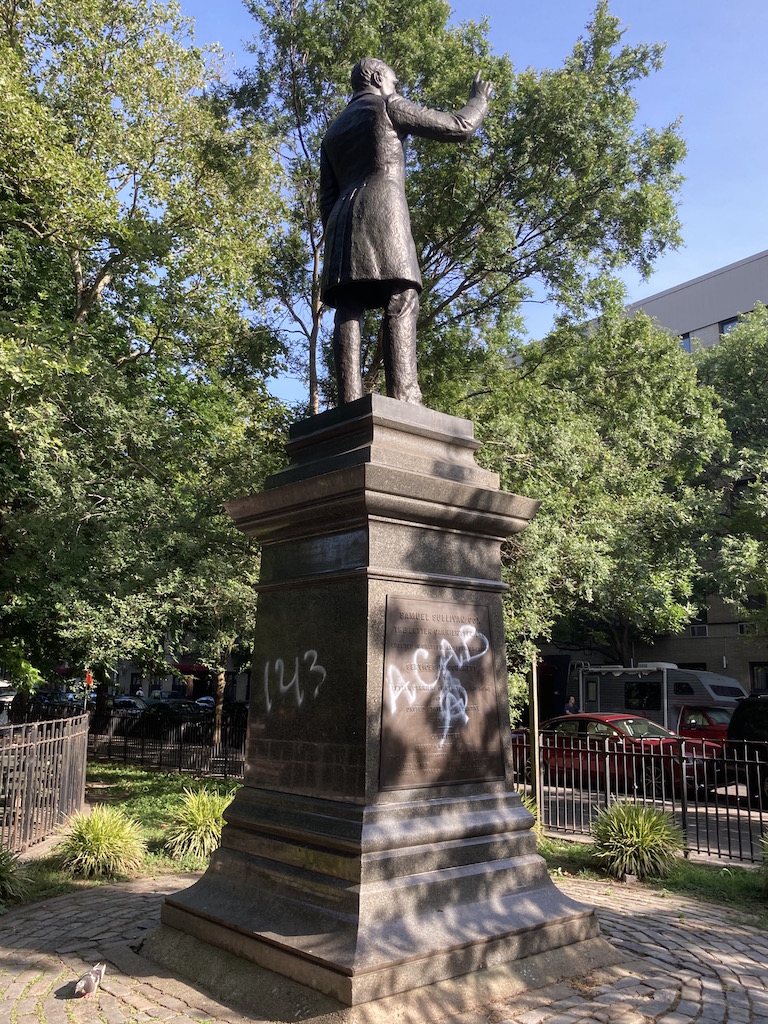 Someone recently tagged the Samuel Cox statue in Tompkins Square Park with the anti-police slogan "ACAB." Is the statue now being targeted for toppling? (Photo by Paul DeRienzo)

Statues of Confederates and slave owners around the country have been toppled, torn apart, torched and tossed into lakes.

If they’re lucky, they’ve only been vandalized with paint, as happened to the two likenesses of slave-owning Founding Father George Washington on the Washington Square Arch in late June.

Meanwhile, on the other side of town, police apparently have intel that social-justice warriors may now be zeroing in on the statue of Samuel Sullivan Cox in Tompkins Square Park.

About a week ago, the monument to the former Ohio and New York congressmember was tagged with “ACAB,” the currently in-vogue anti-police slogan “All Cops Are Bastards,” and an anarchy symbol.

This Saturday afternoon a detail of cops were spotted standing protectively near the statue, in the East Village park’s southwest corner. Movable metal police barricades had also been newly placed along the side of the park path at that spot. The barriers’ purpose wasn’t immediately clear — perhaps they were to be deployed, if necessary, if a crowd formed?

Trigger, the former owner of the Continental, on Third Ave. near St. Mark’s Place — one of Joey Ramone’s favorite music venues — sent The Village Sun photos from the park on Saturday around 4:30 p.m.

“Right now in Tompkins,” he texted the Sun. “Cops heard that protesters are gonna take down this statue of Samuel S Cox!”

Asked if he was certain the police were there to guard the statue, he said, absolutely.

Indeed, he was. Based alone on a speech that Cox, then an Ohio representative, gave in 1862 condemning emancipation, one could see why statue-toppling vigilantes might now be eagerly eyeing his Tompkins monument.

In the speech, Cox stoked fears that ending slavery would spark a flood of “millions” of southern blacks migrating to Ohio who would compete for jobs with whites.

“It is an absurdity to say that two races as dissimilar as black and white, of different origin, of unequal capacity, can succeed in the same society when placed in competition,” Cox scoffed. “There is no such example in history of the success of two separate races under such circumstances.”

Cox was not alone among northern Democrats in calling for slavery to be maintained, and his speech voiced many of their concerns.

Trigger was not the only one to notice the police presence. Another East Villager, Carla Jean, posted on Facebook on Saturday about it, noting how “all of those cops showed up to guard the statue.”

By Sunday, police had subsequently extended the barricades out onto the path by 5 or 6 feet to create what Trigger termed “a moat” around Cox.

A police spokesperson said he did not have information on officers specifically protecting the Cox statue over the weekend, but he said many spots around the city are currently getting extra police details.

“I have nothing on that,” he said of the alleged threat to the Tompkins monument. “We got cops standing in front of things all over the city right now because of the ongoing situation — any kind of landmark or place where people gather.”

As first reported by The Village Sun, cops are now guarding the Washington Square Arch around the clock to prevent another attack against it.

After losing his seat in Ohio in 1864, Cox moved to New York, where he was reelected to Congress in 1868.

The statue of him — which originally stood at Astor Place and Fourth Ave. — was funded by $10,000 raised by postal workers after his death. Cox was known as the “Letter Carrier’s Friend” for passing legislation leading to paid benefits and a 40-hour workweek for postal employees.

But he clearly was not black people’s friend.

Writing in 2014, Singer did not advocate for removing the East Village Cox statue but called for adding an explanatory plaque nearby.

Speaking on East Village journalist Paul DeRienzo’s WBAI radio show two years ago, the professor — about 15 minutes in — called the little-known Cox statue “one of the weirdest ones.”

“He was a champion of slavery,” he said.