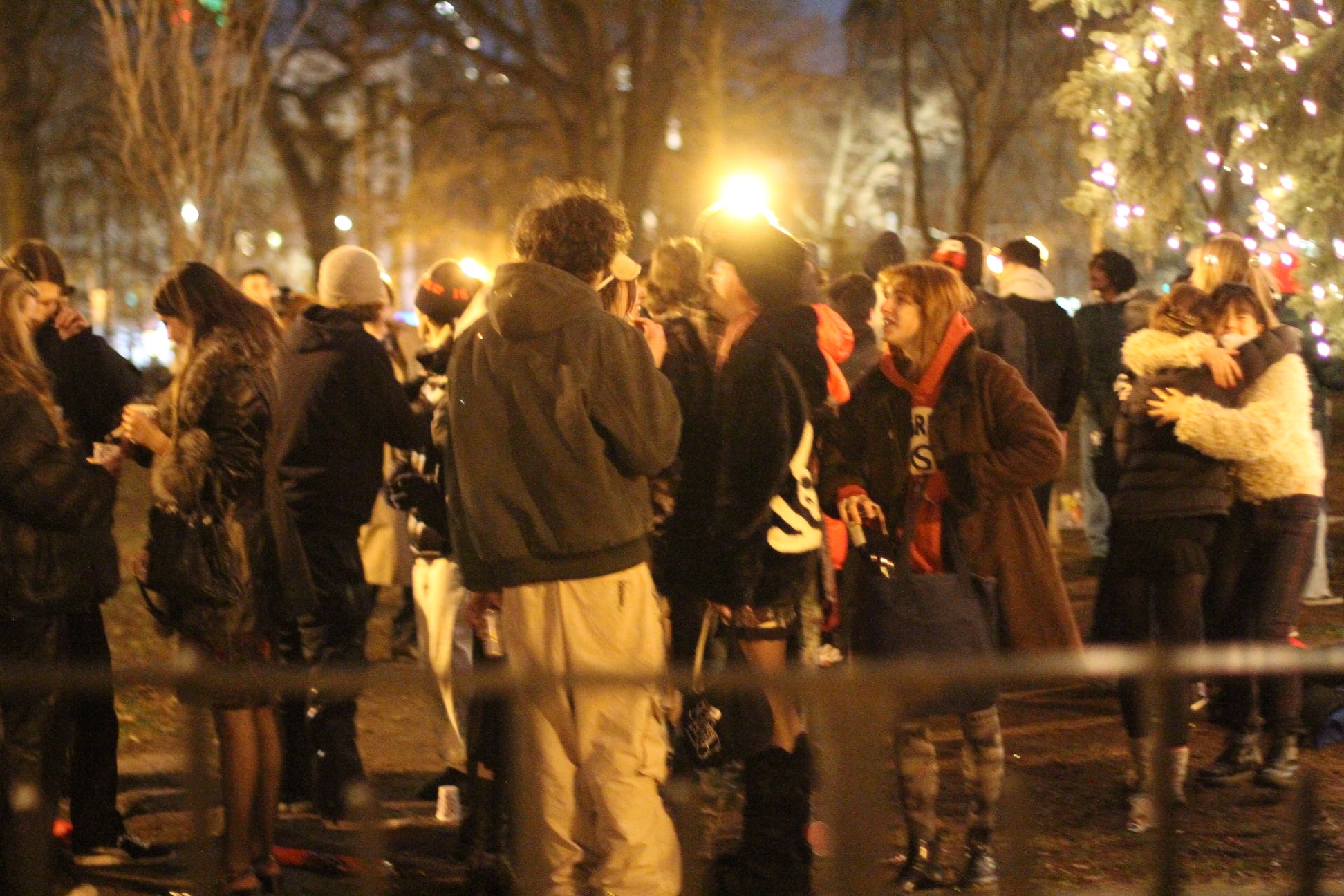 Ushering in the new year in Tompkins Square Park. (Photo by Paul DeRienzo)

BY THE VILLAGE SUN | A New Year’s Eve “after-party” to commemorate the eviction of the homeless Tent City from Tompkins Square Park nearly 30 years ago ended on a somewhat similar note — with cops kicking the revelers out of the park.

As if on cue, right after the park’s midnight curfew, as 2020 had mercifully given way to 2021, a convoy of police vehicles streamed into the place.

“The park is closed,” officers announced.

East Village journalist Paul DeRienzo accused the cops of being “aggressive,” in the way they ordered the revelers to vacate the park. As the officers were herding people out, he asked for confirmation that their body cameras were turned on.

Another man who had been enjoying the park party scoffed that the police were from the “Anti-Frolic Division.”

Meanwhile, Jimmy Simopoulos a.k.a. Jimmy Sims, who is recovering from a recent stroke, was out enjoying the night. He was busy handing out free beer.

“Olde English, Guinness and Ballantine!” he called out.

The Cancel The Rent Protest Tompkins Anarchist New Year’s Virtual and Live Afterparty was organized by former East Village activist John Penley. Though he now lives in Las Vegas, he put the event together by creating a Facebook page for it.

It was dubbed an after-party because two other radical events, a Time’s Up! bike ride and a NOISE anti-prison protest, had started earlier.

Penley paid for the free beer. To avoid passing joints — and the virus — during the pandemic, “magic brownies” were also supposed to be on the menu; but DeRienzo reported he did not see any.

Mark Apolloa, a friend of Penley’s, livestreamed the whole affair.

The revelers gathered around the park’s Christmas tree, which was planted in 1992 by Albert Fabozzi for his partner, who had died of AIDS. Fabozzi, who later became chairperson of Community Board 3, led the effort to clear the homeless out of the park. In doing so, he forever earned the enmity of Alphabet City’s punks, squatters and anarchists, who championed Tent City.

Penley was inspired to organize the rally after seeing a cheery post about the park’s Christmas tree on local blog E.V. Grieve. It made him recall watching the homeless being booted from the park right before Christmas in 1991, with one of them, Barbara Henry, carrying out her holiday tree with her.

At the end of Apolla’s video, Chris Flash, publisher of The Shadow, gave some history to put the night in context. His East Village anarchist paper chronicled the struggles over Tent City and the squats, as well as the fight against imposing a curfew on the park.

“For what it’s worth, we held off the forces of gentrification for a good four years, until 1992, roughly,” Flash said. “But the forces were too strong; they got the money, they got the political clout, they got the police on their side. New York City, the Lower East Side became a safe investment vehicle for yuppies and business interests.

“But we’re still here,” he declared. “We kept our park. It’s still our park. We’re here till death. These moneyed transients come and they go. When it’s not cool anymore, they split. It’s our f—in’ neighborhood, for better or worse.”

As they shut down the New Year’s Eve party, police cited the curfew. But Apolloa said people he spoke to while livestreaming said the curfew usually is not enforced and that people can hang out in the park at all hours if they want to. He said he plans to come back to the park at midnight every night for a week to check if the curfew is actually being enforced.

DeRienzo did a segment on his WBAI News radio show about the police shutting down the park celebration. In the clip, he and Flash note that the park gates at Seventh St. and Avenue A were closed when the police ordered everyone to exit, forcing people to climb over them to get out.