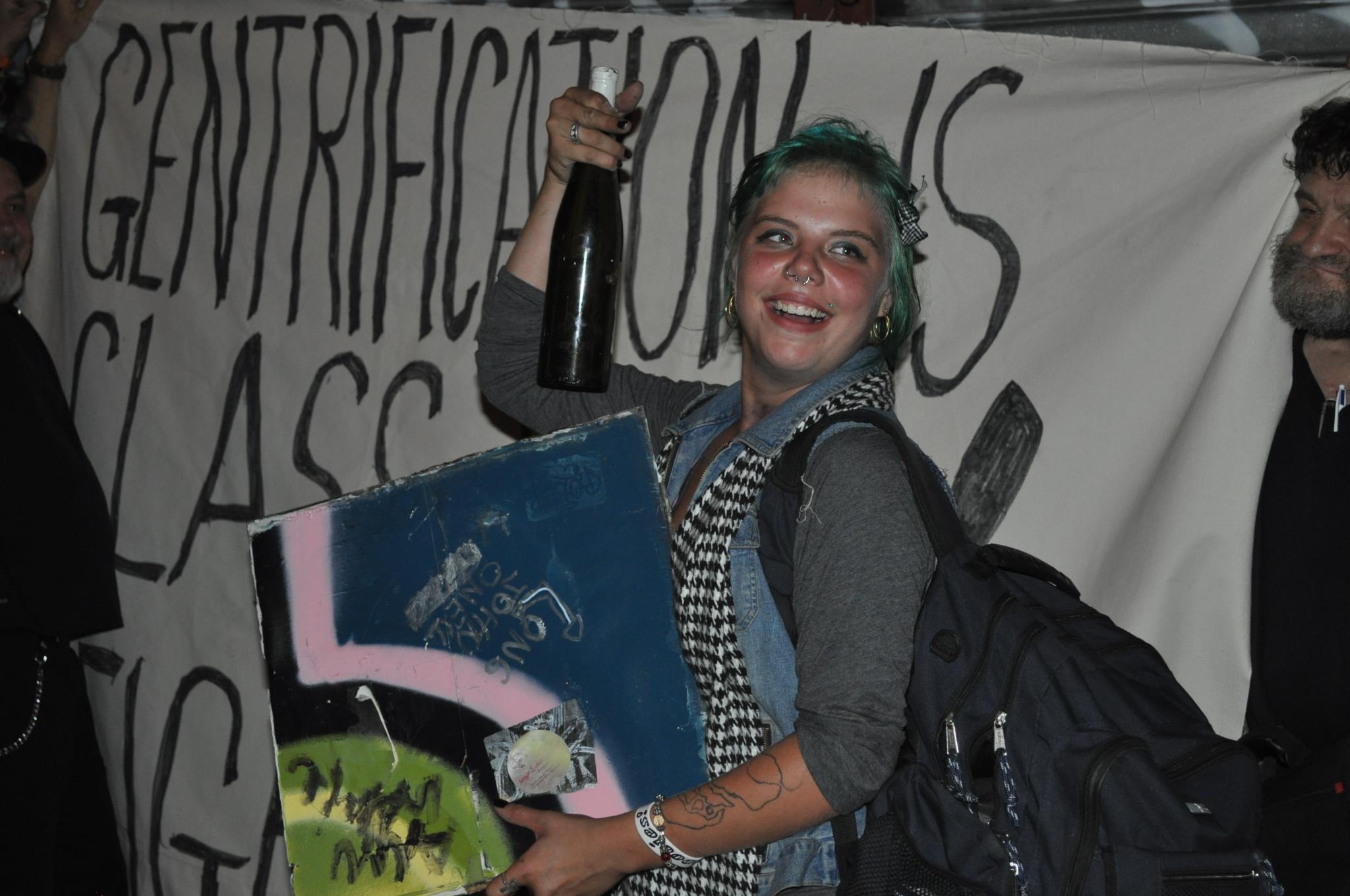 After the closing of the Mars Bar, at E. First St. and Second Ave., back in 2011, a woman hoisted a bottle that she had grabbed from inside the place. (Photo by John Penley)

BY THE VILLAGE SUN | Free beer, brownies and tips on squatting, which might well come in handy soon — what more could you ask for on New Year’s Eve in the time of COVID?

A Cancel The Rent Protest Anarchist New Year’s Virtual and Live Afterparty will happen in Tompkins Square Park from 10 p.m. to 2 a.m. on Dec. 31. Fittingly, for the pandemic, the event is being organized remotely. East Village activist John Penley, who now lives in Las Vegas, has been putting it all together using Facebook. The hoppy happening will also be livestreamed.

Penley said he is just waiting for his $600 stimulus payment to hit his direct deposit and then will be PayPaling $50 to a friend in New York City to buy 12-ounce bottles of beer — no 40-ouncers — for the bash.

There will also be “magic brownies,” he said, though no joints, either.

“No passing joints, no passing anything, that’s a main way to spread the virus,” he noted. He stressed he wants the event to be safe, with people masking up and social distancing.

Obviously, it won’t be a drunkfest, either, since, with only $50, the suds will be “limited,” he noted.

The former activist, who shot photos for the New York daily tabloids during the East Village’s squatter heyday in the 1980s and ’90s, predicts squatting may well soon return. Evictions have been postponed for another four months, but eventually landlords will expect to collect the rent, he warned. In the ’80s, many landlords simply abandoned their buildings, some also setting them on fire, for insurance money.

Former squatters have already registered on the event’s Facebook page that they are either “going” or “interested.”

“There will be talks by squatters about how squatting may be coming back,” Penley said. “A laundry list of former squatters have said they’re interested [in attending].

“The way that things are going in New York, eventually people are going to get evicted,” he warned. “They want to extend [eviction protections] until at least people get vaccinated, so you don’t have a whole lot of infected people living on the streets.

“That’s the same way it was before,” he recalled of the former squatter days and the thinking back then. “I mean, ‘Why should we stay on the street when there are all these building we can go in?'”

Because there are two other annual radical New Year’s Eve events kicking off earlier — a Noise Demo against prisons by NYC Anarchist Black Cross and a Time’s Up! mass bike ride — Penley is dubbing his shindig an afterparty.

There’s a backstory — actually, you might call it a “backlash” — behind why Penley organized the radical New Year’s bash. The idea came to him when he saw photos of the Tompkins Square Christmas tree on E.V. Grieve earlier this December. The images stirred up bad memories for him of when the police, under Mayor Dinkins, kicked the homeless out of the East Village park, where they had been living in “Tent City” for two years.

Tompkins Square Park was cleared out in 1991 and then closed for renovations for two years. In 1992, activist Albert Fabozzi planted an evergreen tree in the park for his partner Glen Barnett, who had died of AIDS. Three years later, Fabozzi became chairperson of Community Board 3. He was a leader in the fight against squatters and anarchists for control of the park.

Every Christmas there is now caroling around the tree, led by the Theater for the New City, along with a community gathering.

“I was inspired by pictures of the Christmas tree,” Penley said, “how it forgets how all the homeless were evicted and were forced to carry their Christmas tree out of the park.

“Barbara Henry was pictured in The New York Times carrying her Christmas tree out of the park,” he recalled. “I actually saw her doing it myself.

“Barbara Henry died the next year of AIDS in the hospital. I went to see her. It was horrible. A lot of people that had been in that park died of AIDS.”

Despite the annual feel-good holiday celebrations around the tree, Penley has a hard time forgetting the eviction of the downtrodden homeless encampment right before Christmas nearly 30 years ago.

He sees the planting of the current tree as the victors planting their flag in the park.

The radical rager will likely happen in the park’s plaza where the band shell used to be, he said. Though, he quipped of the revelers, “Maybe they might drink a few beers and walk over and take a piss on the tree.

“I have no problem with that tree and the community liking it,” he said. “I don’t want the tree harmed. But I do want people to remember the way the homeless were evicted from the park.”