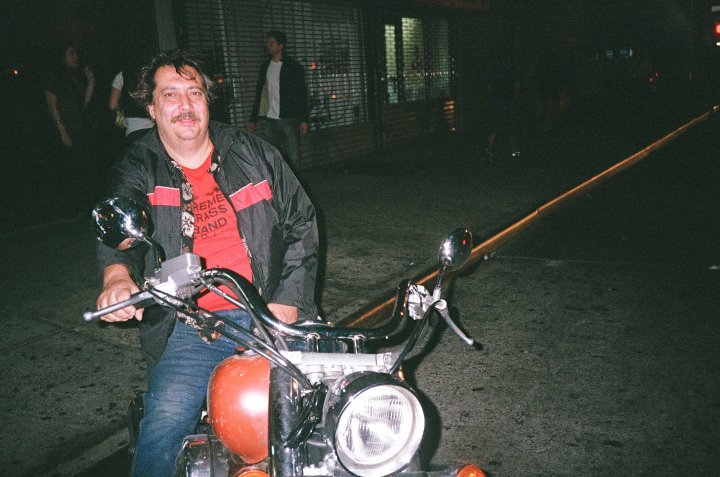 Jimmy Simopolous on his motorcycle about 10 years ago. (Photo by John Penley)

East Village’s ‘Jimmy Sims’ on the mend after stroke

BY THE VILLAGE SUN | Jimmy Simopoulos a.k.a. “Jimmy Sims,” an East Village activist and a longtime sound man for shows in Tompkins Square Park, recently suffered a stroke but is recovering.

Simopoulos, also known as “Jimmy the Greek,” 61, was stricken a few days ago in his apartment. According to Chris Flash, the publisher of The SHADOW, the East Village anarchist community newspaper, Simopoulos “had to be dragged down the stairs to the ambulance because the gurney wouldn’t fit in the hallway.”

“He is looking good,” he reported. “Other stroke patients I’ve seen were in much worse shape. He has a slight difficulty in talking and swallowing, but he can still communicate clearly. His brain is clear — it’s just the circuitry to his right side that needs to be regenerated.

“He told me that he will be leaving the hospital tomorrow to begin therapy at another location in order to regain the use of his right side.

“When I told him that many friends are asking about him online, he seemed amused and surprised.”

Originally from Massachusetts, Simopoulos for years has been a fixture on the East Village activist and counterculture scene.

“Jim has been involved in righteous causes and community organizing forever, including block parties, community gardens, helping his neighbors,” Flash said. “He is also a mechanical genius, even occasionally breathing new life into sunken and abandoned vessels. This past Saturday, he was to assist in a garbage fashion show coming out of La Plaza Cultural, but the stroke took him out of that.”

John Penley, a former East Village activist and photographer now living in Las Vegas, said Simopoulos had been planning to come out and visit him.

“We were going to rent a car and go up to Lake Tahoe,” he said.

“Jimmy’s known all over the East Village for doing the sound for those shows for the last 40 years,” he said. “He had a stage and everything. He had to hire people to help him. Every band that has played in the Lower East Side or Tompkins Square Park knows him. … Jimmy can fix anything.

“Jimmy was into the Rainbow Family,” Penley added, referring to the renowned hippie get-togethers. “All the Rainbows known him — the local New York ones and the national gatherings, too.”

He added that it’s a shame Simopoulos never wound up getting an affordable apartment in one of the former East Village squats after they were legalized.

“He is one of the few people that never ended up with an apartment,” Penley said. “He did so much with the squatters, but it never happened. If anyone deserved one, it would be him — and I would be next,” he added with a laugh.

A few years ago, Simopoulos had hoped to get a unit at 544 E. 13th St., the former squat where actress Rosario Dawson’s mother lives, but it didn’t pan out.

Penley said he’s getting a little worried about inviting people to visit. First, one of his best friends, who he had invited out to Vegas, died before he could make the trip, and now this happens to Simopoulos.

Joe Braun, a former East Village squatter who moved to New Orleans where he now leads a band, the Jazz Vipers, was concerned to hear about Jimmy Sims.

“He visited a couple of years ago and he did do some work on my plumbing, fixed some leaks, which I appreciated,” he said. “He did a couple of little odd jobs, too. He’s a great guy. … I saw him at the Rainbow Gathering at Vermont three or four years ago.

“I’m a little worried about him,” he said. “I’m glad to hear that Jimmy’s going to be healing.”