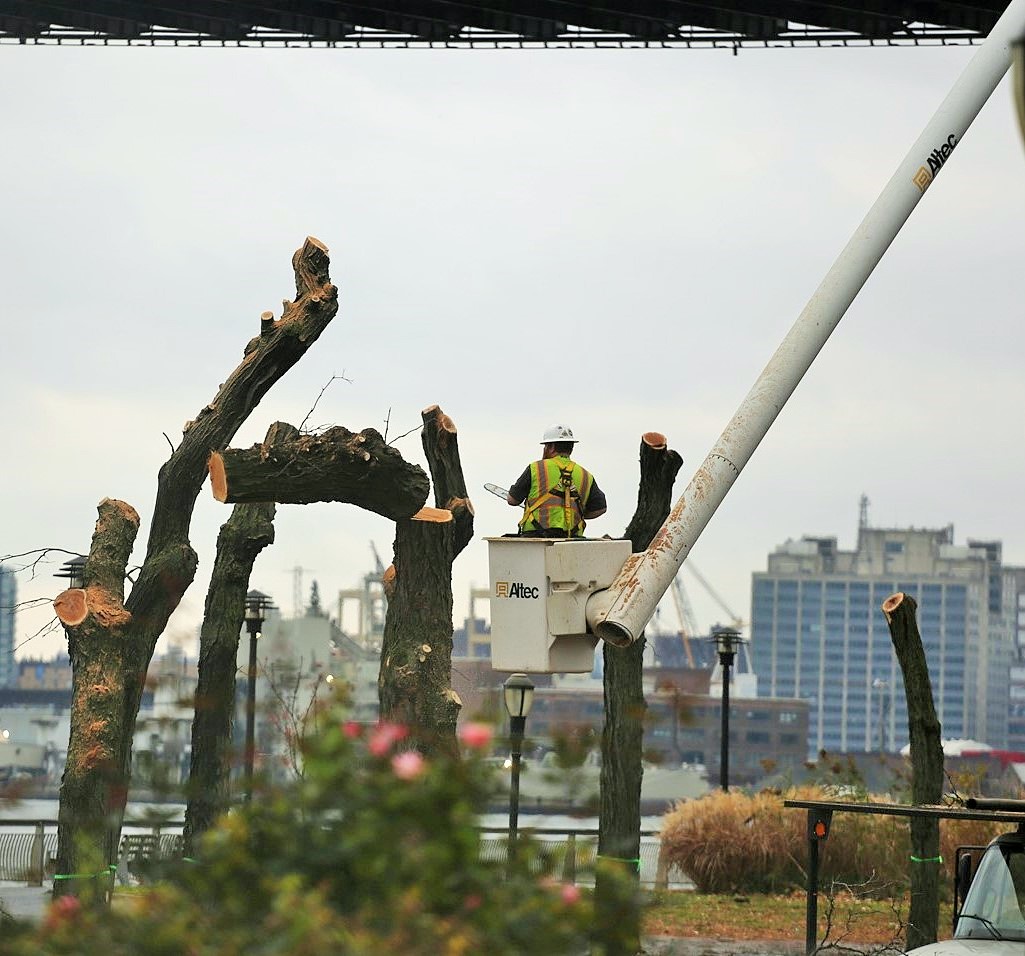 A worker chainsawed down stately London plane trees in East River Park's dance oval this past December as part of the park's destruction for a resiliency project. (Photo by © Jefferson Siegel)

BY THE VILLAGE SUN | One of the most contentious environmental efforts currently in the city — actually, on the entire planet — the East Side Coastal Resiliency megaproject is located right in the heart of Congressional District 10. The issue could be a hot topic at an upcoming candidates forum at The Cooper Union on Tues., July 19.

The newly redrawn district takes in all of Manhattan south of 14th Street — including all of East River Park — plus Brownstone Brooklyn and Borough Park.

The special forum focusing on the candidates’ environmental policies will be presented by the New York League of Conservation Voters Education Fund and The Cooper Union.

The event will be moderated by reporter Danielle Muoio Dunn of POLITICO New York.

Under the $1.45 billion E.S.C.R. project, East River Park is being completely razed and will then be rebuilt 8 feet to 10 feet higher to put it above the floodplain. Half of the park has already been reduced to a barren wasteland, with more than than half of the park’s 1,000 mature trees already chainsawed down.

Two of the candidates slated to attend the forum — former Mayor de Blasio and Councilmember Rivera, who currently represents the East Village — both championed the E.S.C.R. plan in the face of determined pushback from horrified locals. Opponents of the so-called “elevated park” plan instead supported a previous, community-approved design that would not have required destroying the entire existing park, but would have instead built a berm along the F.D.R. Drive.

Despite foes’ efforts to block the project in court, de Blasio was able to push through the start of the park’s destruction in his waning days in office.

A group including public housing tenant leaders called the Frontline Communities Coalition is allied with Rivera in supporting E.S.C.R.

The candidates forum will be held at The Cooper Union’s Great Hall, at 7 E. Seventh St., between Third and Fourth Aves., from 6 p.m. to 8 p.m.

As opposed to the usual entry spot on E. Seventh Street, entry for the event will be from a door on the building’s north side at Astor Place and Fourth Ave., with attendees then walking down through the colonnade on the building’s west side to The Great Hall.

Attendees are required to show proof of complete COVID-19 vaccination and booster and must wear a C.D.C.-recommended mask (disposable surgical, KN95, KF94 or N95) while indoors.

Members of the general public should register by clicking here.