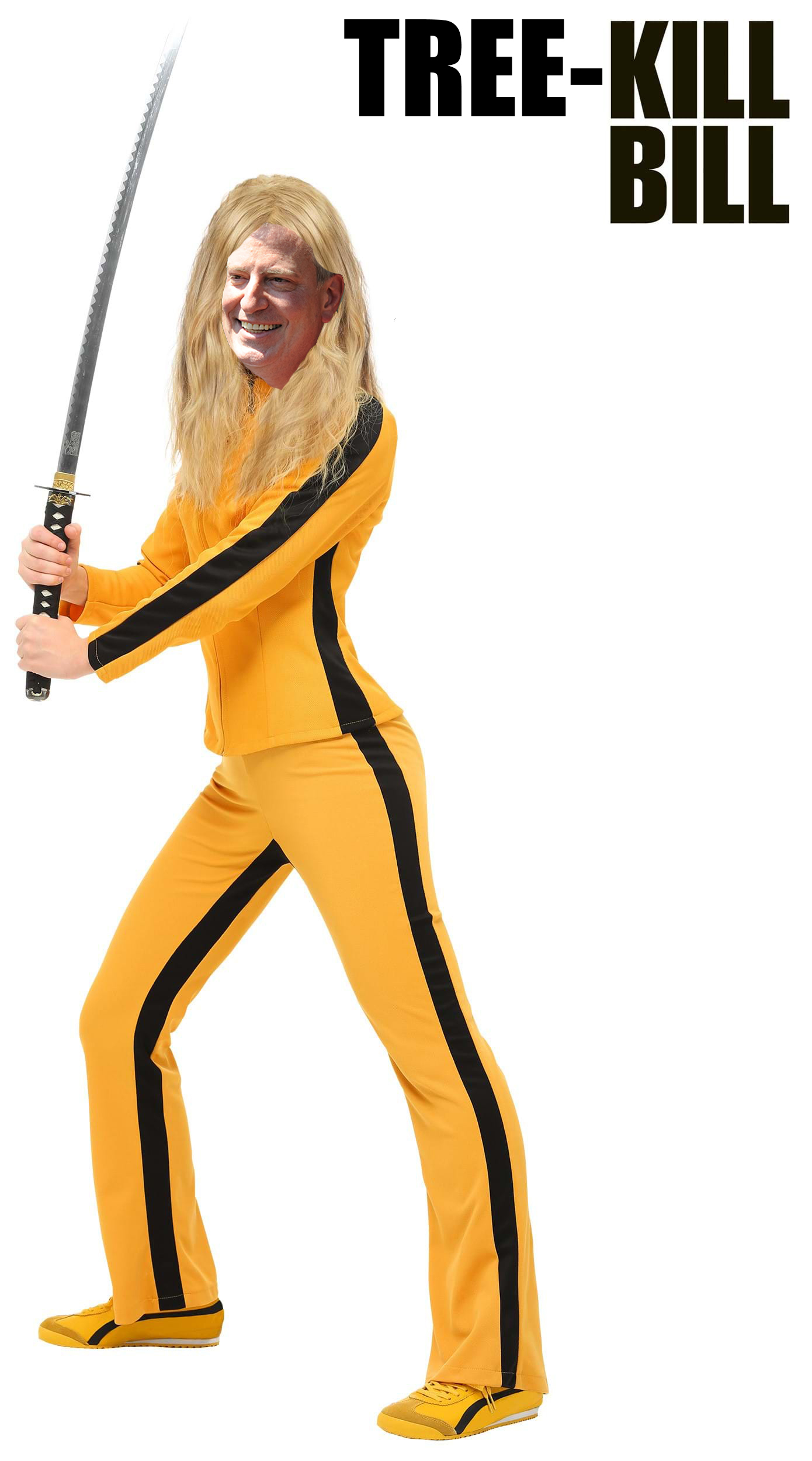 Mayor de Blasio a.k.a. "Tree-Kill Bill" is determined to destroy at least half of East River Park and its trees before he leaves City Hall in two weeks. (The Village Sun photo illustration)

BY LINCOLN ANDERSON | Lawyers desperately trying to stop Mayor de Blasio from destroying East River Park plan to file a “motion for contempt” with the Court of Appeals first thing on Monday morning.

However, before then, the city appears determined to ensure there won’t be much left to save. Early Saturday morning, workers were right back in the park — guarded by police —  to continue the job of killing every living thing in the park’s entire southern half.

“They’re cutting trees very very fast and bulldozing everything,” said Harriet Hirshorn, who was at the scene. “They’re working very hard over the weekend to destroy as much as possible. Cops are protecting them. Two chainsaws are going at all times and mulchers and a bulldozer.”

The activists showed up Saturday at 5 a.m. at Montgomery Street, where the construction vehicles enter the park, to try to stop the workers from doing more destruction. They brandished copies of the restraining order. But police were there, including Captain Erik Worobey of Transit District 1, ensuring that the workers and construction vehicles could enter the park and continue the work.

Park activists plan an emergency press conference in the park at Houston Street at 1 p.m.

Former judge Kathryn Freed is one of the attorneys on the community lawsuit against the East Side Coastal Resiliency project. She said it’s shocking that the mayor, with just two weeks left in office, is pushing ahead obssessively with cutting down trees in the park, even after the Court of Appeals on Wednesday issued a stay on a lower court’s decision on the suit.

“It’s unprecedented,” she said. “They know what they’re doing. They’re betting that even if there’s a contempt motion, that they can ride it out. … They’re violating a court order.”

Early on Friday, Freed and Arthur Schwartz, her co-counsel on the suit, went to the lower court, the Appellate Division, First Department, to try to get clarification on whether a temporary restraining order (T.R.O.) that the court had issued on Nov. 4 was still in effect.

However, Freed reported, “They said it’s not their job.”

According to the two attorneys, that T.R.O. was supposed to remain in place until the appeal of the community lawsuit was decided. The Appellate court ruled against the appeal on Nov. 30, causing the T.R.O. to be lifted. But after the Court of Appeals on Dec. 8 agreed to hear the appeal, the T.R.O. should be back in effect, the lawyers contend.

The city, however, is not interpreting it that way. On Friday, Ian Michaels, a spokesperson for the Department of Design and Construction, the lead agency on the coastal-resiliency project, tweeted: “The City has reviewed the Court’s written order and we do not believe it prevents us from continuing work on this vital resiliency project.”

D.D.C. distributed an alleged “internal memo” in the park on Friday morning that claimed the T.R.O. was no longer in effect. It stated: “Please be inform [sic] that Temporary Restraining order [TRO]…has been lifted.” As a result, the workers and police who responded to the scene ignored the protesters when they flashed copies of the Court of Appeals’ decision to hear the appeal.

Two activists — Hirshorn and Alice O’Malley — were arrested Friday around 9 a.m. when they tried to present the T.R.O. to the workers.

Back in July Comptroller Scott Stringer raised concerns about the park plan, but he, too, was unable to get through to “Chainsaw Bill.” Back then, Stringer did not sign off on the contract for the resiliency project. On Friday he tweeted, “I sent the East River Park contract back [to D.D.C.] due to serious unresolved issues, yet the City moved ahead. I’m still concerned that the community isn’t being heard, and actions like today’s don’t help.”

I sent the East River Park contract back due to serious unresolved issues, yet the City moved ahead. I’m still concerned that the community isn’t being heard, and actions like today’s don’t help.
⁰https://t.co/b7Jwn3Nsi9

Since the Appellate Division said it’s not its job to ensure the T.R.O. is still in effect, the plaintiffs’ attorneys will now go to the Court of Appeals on Monday.

Schwartz on Friday evening fired off an angry letter to the city’s attorneys, notifying them that an “Order to Show Cause to hold the City in Contempt” will be delivered to the Court of Appeals on Monday at 8:30 a.m.

“Let me say that the way you handled this, not seeking clarification from Justice Wilson, and then announcing to me at 6 p.m. last night, too late to seek relief this morning, that the city was resuming work on destroying the park, was despicable,” Schwartz wrote. “I don’t use those words very often. I hope that you and the mayor got joy out of every branch which was cut down, every 50-year-old tree which was killed, and the destruction of a youth athletic field. I wish I could see the look on Justice Wilson’s face when you tell him that he wasn’t staying anything when he signed the December 8 Order [to stay the lower court’s decision].”

Freed, who until recently was a judge, said, “The city is just being wilfully obtuse. … They’re betting that if they cut down half of the trees, we’ll just go away. It’s pretty evil. And what they’ve done to this community, it’s pretty evil.”

In pushing the drastic resiliency plan, the city not only has divided the community but “they scared a lot of people,” Freed said.

While the de Blasio administration claims the park project would take half a decade to finish, the opponents scoff it would drag on much longer.

“Welcome to the city’s scorched earth campaign. The citY’s attorneys have disregarded the temporary restraining order & they’re going full speed ahead killing as many trees as they can before 9 AM. … we need everyone to come down and support.” – Alley @ERPAction @EmilyJCatalyst pic.twitter.com/ArFaFbsDDY

Freed said that, as well as chopping down trees, the workers are pulling out shrubs everywhere, plus yanking out saplings that park activists recently planted.

Ultimately, the first-of-its-kind resiliency plan calls for all of the park’s nearly 1,000 trees to be destroyed, after which the park would then piled with tons of infill soil to raise it 8 feet to 10 feet.

The plan is to do the project in two phases; on Monday workers closed off the park south of Stanton Street and that’s where they have since been cutting down trees.

Freed, who now lives in the Grand Street co-ops near East River Park, was a longtime former councilmember for Lower Manhattan’s District 1. She pointedly noted that the city is not destroying Battery Park, located in an area wealthier than East River Park, and will instead “let it flood and build a berm.” That was the original plan for East River Park that the city subsequently scrapped for the current “elevated park” plan.

“They’ve been ignoring East River Park and hoping it will die,” Freed said. “But it’s its own little biosphere and it’s doing just fine — or it was [before they started cutting down trees]. The Parks Department’s records show that over 90 percent of the park was healthy. The day after Hurricane Ida, it was back open.”

In a glimmer of hope, Freed noted that the judge on the Court of Appeals case, Rowan D. Wilson, is named after…a tree.

A rowan is a mountain ash native to Europe and America.