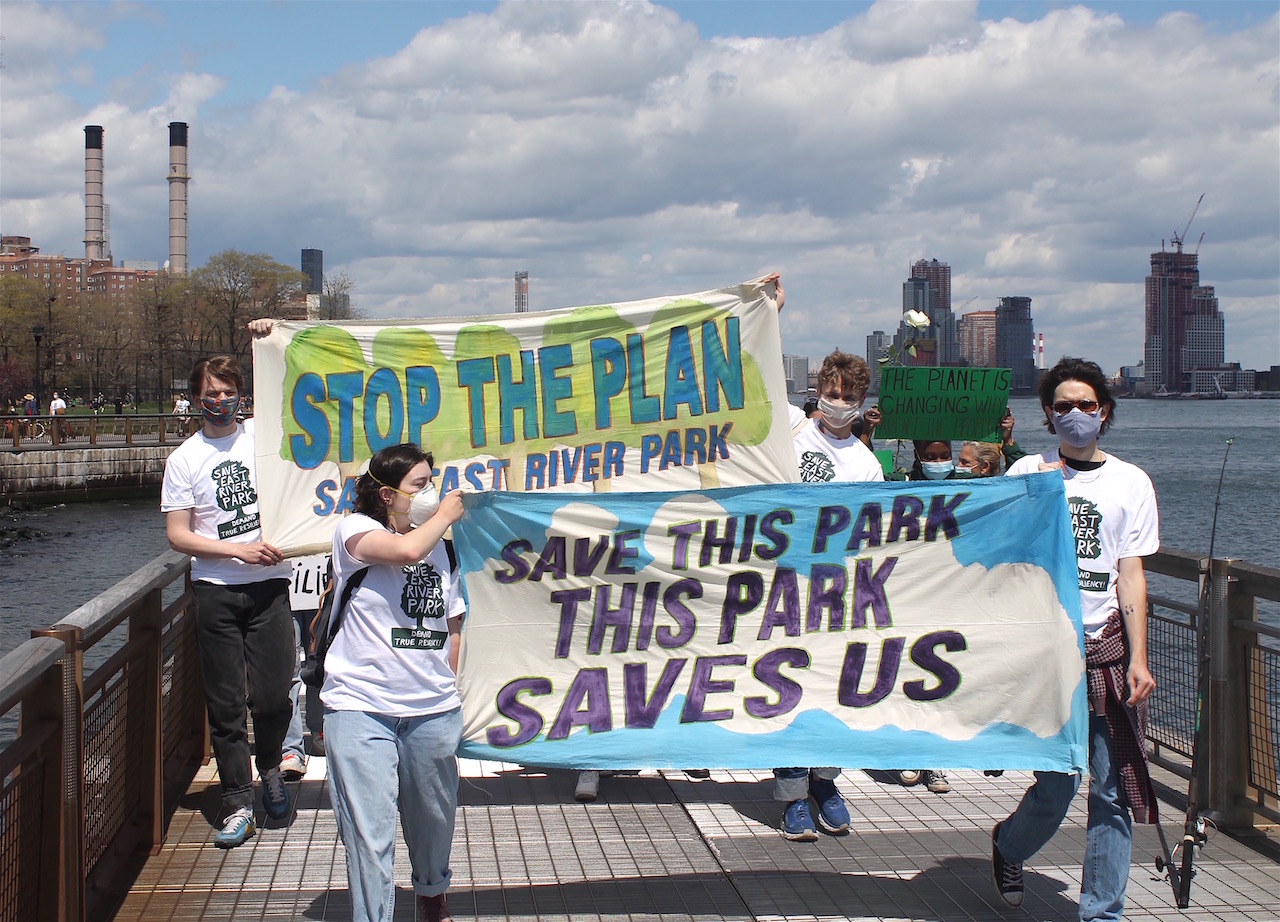 Protesters marched down the East River Park esplanade to the amphitheater. (Photo by The Village Sun)

‘Save our park!’ Hundreds of protesters — no politicians — march against East Side resiliency plan

BY LINCOLN ANDERSON | As protesters streamed across the E. Sixth St. bridge over the F.D.R. Drive into East River Park on Sunday, one of them had a telling insight.

In a David vs. Goliath-like struggle, local park activists are battling a plan by the de Blasio administration to destroy the existing East River Park in order to raise it and turn into a 2.4-mile-long levee. All the park’s trees, nearly 1,000 of them, would be clearcut for the scheme.

Local state lawmakers have previously said a vote should be held on whether to “alienate” the park, which is required when a park is used for some other purpose — in this case, for a years-long construction project to turn it into a flood barrier.

However, to date, that key alienation vote has not occurred and City Hall continues to push ahead with the $1.45 billion East Side Coastal Resiliency project.

Pat Arnow, a leader of East River Park ACTION, told The Village Sun that state Senator Brad Hoylman was in the park on Saturday and he told her that the city must ask the state Legislature to hold the alienation vote.

The resiliency plan’s opponents favor a simpler, more low-impact scheme from the Rebuild By Design process that would protect the surrounding community from flooding by creating berms and floodwalls in the park without raising it.

The opponents want several things: a comprehensive independent review of the plan before work begins; interim flood protection for the surrounding neighborhood; and a plan, as they put it, that is “truly resilient.”

One thing that they want ASAP is for Justin Brannan, chairperson of the City Council’s Parks Committee, to hold an emergency hearing on the contentious park plan, specifically investigating the heavy redactions in a recently uncovered “value engineering study” for the project.

The marchers kicked off Sunday at noon from Tompkins Square Park. After walking a few blocks, they promptly staged a die-in outside Rivera’s E. Fourth St. district office, lying down on the street and shouting, “Shame on you!”

Entering East River Park, they marched down the waterfront esplanade to the painted labyrinth just north of the tennis courts, where several poets read aloud pieces about the park. One evoked the theme of the Minotaur of Greek mythology, the monster that lived in a labyrinth and devoured sacrificial victims. However, in the poem, the modern-day Minotaurs were developers out to destroy communities and parks.

Reverend Billy and his Choir marched while singing, “We are the river / We are the trees / We won’t stop fighting / till our park is free.”

Billy said, if necessary, they will lie down in front of bulldozers to block the destruction of East River Park.

“We have no choice,” he exhorted the crowd with an electric bullhorn. “The earth is telling us, ‘Be radical! Change America! Change New York!’ Earthelujah!”

Eileen Myles, the emcee of the amphitheater event, minced no words when she declared of the E.S.C.R. plan, “We know this is bulls—. … We know it’s development. Councilmember Rivera has betrayed us.”

Alicia Boyd of Brooklyn’s Movement to Protect the People really did not mince words as she slammed “greedy” developers and the mayor.

“F— you!” the crowd yelled back in agreement.

Boyd’s group is fighting a development project next to the Brooklyn Botanical Gardens.

Representing Manhattan’s original inhabitants, Daniel Strongwalker Thomas, who said he is the hereditary chief of the Delaware Nation Lenni Lenape, held aloft an eagle feather as he spoke. He noted that Corlears Hook, the amphitheater’s location, was the site of a massacre of Native Americans by the Dutch.

“There may be relics here that are my ancestors,” he said, noting such remains are federally protected.

Speaking of what’s in the park’s earth, Jesse Cerrotti of the Sierra Club, painted a darker picture. The park dates back to the 1930s.

“There are toxins here now from fill,” he said, “from gas plants that used to be here, from Williamsburg Bridge renovations.”

Nevertheless, he said, the park is home to 500 wildlife species, including 83 different kinds of birds, 10 of which are rare, plus hosts monarch butterflies and the rare northern golden bumblebee.

Attorney Jack Lester recently sued the mayor to get the city to reveal more information from a heavily redacted “value engineering study” that compared the berms plan to the elevated park plan. Within days of the lawsuit being filed, the city unveiled more parts of the report. However, some parts remain redacted.

The park activists say it’s critical to uncover this information so that they can find out what the city’s basis was for switching plans for the park and whether the decision was justified.

“Hopefully, we can reassemble here in a few months and celebrate our victory,” Lester said.

Although no politicians deigned to attend the protest, several candidates for office did, including Art Chang, who is running for mayor.

“Mother nature has her own plans and she laughs at the plans of men,” Chang declared. “As your mayor, I would push the pause button on this process so we could reevaluate.”

Erin Hussein, who is challenging Rivera in the June Democratic primary, gave a fiery speech. She accused de Blasio of presiding over “boondoggle after boondoggle.” She noted that her kids had played sports in the park and “played on the seals.”

“The park was a big part of their childhood,” she said. “I will stand up for this park. This [E.S.C.R.] plan erases this park for a generation of children — not de Blasio’s children, not a developer’s children.

Hussein accused Rivera of missing chances time and time again to join the opponents in challenging the park plan and calling for greater transparency on it.

Lindsey Boylan, who is running for borough president, said the lack of transparency for the reason why the park plan was switched is glaring.

Actually, there was one elected official at the protest, Arthur Schwartz, who is the Village Democratic district leader and is running to succeed Corey Johnson in the City Council.

Last year, Schwartz filed a lawsuit separate from Lester’s, arguing that an alienation vote was need for the E.S.C.R. project. A judge ruled against it, but Schwartz plans to appeal any day now.

A longtime Hudson River Park advocate, Schwartz noted that he learned a lot about environmental reviews while fighting to win sports fields for Pier 40, at W. Houston St. He recalled how the community of youth-sports parents later turned out in force to beat back a plan by the Related Companies to redevelop Pier 40 as “Vegas on the Hudson.”

“Related wanted to build a whole bunch of buildings [on the pier] and they said they would put the field on top,” he said. “Fifteen hundred parents came to a community board meeting — and the Related plan went away.”

Schwartz charged that the de Blasio administration, for some reason, clearly does not want any oversight of its plans for East River Park.

“The city has not wanted to go to the state Legislature for an alienation vote” on East River Park, he said. “They have something in mind. They don’t want [the Legislature] sitting on top of this plan.”

Schwartz, like others, scoffed at the city’s claims that the East River Park project — which the city has said it wants to start later this year — would only take three years to complete.

“This is going to take 10 years before they even get to planting [replacement] saplings here,” he predicted.

Chris Marte, who is running for City Council in Lower Manhattan’s District 1, noted that when he was 7 years old and a student at P.S. 20, his first field trip was to East River Park. He said he wants other kids to be able to enjoy the same experience.

Speaking of kids and sports in East River Park, emcee Myles chimed in, “Carlina likes to talk about how she did her Darryl Strawberry imitation in the park [playing Little League]. And she’s taking that away from kids. It’s so bulls—.”

Allie Ryan, who plans to run in the District 2 City Council general election, said, “My number one priority is saving this park.” She is also a co-founder of M.A.G.I.C., a group fighting to block Mayor de Blasio’s plan to develop a climate change center on Governors Island.

“We need to elect candidates who are going to put parkland first,” Ryan declared.

Whoever is elected city comptroller would have to O.K. the city’s paying for the massive coastal resiliency project. However, Reshma Patel, who is running for comptroller, said, “I would definitely not sign the check to destroy this beautiful park.”

She noted that that during the pandemic, she would take walks in East River Park.

“We need to have transparency,” Patel said, adding that, if she is elected, “you will not have redacted reports.”

The event ended with Ralphy CBS, a veteran Lower East Side deejay, spinning tunes from the amphitheater stage as some people hung around to dance.

Under the resiliency plan, it’s optional whether the amphitheater — the onetime site of historic hip-hop concerts — would be rebuilt. One option just calls for a sloped lawn there.