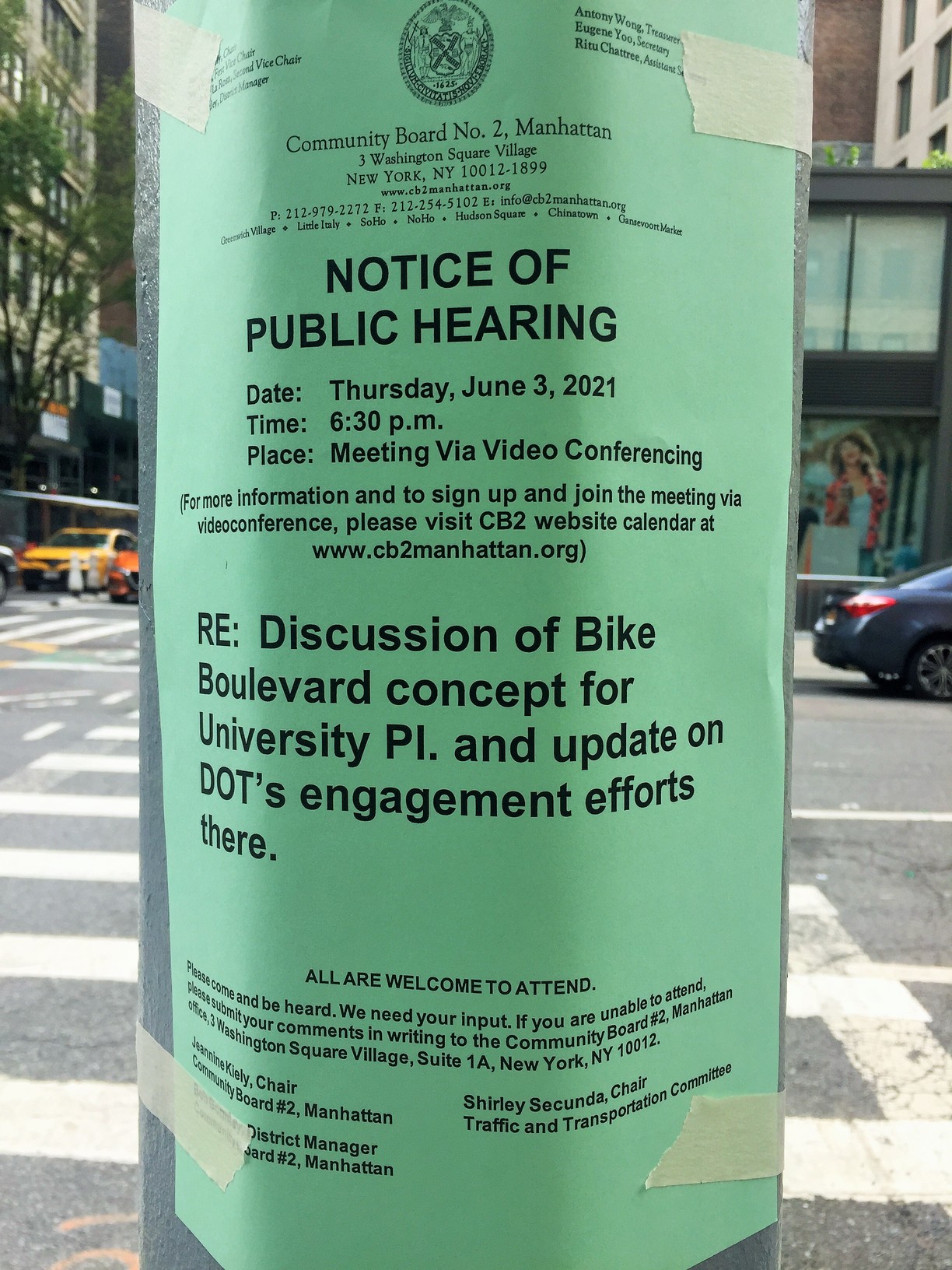 A Community Board 2 flier announcing a public hearing on a proposed "Bike Boulevard" to run the length of University Place. (Photo by Jefferson Siegel)

BY THE VILLAGE SUN | A month ago, when The Village Sun reported on the Department of Transportation doing community outreach for ideas for University Place, local stakeholders said their understanding was that any plan would not bar cars.

At that time, Shirley Secunda, chairperson of the Community Board 2 Traffic and Transportation Committee, said, “They’re not talking about booting cars off the street.”

But just four days after that article, Patch reported that Mayor de Blasio had announced that, in fact, University Place would become the city’s first “Bike Boulevard.”

There aren’t many details about exactly what a Bike Boulevard is, other than that it would “discourage cars from entering the space,” slow vehicle speeds and connect to existing bike lanes.

De Blasio’s first mention of Bike Boulevards was at his State of the City address more than a year ago back in February 2020. Perhaps the pandemic slowed down the plan’s rollout.

D.O.T. apparently is potentially eyeing the whole length of University Place — which stretches from 14th St. to Waverly Place, where it connects to Washington Square East — for the Bike Boulevard project. The one block from 14th St. to 13th St. was recently reversed to one-way southbound and made into a so-called “slow street,” with a squiggle-shaped road space forcing cars to drive through slowly.

This week, Secunda said she was taken by surprise by the Bike Boulevard announcement.

“As you know, the Department of Transportation has been conducting community outreach as part of a study to make University Place more responsive to neighborhood needs,” she said. “We’ve been under the impression that the study is still going on — it was supposed to be through the summer — and that D.O.T. will report on results before any steps are taken. Hopefully, we will find out more from D.O.T. at our meeting.”

Secunda said all that she knows about the idea is what she read in the Patch article, which noted that the mayor had offered “minimal details” about the initiative.

“This is all we know about it — in other words, we are in the dark,” Secunda said. “This is why we’ve asked D.O.T. to come to our meeting, to explain what this is about.”

Secunda’s committee will hold a virtual hearing on the issue at its meeting tonight, Thurs., June 3, at 6:30 p.m. For the meeting link, click here.

In another case of the mayor rushing to a decision on a local traffic idea, a few months into the pandemic, he abruptly declared the 14th St. busway permanent. His announcement on the busway came about halfway through its stated 18-month-long pilot-project phase, after which the community was supposed to be able to get a chance to weigh in on it.