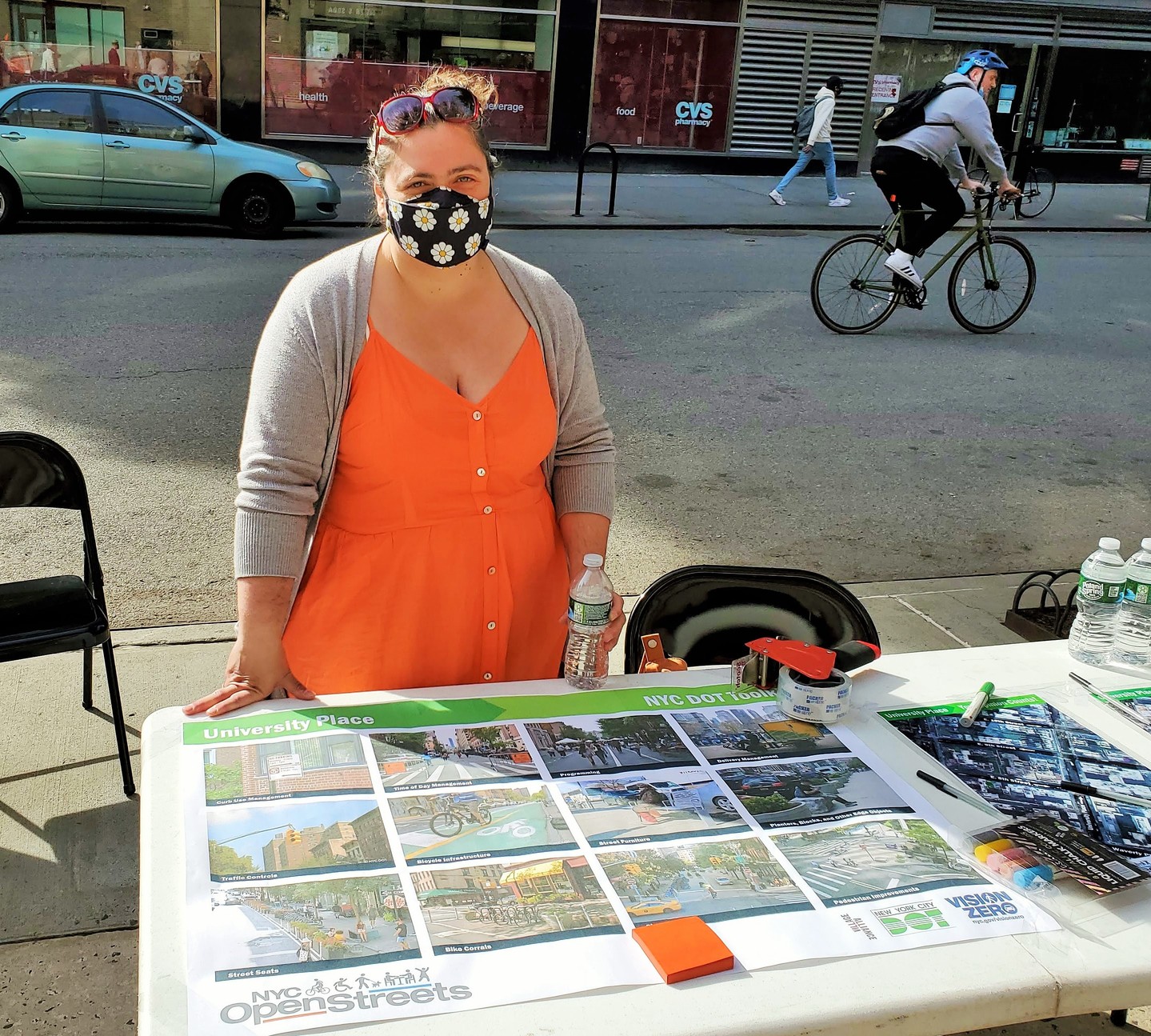 Jessica Cronstein, a representative from the D.O.T. Public Space Unit, was doing community outreach on Thursday about ideas for University Place. (Photo by The Village Sun)

BY THE VILLAGE SUN | What kind of place should University Place be, in terms of the physical street itself?

The city’s Department of Transportation is seeking people’s input and ideas on the Village thoroughfare’s future.

Jessica Cronstein, a representative from the D.O.T. Public Space Unit, was doing community outreach on Thursday at a table between E. Eighth and E. Ninth Sts. She will be back out there again on Sat., May 15, from noon to 4 p.m.

The Village Alliance business improvement district is assisting with the outreach effort.

D.O.T. has also been conducting an online survey for input on University Place and has received more than 400 responses so far. To access the survey, click here.

The agency’s goal, according to Shirley Secunda, chairperson of the Community Board 2 Traffic and Transportation Committee, is to make University Place “more responsive to the neighborhood and balanced for various user needs.”

The agency is looking at the length of University Place from Waverly Place to 14th St. In 2019, the block from 14th St. to 13th St. was turned into what is known as a shared street, meaning more of the roadway was made pedestrian space and cars are supposed to drive slowly on it. In addition, the block’s traffic direction was reversed from northbound to southbound.

According to the online survey for University Place, D.O.T.’s goal is “to create a safer public, enhanced realm” by employing various block types, from so-called basic, to slow, to shared, to pedestrianized plazas.

“The D.O.T. Public Space Group will be working with D.O.T.’s Engineering and Planning Groups concerning traffic, and with other departments, like D.O.T.’s Bicycle Division,” Secunda explained. “They’ll look at data and how people respond to the survey, and are also doing a merchants’ survey and counts. Access needs will be included and how to keep University Place a community street.

“They will be taking all uses and activities — like the Washington Square Art Fair and other events — into account,” she said. “They’re not talking about booting cars off the street. They’ll also consider parallel streets, side streets and impacts. They’ll make sure to accommodate loading and unloading — side streets, too — and will investigate what’s under the street, such as wiring.

“We’re very encouraged,” Secunda said, “that D.O.T. is doing this study, which will focus on community input, so that University Place can fully respond to neighborhood needs.”

University Place is currently part of the city’s pandemic-inspired Open Streets program, and the outreach is focusing largely on area residents out strolling the street. But D.O.T. also plans to reach out directly to commercial and office stakeholders.

If D.O.T. comes up with a proposal for University Place, it will bring it before C.B. 2 for review and recommendations.

William Kelley, the executive director of the Village Alliance BID, said the idea of the study is to “look at University Place with new eyes…to address all users, vehicles, pedestrians, bicycles. We’re in the information-gathering stage. The background is they did that reversal [between 13th and 14th Sts. a few years ago]. The street is pretty wide. There are no markings or bike lanes. They’re collecting information and will go to the community board later this summer.”

In addition to possibly a bike lane, the changes thus might also include a sidewalk extension to create more walking space, he speculated.

The BID currently has some planters along the street, helping to mark small pedestrian neck-down areas at the crosswalks, he noted.

However, Sugar Barry, a member of the Washington Square Association, expressed concern that the plans by D.O.T. would just make University Place a “party path” connecting Washington Square and Union Square. This would “change the neighborhood vibe,” she warned. But Kelley said that’s not the idea.

He said the current Open Street has been working great and that D.O.T. is not looking to fully pedestrianize University Place.

Echoing Secunda, he said, “There will still be cars.”