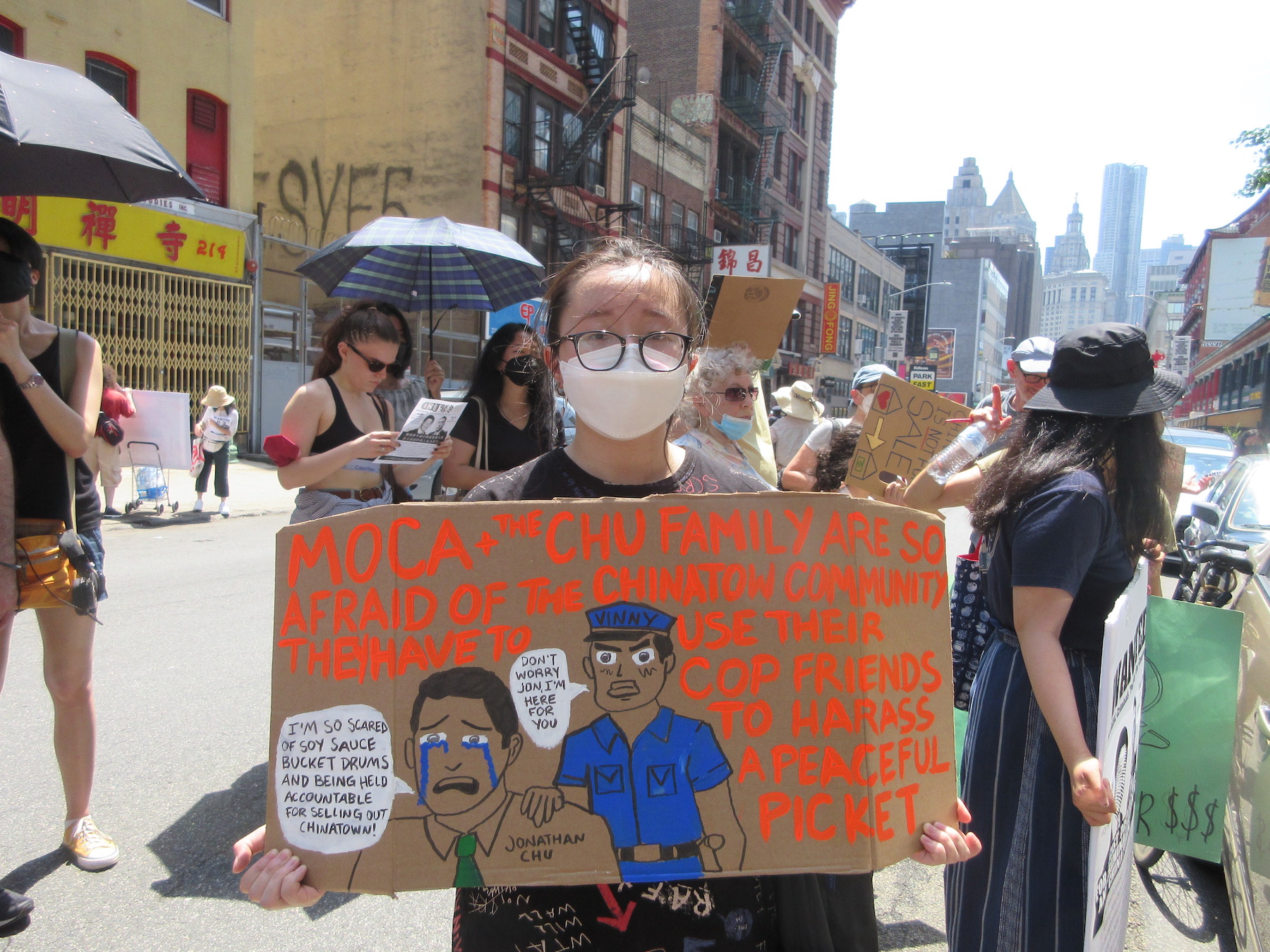 An activist at the May 22 march on MOCA and the Fifth Precinct. (Photo by Dashiell Allen)

BY DASHIELL ALLEN | Chinatown and Lower East Side activists protesting the Museum of Chinese in America say they recently have become the targets of harassment from police officers at the 5th Precinct for using soy sauce buckets as drums.

The protesters, who largely belong to the groups Youth Against Displacement, National Mass-Mobilization Against Sweatshops and the Chinese Staff and Workers’ Association, have been picketing outside of the museum, known as MOCA, during the past year, accusing its board president Jonathan Chu of evicting the Jing Fong dim sum palace.

The activists also accuse the museum for accepting a $35 million grant from the city’s Department of Cultural Affairs, which was a point of agreement during the approval of the city’s contentious borough-based jail plan.

On Sun., May 22 — one of the hottest days of the year so far, with temperatures reaching into the 90s — dozens of protesters marched against the museum and police precinct. “WANTED: The REAL Criminals “Policing” our Community” a poster advertising the event read, next to a picture of Chu and Vincent Cheung, a detective at the 5th Precinct who protesers allege is a personal friend of museum staff.

The Village Sun has reached out to MOCA for comment.

The week before the march, two picketers were banging on soy sauce buckets outside the museum when they were approached by an officer who warned them that if they did not stop “drumming” they would be issued summonses. The Village Sun captured the encounter on video.

“We’ve gotten complaints about protesting, yelling, chanting not involving drums,” the officer said. “For us, we’re like that’s not [an issue], you guys can protest. We’re here because there’s complaints involving drums. If there’s drums, it’s an issue we’re going to have to take up.”

He later clarified that “our issue is just the striking of drums or anything that’s making unreasonable noise with sticks and drums, and any object of that nature.”

This confused protesters, who argued that their verbal chanting was in reality as loud as, if not louder, than the drums. The two  picketers were later given summonses.

“Mayor De Blasio mentioned they’re gonna rebuild the jail and expand it, and money is gonna go to the jail, and another money is gonna go to the museum, because our museum burned down,” he told The Village Sun. “When they found out that we were getting millions, they’re saying now that that’s their money, so return the money to them. How can we return it if it was never theirs?

“When you’re that desperate that you’re marking people and calling them racist, and sexist, and no one in here is racist — we’re good people,” the guard added. “This is for the kids that want to learn about their heritage, that were born in America. They don’t care about that,” he said of the protesters. “They just want to get the millions that were given to us.”

The protesters’ demand is actually that the money be redistributed to struggling small businesses in Chinatown and the Lower East Side, as well as workers that have been adversely impacted by the pandemic.

“Cops and landlords don’t protect us! Working people, we defend us!” the activists chanted during the recent march, puncuating their shouts with “Jonathan Chu, shame on you!”

Louisa Velez, a 77-year-old resident of Jacob Riis Houses and a lifelong Lower East Sider, raised concerns about recent shootings in the neighborhood.

“When we need protection, the police are nowhere to be found,” she said. “There was murders last week of a 21-year-old man. Three more were shot. The cops were right there and didn’t do anything.”

At the same time, she said, “Right there, where I live in Jacob Riis Houses, they built a new luxury building on Houston Street that has its own shuttle van service, so that the rich residents don’t have to walk through our neighborhood. Why? Because they see all of us poor working-class people as criminals.”

Harriet Hirschorn, an activist with East River Park ACTION, was also among the protesters.

Another speaker, Diana, from the grassroots group Asians for Abolition, declared, “We live in a time when the system no longer needs white people to uphold white supremacy. Jonathan Chu and Vinnie Chung have eagerly stepped into the role.”

Da Hie, an activist from Queens, said, “We may be a long way from Chinatown, but we fight the same fight against racist bosses and their collusion with N.Y.P.D. and ICE in Flushing.”

The march began outside of the 5th Precinct on Elizabeth Street below Canal Street and ended in front of MOCA, at 215 Centre Street. On that afternoon, the police notably did not stop the picketers’ drumming, which continued unabated throughout the second half of the protest.