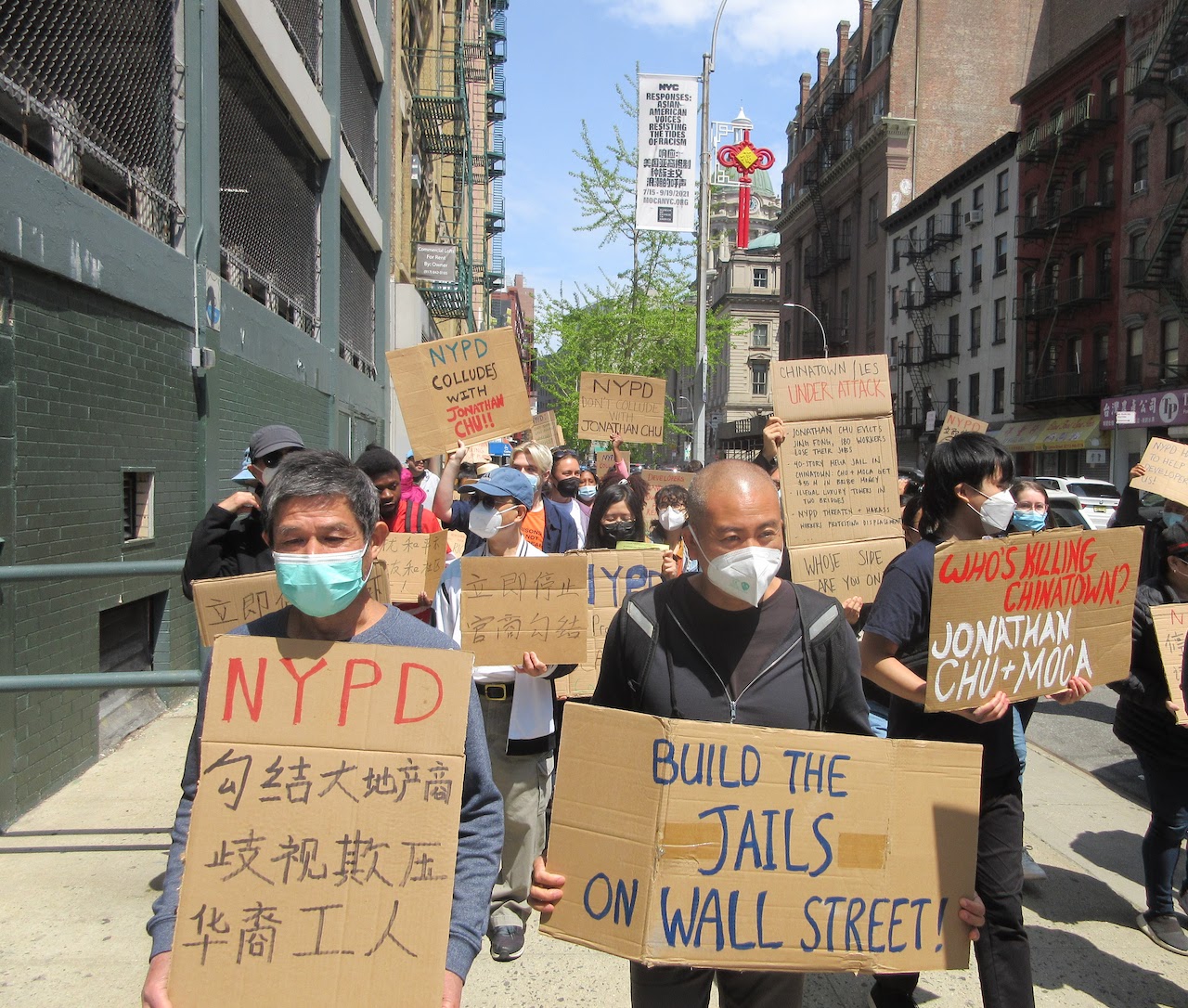 Bang Zhang, a former Jing Fong worker, at left, and other activists marched to the Fifth Precint on Saturday. (Photo by Dashiell Allen)

BY DASHIELL ALLEN | A group of about 50 protesters gathered outside of the Police Department’s 5th Precinct in Chinatown on Saturday afternoon, decrying officers for allegedly harassing them during their picket against the Museum of Chinese in America during the previous week.

The protesters belong to the Coalition to Protect Chinatown and the Lower East Side, made up largely of workers and volunteers from Chinese Staff and Workers Assocation (CSWA) and National Mass-Mobilization Against Sweatshops (NMASS). For the past year, they have picketed outside the Museum of Chinese in America (MOCA), at 215 Centre St.

The picket began in February 2021 when the chairperson of MOCA’s board, Chinatown landlord Jonathan Chu, evicted the Jing Fong dim sum palace, one of the neighborhood’s most beloved restaurants — and the last unionized one, employing more than 180 workers — from its longtime location.

Protesters also take issue with the museum for accepting a $35 million grant from the city, which was included as a “point of agreement’ in exchange for the construction of a new “megajail” in Chinatown.

According to Yolanda Zhang, an activist and coalition member, Last Saturday around 11:20 a.m., protesting laid-off Jing Fong workers were approached by a police officer, who, until Zhang arrived, was in the process of writing up summonses.

Citing noise complaints from the surrounding area, the officer confiscated drums the activists had been making to call attention to their protest.

“The workers are not English-speaking,” Zhang told The Village Sun. “So I came, I negotiated, and he had to say, ‘As long as you keep the noise at a reasonable level [everything’s fine].'”

She said they negotiated an agreement that the protesters could use smaller drums — that were actually plastic buckets.

However, the same officer returned two more times, confiscating the buckets and a folding table.

The Village Sun has reached out to the Police Department’s press office for comment.

Multiple activists told The Village Sun that they previously met with neighbors living across from MOCA, who took issue with their noise. They apparently came to an agreement to limit their drumming to a single hour (instead of three) and lower their overall volume.

A neighbor who lives across the street from MOCA confirmed to The Village Sun in an interview that the drumming has indeed decreased from three hours per day to one.
“I am very supportive of their right to be there and to be protesting, and we had asked them to not drum consistently for the health and wellness of the people in the area,” the resident said.
The neighbor has not filed any recent 311 complaints and was surprised to learn that the police were called.

Drumming has been an issue at other Downtown protests in recent years, including animal-rights activists’ demonstrations outside the Canada Goose store in Soho over the company’s use of coyote fur for hood fringes and down feathers for its coats.

On Sunday, activists from the Coalition to Protect Chinatown and the Lower East Side marched from MOCA to the 5th Precinct, at Elizabeth Street just south of Canal Street.

“Protesting is not a crime! Stop harassing the picket line!” they chanted. “Chinatown is not for sale!”

“There seems to be some confusion among the N.Y.P.D. about who the real criminals are,” said activist Jihye Song. “They seem to think that it’s peaceful protesters with our very dangerous weapons of soy sauce buckets,” she said, ironically, “deadliest weapon around.

“They seem to have forgotten who the real villains of Chinatown are. … It’s the real estate developers who build deadly luxury towers that threaten not just our home but our health and our lives.

MOCA itself disputes the protesters’ claims, writing in a statement that “A small network of affiliated community activist groups has mounted a campaign against jail construction and economic development in Chinatown,” and that “MOCA had nothing to do with Jing Fong’s decision to close its operations on Elizabeth Street.”

“We’re not going to stop. We are protesting to help the community,” said Bang Zhang, a former Jing Fong worker, who allegedly was almost written a summons, speaking through a translator.

After rallying, the protesters delivered a letter to the 5th Precinct’s commanding officer, Deputy Inspector Paul J. Zangrilli. It included four demands: “Stop harassing the Chinese workers and the community who protest peacefully, discipline Detective Vincent Cheung, who carried out the racist act, return the drums and the table confiscated from the protest [and] apologize to the community for your racism and support of displacement.”

MOCA itself recently announced plans to expand. The museum would demolish its current building to make space for a new facility designed by world-renowned architect Maya Lin, responsible for the Vietnam War Memorial in Washington D.C.

MOCA’s 68,000-square-foot new home is scheduled to open in 2025. Its exterior design is “inspired by the tangram, an ancient Chinese mathematical puzzle,” according to the museum’s Web site.

Refusing to be intimidated by the police or MOCA itself, the protesters vowed to continue their picket.