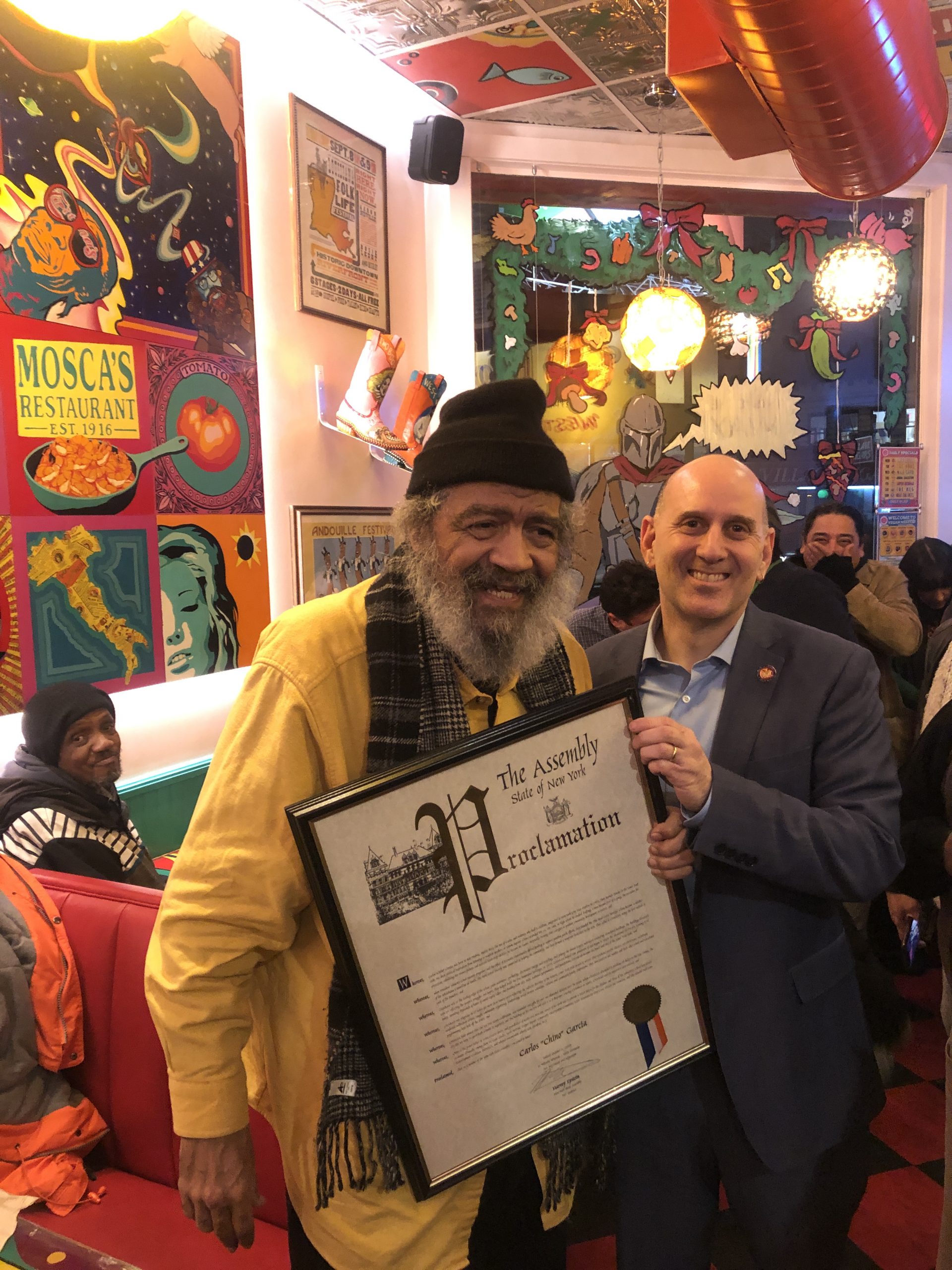 BY THE VILLAGE SUN | Carlos “Chino” Garcia, the executive director of CHARAS, was honored with a proclamation by Assemblymember Harvey Epstein at the Two Boots Pizza holiday party on Mon., Dec. 16.

Garcia was born in Rio Pedras, Puerto Rico. His family moved to New York City, eventually settling in the Baruch Houses on the Lower East Side. With the late Armando Perez and others, he formed CHARAS — the acronym composed of the first letters of their first names — a nonprofit dedicated to the arts and community activism.

In 1977, CHARAS took over the abandoned old P.S. 64, at 605 E. Ninth St. They dubbed it El Bohio, meaning “the hut” in Puerto Rico’s indigenous Taino language. They renovated it and turned it into a community and cultural center.

But in 1998, the city auctioned off the building and it was bought by Gregg Singer for $3.2 million. CHARAS — along with supporters who had handcuffed themselves together through PVC tubes in what’s known as the “sleeping dragon” tactic — were evicted from the building in late 2001. During the eviction, massed along the street outside to quell any protest was an intimidating army of scores of police in riot gear.

According to a Singer spokesperson, a private appraiser recently determined the former school building is now worth $200 million. However, the owner has been unable to redevelop the property in the past two decades, repeatedly blocked by community and political opposition.

Today CHARAS continues “in exile.” Meanwhile, Singer’s days at the old P.S. 64 may be numbered. Two years ago, Mayor Bill de Blasio announced at a Lower East Side town hall that the city was “interested in reacquiring” the building. And last year, Madison Realty Capital started foreclosure proceedings on the building after Singer failed to pay back a $44 million loan.

Epstein’s proclamation notes, “CHARAS was at the leading edge of the urban green movement, gardening, alternative energy and recycling, and joining the Sweat Equity movement renovating abandoned buildings. The buildings blossomed with art reflecting the people’s struggles and hopes, they helped build the first homestead buildings. In 1977, CHARAS helped take possession of and began to restore the abandoned old PS 64, naming it El Bohio. Investing thousands of hours of sweat-equity labor, and funding from city, state, national governments, and foundations, CHARAS became the heart and soul of the Lower East Side; and

“CHARAS held an annual Día Del Los Tres Reyes Celebration, with entertainment and gifts for over one thousand children over the years. When CHARAS attempted to purchase El Bohio in the late 1990s, the city did not keep its good-faith promise to negotiate, put the building up for auction and sold it to a developer.”

Phil Hartman, the owner of Two Boots, and Garcia go way back together. Hartman told The Village Sun, “Chino is an LES legend — huge thanks to Harvey for the beautiful tribute!”