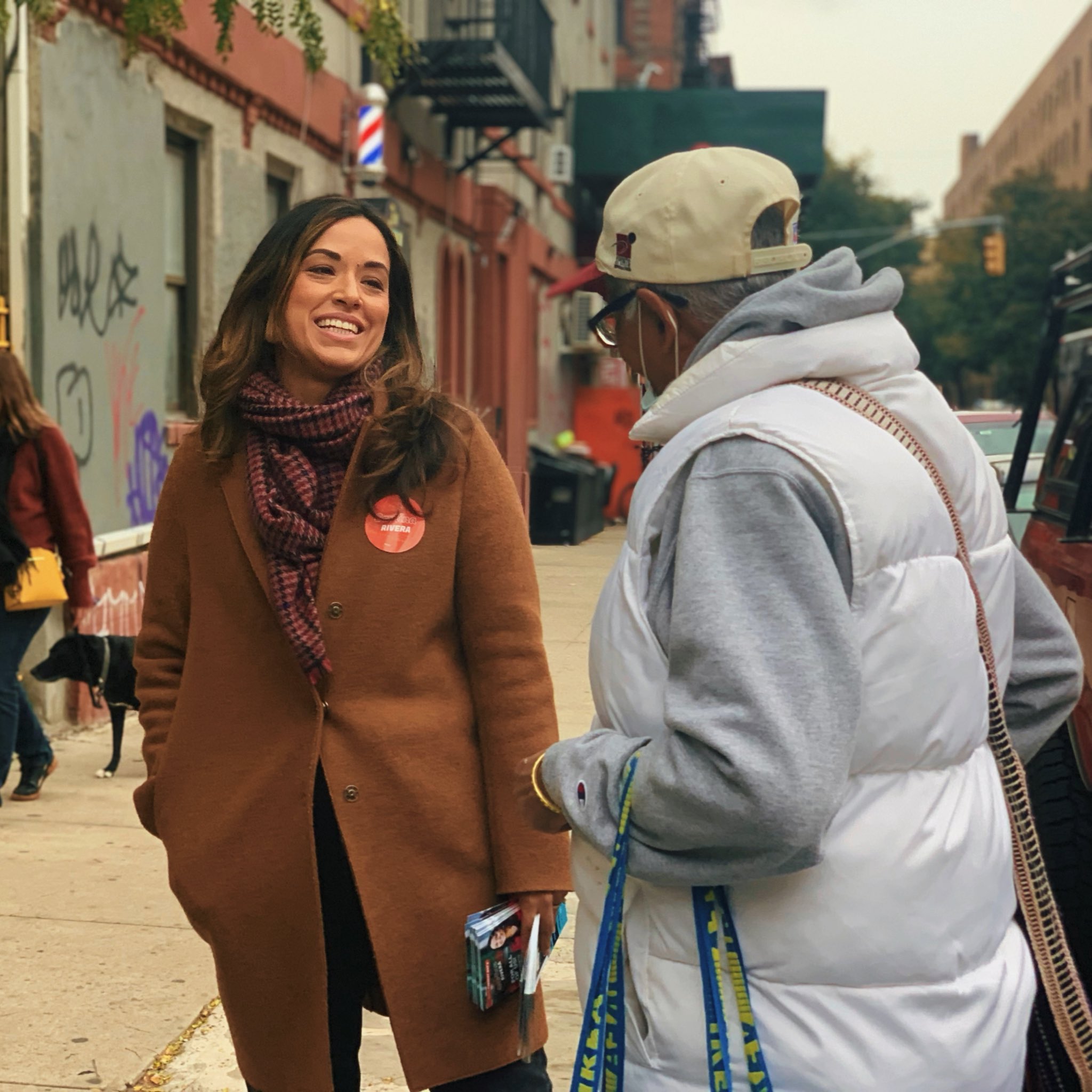 Tuesday night two hours after the polls had closed, with only 80 percent of precincts having reported results by that time, Ryan told The Village Sun she was not ready to give a statement on the election results yet and was waiting for more numbers to come in from the poll sites.

Rivera, meanwhile, declared it a “decisive” victory and called the results “a clear mandate.”

“As it was in the June primary,” she said, in part, in a statement, “our victory is decisive and shows a clear mandate for more of the progress we’ve worked so hard to make since I first took office in 2018: fighting for workers’ rights and dignity, increased access to culturally humble healthcare, safer and more livable streets for our communities, robust climate resiliency in all five boroughs, the protection and expansion of affordable housing, and a just and equitable pandemic recovery.”

Perhaps the climate resiliency in “all five boroughs” comment and use of the word “citywide” hint at Rivera’s aspiration of becoming City Council speaker, for which she is reportedly a leading contender. A large amount of turnover in the City Council right now due to term limits has Rivera well positioned to win the post. She added she is excited to soon be working with the first-ever “women-majority City Council.”

Gale Brewer, who is term-limited as Manhattan borough president and easily won election to the Council on Tuesday, is also said to be a leading contender for Council speaker.

“To all of District 2: Thank you for your continued faith in this Puerto Rican girl from the Lower East Side,” Rivera concluded. “I’m so proud to serve you, and I can’t wait to keep working together in pursuit of progress for the communities and the City we love.”

Thank you, District 2. I am so proud and grateful to announce that we’ve decisively won our re-election to the City Council.

Tonight’s win belongs to us all + mandates our continued pursuit of progress in our communities and citywide. My full statement ⤵️ pic.twitter.com/hEtVrmiJT9

In Lower Manhattan’s Council District 1, Democrat Christopher Marte comfortably fended off two challengers. With 99 percent of precincts reporting, he won 71 percent of the vote. Maud Maron, running on the Independent NY Party line and Republican Jacqueline Toboroff both got 14 percent. Maron also ran in the June Democratic primary in a crowded field, in which Chinatown District Leader Jenny Low finished second to Marte.

Marte posted a celebratory photo with supporters the day after the election.

Usually in New York City, candidates have a better chance of winning a Democratic primary election than they do in a general election running as a third-party candidate, since many voters automatically “darken the oval” for the Democrat.

Case in point, four years ago, Marte nearly upset the current District 1 councilmember, Margaret Chin, in the primary election, losing by a mere 222 votes. He then decided to run against Chin in the general election as a third-party candidate but faired worse, losing by more than 3,100 votes.

In this District 2 election cycle, though, Ryan chose to sit out the Democratic primary, instead focusing her energies against Rivera in the general election. Pagan, for his part, had tried to run in the Democratic primary but was knocked off the ballot by a petition signatures’ challenge by Michael Farrin, the East Village’s former Democratic State Committee member and a Rivera ally.

Farrin figures he has knocked Pagan, a perennial candidate — or attempted candidate — off the ballot at least a half-dozen times in the past for shoddy ballot petitions and says he is “annoyed” that Pagan keeps running.

Meanwhile, Erin Hussein, running against Rivera in the June primary, did a bit better than Ryan in the general election, winning 27 percent of the vote.

Speaking right before voting ended Tuesday night, Alex Bonine, a poll worker at the Theater for the New City on Election Day, said turnout at the venue, at First Avenue and 10th Street, had generally been pretty low except for a bit of a rush around midday.

The election’s big story, of course, was Brooklyn Borough President Erik Adams’s victory, by a margin of more than 2 to 1, over Guardian Angels founder Curtis Sliwa to become the city’s next mayor. Bill de Blasio must step down at the end of the year due to term limits.

In other races, Brad Lander won for city comptroller, Jumaane Williams was reelected public advocate, Alvin Bragg will be the next Manhattan district attorney and Mark Levine won the Manhattan borough president race with 85 percent of the vote.

In addition, three out of five ballot measures failed, with New York State voters rejecting proposals on election and ballot reform, including changing the redistricting process, plus allowing same-day voter registration and “no excuses” absentee voting. On the other hand, proposals to ensure clean air and water, as well as expand the cases that the Civil Court can hear were approved.

In the District 2 Council election, Ryan’s main campaign issue was saving East River Park from the destruction of the East Side Coastal Resiliency plan. Many of Ryan’s supporters were passionate and extremely fired up on the issue. On Monday, on the eve of the election, the candidate was arrested for doing civil disobedience at the East River Park tennis courts as city workers started to dismantle the site’s fencing to clear the way for the area to be demolished as part of the park project’s phase one.

Under the city’s plan, the existing East River Park would be buried under from 8 feet to 10 feet of fill soil and all of its nearly 1,000 mature trees felled.

But the fight over E.S.C.R. isn’t ikely going away just because of Ryan’s defeat in what was her first run for office. On Election Day, Village activist attorney Arthur Schwartz filed a motion in State Supreme Court seeking a stay on construction work in the park pending the Appellate Division’s decision on his lawsuit appeal that he made on Wed., Oct. 27. Schwartz said he expected to be in court Wednesday trying to obtain the stay.

The lawsuit argues that because the expected five-year-long resiliency plan’s main goal is to turn the park into a floodwall — which is not a park purpose — the project must go through an “alienation” vote by the state Legislature. The de Blasio administration, however, according to Schwartz, more recently changed its tune and is now trying to argue that E.S.C.R. is really being done for a “dual purpose” — to “save the park,” plus protect the surrounding neighborhoods from flooding. But the attorney says the city only made this switch of terms to try to skirt an alienation vote in Albany.

Rivera is a steadfast supporter of the resiliency plan. In a statement to The Village Sun on the eve of the election, she said, “We’re ensuring access to green open spaces for generations to come, while also maintaining what neighbors love about the park now. East River Park will never fully close [during construction for the E.S.C.R. project], additional green recreational spaces will open in the community, and most importantly, we will protect our neighbors from the most devastating consequences of the climate crisis.”

Farrin, the former State Committee member, who is a member of CoDA (Coalition for a District Alternative), Rivera’s home political organization, speculated on where opponent Ryan got most of her support. He said it was likely from “Avenue B to the river” and that the park issue was significant for these voters.

“I was interested in looking at [the election results for] Village East Towers,” he noted, “because that’s always been a stronghold, but a lot of them got into the resistance over the park.”

But that concern over the resiliency project was not felt throughout the rest of the district, he said. East River Park’s northernmost point is E. 13th Street.

“That issue doesn’t resonate above 14th Street,” he said.

In fact, Farrin said, it was during Hurricane Sandy’s aftermath, when he saw Rivera, then an organizer for GOLES, out on the street with a bullhorn assisting people and helping get food to the elderly, that he grasped her potential as a political candidate.

“During Sandy she was a hero,” he said. “She really, really took control of things. It was then I realized, ‘This woman has some leadership skills.'”