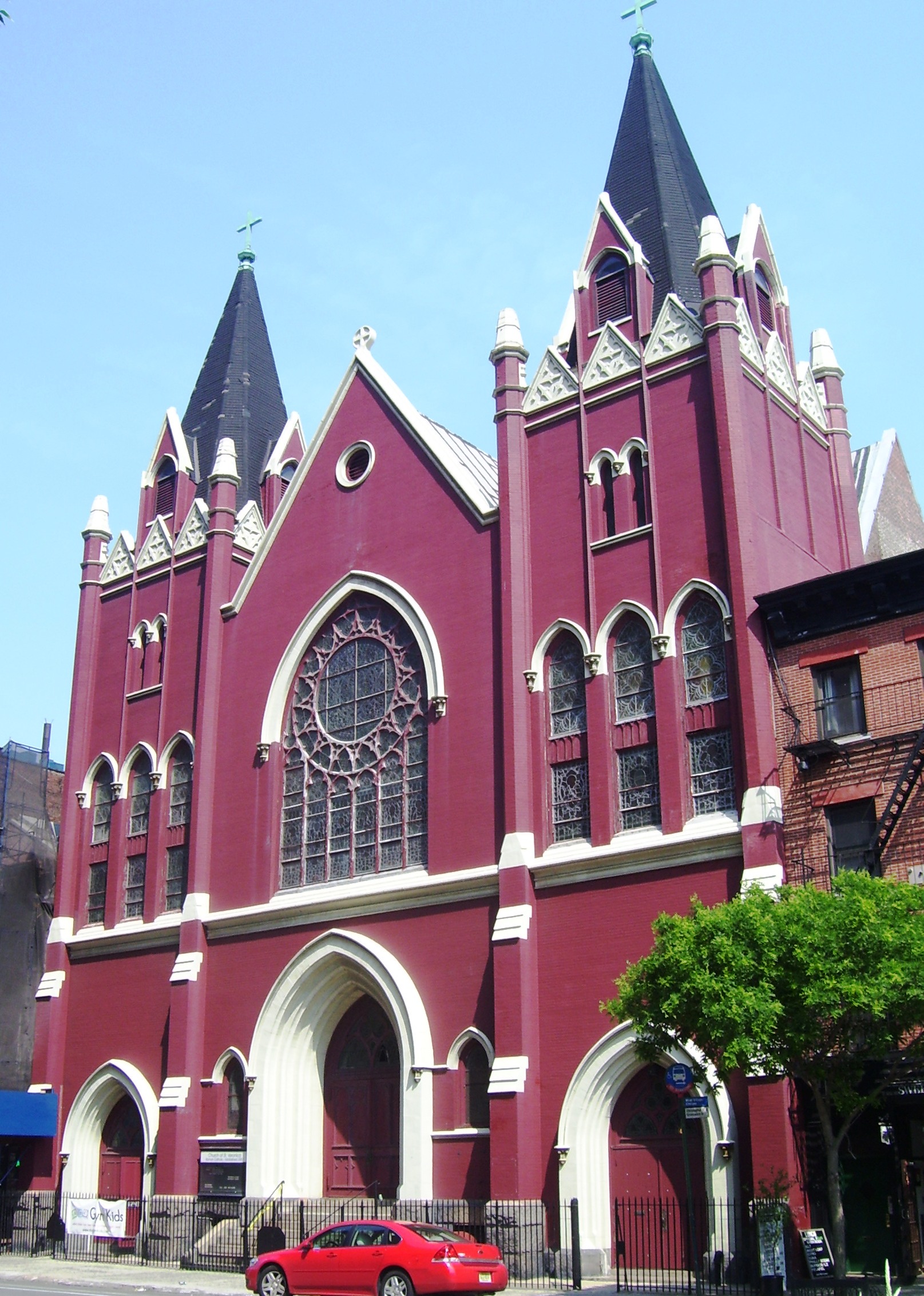 BY LINCOLN ANDERSON | The New York Archiocese has gone rogue. It’s planning to permanently close and sell off a landmarked Greenwich Village church — defying the apparent wish of the Vatican that the historic house of worship should stay open.

In July 2020, Cardinal Timothy Dolan backed off from the archdiocese’s plan, announced two years earlier, to close St. Veronica’s Church, on Christopher Street between Greenwich and Washington Streets. Parishioners had appealed the closing to the papacy and, reportedly sensing Rome would side with the congregants, Dolan shelved the sale — for that moment, at least.

After the archdiocese backed off, the plan was for St. Veronica’s then to become what is known as a sanctuary. There would be two Masses held per year, including one celebrating the church’s dedication on June 7, 1903, and the other on St. Veronica’s feast day in February. The church would also be open during the week for meditation and quiet prayer.

But since a celebratory Mass last June 7 to fete the church’s salvation, it has never opened its doors again.

St. Veronica’s new pastor was to be Reverend Jesus Ledezma of Our Lady of Guadalupe/St. Bernard’s Church, on W. 14th Street, who was to do double duty by also serving the Christopher Street church.

However, one month ago, Ledezma, speaking at St. Bernard’s, announced that St. Veronica’s, in fact, would be closing.

The archdiocese did not response to a request for comment.

Members of the St. Veronica Moving Forward Committee, who have been fighting the church’s closure since 2017, were blindsided by the news. They are currently constantly scouring  the archdiocese’s Web site to see if it has posted a signatura, an official notice that the church will close — after which they have just 10 days within which to file their remonstratio, or objection.

“Our lawyers out in Ohio and in Rome have been informed what is going on,” said Cindy Boyle, St. Veronica’s longtime cantor and a member of the committee. “The archdiocese has not published, anywhere that we can find, an official decree of the closure.”

Their pro bono Ohio lawyer is with the St. Joseph Foundation, which only does canon law.

St. Veronica’s is located in the landmarked Greenwich Village Historic District Extension, a three-block area designated in 2006. So at least the church would seemingly be protected from demolition.

“It’s worth a massive amount of money — it’s Greenwich Village,” Boyle said of the Christopher Street church. “They could gut it and turn it into fancy condos, but they can’t tear it down.”

Boyle noted that the Vatican must approve any sale of Church property of more than $7.5 million.

“Of course this will be [more than that],” she said.

Dolan’s pulling out from the sale idea two years ago, only to come back now and try to unload the property, is not suprising at all to the church’s defenders.

“He did an end around,” Boyle said. “They don’t give the red hat to dummies. He’s a very smart man,” she offered, though adding, “It really bothers me that someone in his position would be that sneaky.”

St. Veronica’s was built by Irish longshoremen and their families. At the church’s opening in June 1903, the dockworkers and their families, who had made great financial sacrifices to finish the 13 years of construction, celebrated with a boat trip up the nearby North River, as the Hudson River was variously known back then.

Also of concern, if the church can’t be saved from a sale, is the fate of its historic AIDS memorial, which was installed during the depths of the health crisis. Installed in its own sanctuary in the building’s balcony, the memorial has 600 inscribed nameplates commemorating those who succumbed to the deadly virus.

Mother Teresa attended the St. Veronica’s AIDS memorial’s consecration on June 26, 1992. Peforming as the cantor that day was the highlight of Boyle’s life.

“I sang for her,” Boyle recalled. “I sang the song she wrote. It’s called “Mother’s Meditation.” On my deathbed, I will smile remembering singing for Mother Teresa.”

Word of the plan to close the church also had started to trickle out after there were reports that its AIDS memorial would be moved to St. Francis Xavier Church, on W. 16th Street in Chelsea.

“We heard it through the grapevine that the church was closing and the AIDS memorial would be stripped out and sent to St. Francis Xavier,” said Terri Cook, another member of the St. Veronica’s Moving Forward Committee. That would at least be some consolation since, as Cook recalled, the St. Veronica’s pastor before Ledezma wanted to just chuck the memorial into the garbage.

That former pastor’s shoddy process in moving to shut down St. Veronica’s the last time around actually aided the fight to save the church, in that he did not follow the regulation procedure, according to Cook.

Other parties, as well, have also requested the church’s AIDS memorial, including the Sisters of Charity — the group that formerly ran St. Vincent’s Hospital — and the Church of St. Luke in the Fields, on Hudson Street in the Village. The Sisters of Charity are connected with the College of Mount Saint Vincent, in the Bronx, so if the memorial went there, it would leave the borough.

“You don’t want it up in Riverdale,” Cook said, though adding of the Sisters of Charity, “They did a tremendous service to the gay community during the AIDS epidemic.”

Meanwhile, some don’t like the idea of the AIDS memorial being in a house of worship.

“The gay community said, ‘Why does it have to be in a church?'” Cook noted. “‘Why can’t it be on neutral territory?’ It really belongs to the gay community. They paid for the plaques. All St. Veronica’s did was give them the space.”

As she recounted, it was St. Veronica’s Father Kenneth Smith in 1991 who O.K.’d the idea of the AIDS memorial. Candlelight marches had been going down Christopher Street past the church for vigils by the river since 1986.

“It was still a time of fear,” Cook recalled. “People [with AIDS] had to hide it. People forget. It was really bad, there was no medication. St. Veronica’s was the only place where people could go to mourn. The Jesuits were open to all people, so they wanted it.”

The memorial has a power, she said, noting, “It’s very touching when you look at all those names, it’s chilling.”

On the other hand, Cook said, the Church, for its part, doesn’t really care for the AIDS memorial.

“They have stripped the church of the statues and the organ,” she said of St. Veronica’s. “So now they want to strip the AIDS memorial out of it. As you know, the Catholic Church doesn’t really like homosexuality.

“We’d like it to stay in St. Veronica’s and we’d like to keep the church open,” she said of the memorial. “Otherwise, let the gay community decide what they’d like to do with it. It’s theirs. It’s a very important monument and a very important piece of gay history.”

The committee members are deeply frustrated at the recent turn of events, especially after they already put in so much work fighting to save the church the last time around.

“We went to all this effort to go to Rome, to appeal to Rome,” Cook said. “We hired an Italian lawyer.”

After the church was spared from being sold two years ago, parishioners were pushing for more that just two Masses per year, hoping for restoration of regular services.

“When COVID passed,” Cook noted, “St. Veronica’s was to be opened for weekend Masses and private Masses and prayer. This did not happen.”

Meanwhile, though, every Sunday at 1 p.m. at St. Veronica’s, a group still does continue to say Mass — on the sidewalk out front.