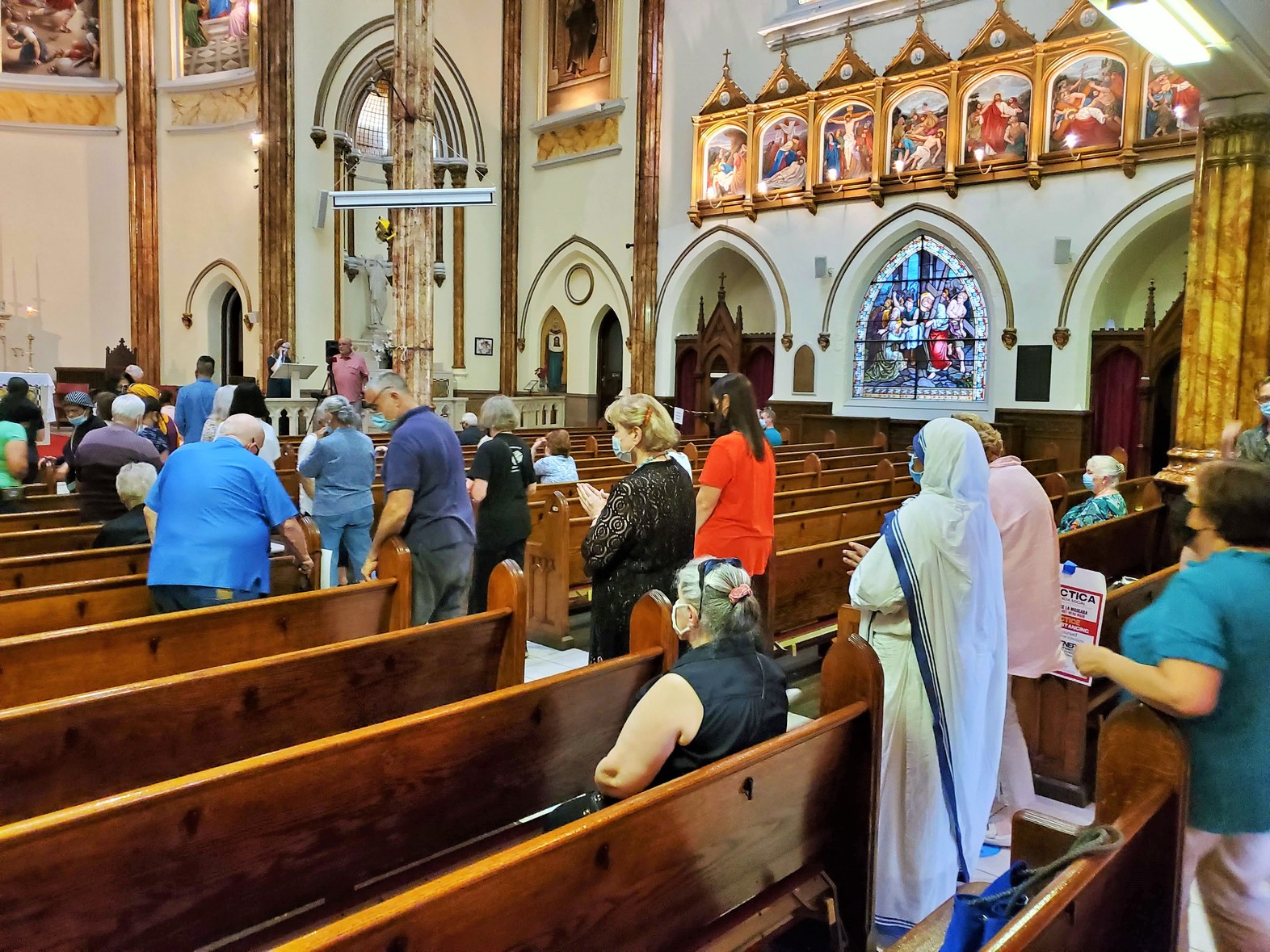 Congregants lined up for communion at St. Veronica's Church on June 7 at its first Mass since 2017. (Photo by The Village Sun)

BY LINCOLN ANDERSON | You can’t fight City Hall — or the New York Archdiocese, for that matter — or so the saying goes.

But a group of Downtown church activists has defied the odds, saving a historic Greenwich Village church from an unknown fate — though luxury apartments seems to be the trend for decommissioned Manhattan churches nowadays.

On June 7, locals gathered for a commemorative Mass at St. Veronica’s Church, on Christopher St. between Greenwich and Washington Sts., to celebrate the victory.

The church’s last official services had been on June 25, 2017. Afterward, parishioners were expected to attend Our Lady of Guadalupe at St. Bernard’s Church on W. 14th St. between Eighth and Ninth Aves.

However, a group of St. Veronica’s faithful, dubbed the St. Veronica Moving Forward Committee, rallied to have the church reopened. Using a canon lawyer, they took the case all the way to the Vatican.

As it became clear that the Papacy would support the parishioners’ plea, Cardinal Timothy Dolan, last July, rescinded the Village church’s decree of closure. St. Veronica’s was removed from the archdiocese’s sale list — permanently, the activists hope.

So, for now, at least, St. Veronica’s has been saved from becoming high-end housing, unlike the former Our Lady of Vilnius Church, at Broome and Varick Sts., and the former Church of the Nativity, at Second Ave. and Second St.

For the meantime, St. Veronica’s will be what is known as a sanctuary. There will be two Masses held per year, including one celebrating the church’s dedication on June 7, 1903, and the other on St. Veronica’s February feast day. The church will also be open during the week for meditation and quiet prayer.

The standard Mass on June 7 included singing and readings from the New Testament from Paul and Luke. The church’s new pastor, Reverend Jesus Ledezma, was on hand. St. Veronica’s will share him with Our Lady of Guadalupe/St. Bernard’s.

Also speaking at the Mass was Reverend Kevin Nelan, from the Church of the Immaculate Conception, at E. 14th St. and First Ave., who is the vicar for Lower Manhattan. Nelan noted that at one time 80 percent of New York City’s Catholics lived below 14th St., but now it’s 5 percent.

Speaking of history, St. Veronica’s has a lot of its own. The church was built by Irish longshoremen and their families. The parish, founded in 1887 in a local warehouse, laid its cornerstone in 1890 on the present site and first opened a lower church for the neighborhood. At the completed church’s opening in June 1903, the longshoremen and their families, who had made great financial sacrifices to finish the 13 years of construction, celebrated with a boat trip up the nearby North River, as some still variously called the Hudson.

Inside the church, there are plaques on the back walls in remembrance of those who served in America’s wars since World War I. The lower balcony contains an AIDS memorial with 600 plaques to victims of the scourge, which was used as a place to mourn and remember. Always a compassionate church, on 9/11, St. Veronica’s opened its doors and welcomed soot-covered Lower Manhattan workers who streamed up the West Side Highway seeking refuge.

Terri Cook, who collected the above history, played a leading role in the St. Veronica Moving Forward Committee’s effort to get the church taken off the sale list.

An East Villager who formerly worked in the fashion industry, Cook found herself in St. Veronica’s one day in the early 1980s. She kept coming back.

There is also a rectory nearby staffed by Mother Teresa’s Missionary Sisters of Charity that served as a hospice during the AIDS crisis.

“Many were buried from this church,” Cook recalled. “They’re all gone. Some moved away. Not all of them died, thank God. We always had the church open for Gay Pride. People would go up and sit [at the AIDS memorial], many mothers. It was very emotional.”

A scholar of houses of worship, she explained that Irish churches typically had a large crucifix at their center, Italian churches featured the Madonna and German churches had the apostles. The large crucifix that was at St. Veronica’s before it closed in 2017 is missing.

Two months after 9/11, Cook published a book, “Sacred Havens: A Guide to Manhattan’s Spiritual Places.” She also published a similar one about Brooklyn.

More recently, George Capsis, the publisher of WestView, a monthly newspaper, tried to help save St. Veronica’s by having music concerts there. But the effort ran out of steam.

Cindy Boyle, who sang as the cantor at the Mass last month, served as the procurator in the dealings with the Vatican, which basically meant a lot of paperwork.

“There is a thorn in the cardinal’s side with my name on it,” she quipped.

A former Barrow St. resident, Boyle was walking by St. Veronica’s with her dog one day in the 1980s and, like Cook, came in. She has been the cantor ever since.

As for what comes next, the committee members say they are now awaiting a plan from the New York Archdiocese.

Joanne Kennedy from the East Village’s Catholic Worker said she would like to see the Greenwich Village house of worship used more often.

“I don’t know. We’ll see,” she said. “Having Mass one time a year does not a sanctuary make.”

However, she noted that the archdiocese takes “the long view” on its real estate holdings, meaning it might well still hope to sell the church at some point. The Church of the Nativity on Second Ave., for example, was sold to developers for $44 million.

“I don’t mind that they closed it as a worship space,” she said of Nativity. “Using it for luxury housing is an affront.”

Kennedy and Cooper Square activist Valerio Orselli are active in fighting to keep shuttered Catholic churches from being redeveloped into luxury housing. They feel that, in keeping with the Church’s mission, the properties, if not reused for religious purposes, should become affordable housing for low-income and working-class people.

Their next struggle will be to redevelop St. Emeric’s Church, on Avenue D between 12th and 13th Sts., as 100 percent affordable housing.

In a similar vein, Cook said that St. Veronica’s was a working-class church of Greenwich Village.

“We’re an offshoot of St. Joseph’s,” she noted, referring to the church at Sixth Ave. and Washington Place.

“There were two Villages,” she explained. “The farther west you went, the poorer you were. This is one of the poor churches.”

Speaking of going west, Cook expressed special thanks to Andrew Berman, the executive director of Village Preservation, who led the effort to extend the Greenwich Village Historic District into an additional three blocks along part of its western edge in 2006. That meant the church, which was within the historic district extension, was now landmarked and protected from demolition.

“He’s the one that really saved us,” she said of the preservationist.

Cook was gladdened by the turnout at the celebratory Mass.